Ethics: The sound of silence 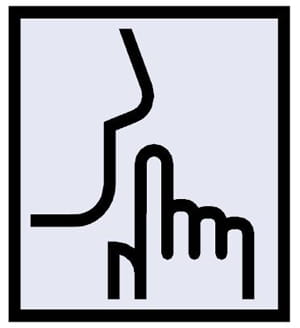 I HAVE always been interested in the ethical imperative to speak up and the influences that can make it more or less easy to raise one’s voice. Many years ago, my choice of PhD subject was prompted by a passing conversation with a GP about the overwhelming challenges he had faced when he raised concerns about the clinical setting in which he was working.

I have worked with hundreds of students and junior doctors over the years who have shown courage and integrity in their willingness to question others; even when to do so has risked, or has actually had, an adverse personal impact. I have run forum theatre sessions at which people can "rehearse" and practise speaking out, acknowledging the gap that so often exists between knowing the right thing to do and being able to do the right thing in practice. Yet, it has been staying silent that has preoccupied me recently.

For the last two months my phones have rung constantly and my email box has become unmanageable. Calls and messages have come in from across the world asking for comment, opinion and contributions on what was invariably described as "the Charlie Gard case". I have often taken part in programmes and written for the national press on medical ethics. However, on this occasion I was clear that, for me, this was not something about which I wanted to speak publicly. Initially, it was a simple, unshakeable intuition that to do so would not sit well with me. I hadn’t articulated why, but I knew it to be my view.

As the days and weeks passed, I regularly saw and heard friends and colleagues speaking in the media with compassion and clarity about events at Great Ormond Street Hospital and in the High Court. Nonetheless, I remained sure that to remain silent was, for me, the better option. Quite simply, I believed that I did not, and could not, know what anyone in this most tragic of situations was experiencing. I imagined that everyone, staff and family members alike, were devastated and overwhelmed. The public nature of what was happening must only have exacerbated the emotional pressure for all involved.

Crucially though, I did not know what had taken place in the preceding months nor how those interactions had been perceived by the people directly involved. I did not know why or how these private sorrows had come to be considered by the court. As the judgments appeared from the different stages of the legal process, it was clear that many of the people commenting and reporting on what had taken place were doing so, inevitably perhaps, from a position of partial knowledge. Some who were passionate in their commentary appeared, surprisingly, not to have read the judgments at all.

I reflected on what value might be added by me commenting, even in the most general terms, on a situation where vulnerability, distress and despair were palpable. I concluded that there was nothing that I could add that would be anything other than superfluous and maybe even damaging. I was alarmed by the weight others afforded to my opinion: journalists, friends, taxi drivers and even my hairdresser all asked “what I really thought” about that morning’s headlines. I politely refused to be drawn into those conversations, but the seemingly insatiable appetite for such discussion was a sharp reminder of the power of perceived "expertise" and the obligation we all have to use it wisely.

I am not critical of those colleagues and friends who responded to journalists more positively than I did. My silence is no more "right" or "ethical" than others’ decisions to contribute to debates, news programmes, interviews and editorials. Whether to speak publicly or to remain quiet is a matter of judgement and a personal decision. And, of course, not all invitations are equal: some journalists, programmes and publications are more considered, careful and thoughtful than others. There are sound reasons why people have spoken publicly over the last few months, including the value in raising public awareness of the ethical dimensions of practice, clarifying and explaining clinico-ethical decision-making, exploring whether the current approach to disagreement in the clinical setting is effective and so on.

Yet, for me, those and other potential gains were irrelevant in the face of tragedy and suffering. This was not a time for more words. It was a time for compassionate silence.