Courts often rely on the Bolam test when considering claims of clinical negligence. But who was Mr Bolam and how did his legal case change medical practice?

JOHN Hector Bolam was running out of options in the summer of 1954. He had been suffering from depression for more than a decade and now voluntarily admitted himself to the Friern Psychiatric Hospital in London. What happened to him there would have consequences for medical practice both in the UK and around the world, and would define the law on negligence for decades to come.

Bolam was born in County Durham at the very start of the 20th century. Unfortunately, this meant that he belonged to the generation that found itself of age to fight in both World Wars.

During the Second World War, he had been commissioned in the Royal Engineers, but because of his depression was invalided out of service in 1942. His mental health did not improve, and in 1954 he attempted suicide and was admitted for the first time to Friern Hospital. He is reported to have made a good recovery with rest, was discharged and returned to work as a car salesman in London. However, only six weeks later he relapsed and found himself again in need of in-patient care at Friern. On this admission, he was examined by a consultant psychiatrist attached to the hospital and a course of electro-convulsive therapy (ECT) was recommended.

Mr Bolam was asked to sign a consent form for the procedure, which he duly did, and his first treatment was uneventful. However, during his second treatment, which was administered by a senior registrar in the hospital, Bolam suffered serious injuries. ECT is designed to induce a seizure in the hope that this will provide relief from major psychiatric illness. During the procedure, Mr Bolam was supine with a pillow placed under his back and his chin supported, and a gag in his mouth. Otherwise, he was unrestrained, although a male nurse stood on each side in case he should fall from the couch. Importantly, no anaesthesia or muscle relaxants were administered prior to his treatment. This form of ECT is known as unmodified and even in the 1950s was falling out of favour.

During this second course of ECT, Mr Bolam sustained severe physical injuries as a result of the induced seizure. He dislocated both hip joints with bilateral fractures of the pelvis, which were caused by the head of the femur on each side being driven through the acetabula of the pelvis.

As a result of his injuries, Mr Bolam took legal action and sued the hospital management for damages. He claimed that the hospital had been negligent in allowing the doctor to perform ECT without first administering a muscle relaxant or providing appropriate restraints. He further contended that the doctor had failed to warn him of the risk of fractures during the procedure, which although small was well-recognised, especially as there had been six other cases of unilateral fracture following ECT in the same hospital.

The case came to court in February 1957 and was heard by Mr Justice McNair. A variety of medical opinion was sought by both sides and what was revealed in court were marked differences in practice. Bolam called a distinguished psychiatrist who remarked that the decision not to provide manual restraint was “foolhardy” and stated that it was his practice always to warn patients of the hazards of ECT. Other expert witnesses offered contrary views and several concurred that it was unnecessary to inform patients of the risk of fracture and agreed that Bolam’s doctor had acted appropriately.

One consultant psychiatrist said: “I have to use my judgment. Giving the full details may drive a patient away. I would not say that a practitioner fell below the proper standard of medical practice when failing to point out all the risks involved.”

Some argued that the use of muscle relaxants and any form of general anaesthesia (so-called modified ECT) rather than being desirable was in fact potentially dangerous and maybe even fatal.

Not the man on the Clapham omnibus

In the course of his summing up to the jury, Mr Justice McNair, made the following remarks on the standard of proof in a negligence suit:

He went on to enunciate the principle, which is at the heart of what is now called the Bolam Test:

Applying this principle, the jury, while expressing their sympathy for Mr Bolam, found for the defendants.

Criticisms of the Bolam Test

This principle underpinning the definition of clinical negligence would be used for the next 50 years and would be upheld by the House of Lords in several important test cases. However, it was not the only case to address this issue. Two years earlier in Scotland, Hunter v Hanley set down broadly similar though not identical principles. These judgements have not been without criticism and have required modification by the courts over the years. When applying the Bolam Test, as originally set down, an act of alleged clinical negligence had to be compared with what was done in standard practice, rather than what perhaps should have been done. Thus, strictly applying the Bolam Test, if bad practice was the norm, no negligence could be proved.

Some felt that this approach stacked the odds against any patient who claimed clinical negligence. In 1997, a House of Lords ruling on another case (Bolitho v. City and Hackney Health Authority) applied the Bolam Test but sought to clarify it by offering a modification. Where there are conflicting bodies of expert medical opinion, if the actions proposed by a body of responsible doctors is not demonstrably reasonable and cannot withstand logical analysis in the court, it will not necessarily constitute a defence. In other words, you cannot defend against negligence on the basis of a practice just because it is current – it also has to be reasonable or logical.

The biggest rejection of the Bolam Test came with the Supreme Court ruling in Montgomery v Lanarkshire Health Board (2015) in relation to consent. That ruling considered a clinician’s duty of care to warn of ‘material risks’. The test of materiality was defined as whether “a reasonable person in the patient’s position would be likely to attach significance to the risk, or the doctor is or should reasonably be aware that the particular patient would be likely to attach significance to it”.

Accordingly, rather than considering which risks a doctor should discuss with a patient exclusively from the doctor’s perspective, the ruling brought the law in line with contemporary guidance from the General Medical Council and refocused this aspect of consenting discussions firmly on the patient.

In that courtroom in 1957, medico-legal history was made, but one man, the unfortunate patient at the centre of it all, hobbled out despondent. The judge, who had described Mr Bolam as being in a “hopeless condition” in the witness box, where he “told the tragic story of [his] sufferings and his experience” could offer him no damages. What he did offer him, however, was a form of immortality. Mr Bolam has now been dead for several decades, but the principle that bears his name, and which deprived him of any compensation for his injuries, lives on. 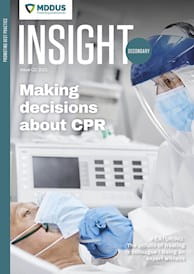