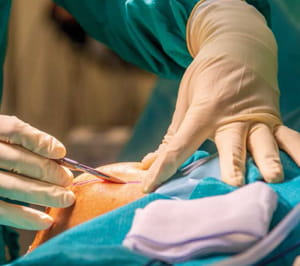 AROUND 312 million surgical operations are performed each year worldwide and every time a patient goes under the knife there is an associated risk of morbidity and death. An estimated 16.8 per cent of surgical cases develop complications and 2.8 per cent die before leaving hospital, according to one study.1

Many factors influence surgical outcomes – both technical and non-technical – but up to half of adverse events are thought to be due to provider or system-wide shortcomings. Various measures have been tried to improve surgical team performance but perhaps the best known internationally is the WHO Surgical Safety Checklist.

The checklist was first introduced in 2008 and the World Health Organization describes it as a “simple tool designed… to bring together the whole operating team (surgeons, anaesthesia providers and nurses) to perform key safety checks during vital phases of perioperative care: prior to the induction of anaesthesia, prior to skin incision and before the team leaves the operating room”.

Many of the 19 items on the checklist were already routine in most hospitals, such as confirming patient identity, marking the side/site of surgery, checking allergies and the need for antibiotic prophylaxis, and undertaking postoperative instrument and swab count. The crucial element is ensuring a consistent approach to checking that all these basic safety measures are undertaken.

The checklist was introduced in Scotland in 2008 as part of The Scottish Patient Safety Programme (SPSP), which is a national initiative established to improve in-hospital mortality rates. Perioperative management, including implementation of the WHO surgical checklist, was one of four key initial work streams of the programme, which seeks to “change the healthcare culture to one that has patient safety at its forefront”. Use of the checklist was nearly uniform across Scotland by the end of 2010.

“The SPSP, having the logistics and resources of a national programme, facilitated that process with support from the Royal Colleges and commitment from members of staff,” says Mr Manoj Kumar, a general surgeon in Aberdeen and National Clinical Lead for the Scottish Mortality and Morbidity Review Programme. “Health boards were committed to ensure it was implemented to scale and on time.”

Over the years subsequent to introduction of the checklist, Manoj and other healthcare professionals involved in its implementation could tell it was having a definite effect – and this was the genesis of a major study, the results of which have just been published in the British Journal of Surgery.2

Indeed, the true success of the WHO checklist has over the years been disputed.

An initial pilot study of the checklist was conducted in eight hospitals in eight cities worldwide and yielded impressive results over a wide variety of healthcare settings, socioeconomic circumstances and diverse patient populations. Over a 12-month period, use of the checklist reduced major mobidity by more than a third, with inpatient death rates falling from 1.5 to 0.8 per cent.

But this study had a trial format with data collated prospectively. It begged the question: could this reduction be replicated in a real-world setting? Other studies in various healthcare facilities and regions looking at the influence of the checklist on outcome have yielded mixed results. This led Manoj and colleagues from Ariadne Labs, Boston and Scotland to take a closer look at surgical outcomes in hospitals across Scotland, where implementation of the checklist was mandated through a national collaborative programme to improve patient safety.

A population cohort study was undertaken looking at all admissions to acute hospitals in Scotland between 2000 and 2014. Out of 12.7 million admissions, 6.8 million had a surgical procedure, and among that cohort the mortality rate in the year 2000 was 0.76 compared to 0.46 in 2014. Introduction of the WHO checklist in 2008 was associated with a 36.6 per cent reduction in mortality. This reduction persisted when the data was controlled for urgency of admission, which was the only baseline demographic that altered during the time frame. No such improvement was seen in the non-surgical cohort over the same time frame.

Scotland’s National Clinical Director of Healthcare Quality and Strategy, Professor Jason Leitch, commented: “While there are a number of factors that have contributed to this, it is clear from the research that the introduction of the WHO Surgical Safety Checklist in 2008 has played a key role.

“This decline in mortality has been achieved through the hard work of hundreds of people involved in the project across the NHS in Scotland, delivered under the Scottish Patient Safety Programme alongside a number of other surgical safety measures.”

“Behind every one of these statistics is a life saved, demonstrating the impact that the Scottish Patient Safety Programme has had and continues to have on delivering safe, effective and person-centred healthcare for patients. I am delighted that this work, which has the support of Scotland’s Royal Colleges and surgical societies, has been recognised in this way.”

Equally impressed was Dr Atul Gawande, professor at the Harvard School of Public Health and founder of Ariadne Labs, who led the introduction of the WHO Surgical Safety Checklist a decade ago. A co-author of the BJS article, he commented: “Scotland’s health system is to be congratulated for a multi-year effort that has produced some of the largest population-wide reductions in surgical deaths ever documented.”

The authors of the research acknowledge that the surgical checklist was not a stand-alone intervention, and other parameters may have contributed to the improvement. But the checklist was the only intervention within the SPSP that targeted surgical patients specifically during the interval studied.

So why was its introduction in Scotland so uniquely successful?

“Looking at the process and speaking to colleagues, not just in Scotland but also across the UK and in North America, there is one common denominator – and it’s the team,” says Manoj Kumar.

“Good teams equate to good outcomes. That is my personal experience and that is the evidence we are seeing.”

“One of the key things about the checklist is that it breaks down traditional hierarchical barriers. People are given the time to literally pause and talk to each other. In units where they appreciate the purpose of the checklist – complemented with the right training and the proper support of management – you see better team working, better communication. People are more likely to speak up when they realise something is not right or appropriate – from ODPs to scrub practitioners to surgeons and anaesthetists.”

Manoj has a particular interest in the non-technical aspects of surgical safety having also studied human factors or ergonomics and collaborated with international colleagues from other professions including clinical psychologists, and safety experts from NASA and the oil and gas industry.

“The expectation that a checklist in itself will solve all your problems is a fallacy,” he says. “You can’t just give someone a piece of paper and expect it to work. You need to have a full implementation process. People must actually appreciate that it’s more than just a tick-box exercise.

“Ultimately it boils down to culture change and you can’t change culture overnight. You have to accept that; you have to show value. You have to make the whole process meaningful.”