Insight chats with surgeon and recently retired MDDUS board member Peter McDonald on the recent publication of his insightful and entertaining memoir, A Doctor’s Aim 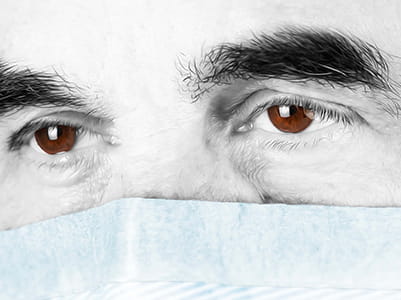 PETER McDonald is a consultant general surgeon at Northwick Park and St. Mark's (NPM) and was an MDDUS non-executive board member until retiring last year after 10 years in that role. He is also a writer and journalist, having recently published his memoir, A Doctor’s Aim. Insight spoke to him from Hertfordshire where he lives with his wife, a retired nurse, along with two dogs and several horses.

Your memoir covers a career of over 45 years in medicine. When did you develop an interest in writing?

I published my first series of investigative articles as a roving reporter for the UCL (University College London) student newspaper after having kept extensive diaries while travelling abroad in Africa before university. My first paid article was in World Medicine in 1975, when I was paid £25. It felt so good that I have never stopped trying to cultivate the habit.

What did you hope to achieve in writing the book?

Mostly I wanted to emphasise just how worthy and varied a career in medicine and dentistry is. Most of the men and women who work with me are very committed to their patients and they should be justly proud of what they do. In a world where medicine, like so much else, is characterised by politicians and managers as just a unit of care to be ticked off on a ledger, my readers need to be reminded that each contact between patient, doctor or nurse, is an important caring event of extraordinary significance.

I illustrate that in A Doctor’s Aim by relating the wonderful career that I have had and enjoy, oddly still full-time at age 71.

How did you go about writing the book? Is it based on journals?

After 50 years as a scribbler, I have a mountain of my old articles to refer to and I pieced some of the book together that way. I have often kept diaries and it was not hard from all that material to weave together a book that would be of interest to the intelligent medical or lay reader.

What other writing have you done?

The majority of my output (apart from about 70 surgically-orientated learned publications) has been as a columnist writing on general surgical and medical issues. In particular, I write about the ethos of what it is to be a doctor. I had a weekly column in Hospital Doctor for 20 years from 1983 to 2003. More recently I’ve had fun penning a satirical column for the last 16 years as ‘Mr Slop’ for The Bulletin of the Royal College of Surgeons London.

My freelance writing has included articles in The Times, She magazine, Readers Digest, Aesthetic Medicine, and even three articles in Horse and Hound. My horse Galway is very much part of the family and features dramatically in the epilogue to A Doctor’s Aim.

In addition, I’ve published a satirical medical novel (Trust in Conflict, 1999), The Oxford Dictionary of Medical Quotations (2003), and a travel book on a long distance journey I made on horseback, called A Ride in Middle England (2005), with an accompanying documentary shown on the slightly obscure Horse and Country TV.

I would have loved to have had a regular column in a non-medical publication but like all freelance writers the word ‘rejection’ is never far from my daily lexicon. Maybe it is never too late to try and I keep sending the occasional article off to The Spectator and elsewhere.

How did you fit writing the book in around your other activities? Do you have a regular writing routine?

As a columnist, writing for deadlines is a lot easier than the self-discipline needed to write a book. However, when writing a substantial work, it is important to set chapter tasks and keep up the momentum.

Writing and editing a four to five thousand word chapter a week is a good but not always achievable aim. In fact, it’s the editing that is actually the much harder task, and much self-criticism and cutting out of useless or irrelevant verbiage must be effected ruthlessly. This book took eight drafts and many hours of editing. As any writer knows, it is easier to write a long sentence than a short one.

The morning is always much more productive for writing than the afternoon – that’s one thing I would say. Some of the more imaginative things might be articulated late in the evening, even over a glass of good Scotch whisky, but they need checking the next day to make sure they are sensible.

In terms of routine, you just need to sit and start – and something almost always comes, which surprises you. That’s the other thing about writing: you suddenly find there is something on the paper which you didn’t know was actually inside you.

What makes you want to write?

That’s a difficult question to answer. Writing is a habit that brings great satisfaction when your words are read and appreciated. It does not, however, bring great wealth unless you uncover a special diamond. But the feedback I have had is often touching. The best epithet given to me was by a retired Australian surgeon when he labelled me “The Admirable Mr. Slop”.

Writing is a solitary, almost antisocial activity. Luckily for me, my writing time is balanced by an incredibly social surgical work life and a wonderful home full of love, children, animals, a farm to maintain and many hobbies.

Most of my writing is in the form of amusing parables that allow me to illustrate important issues of relevance to practising clinicians. I criticise the system where it needs to be held accountable and castigate those in positions of power when they abuse common sense or fair play. It has occasionally got me into trouble, as is related in the book. Once I received a letter threatening legal action from three different professors when I wrote that the worst surgeon I had ever trained alongside was now a professor of surgery. I had obviously tapped into some deep-seated paranoia and, of course, only one of them was right. Luckily nothing came of it in the end and I survived to write for a short time under a ‘nom de plume’.

Are you working on another project?

I am beginning to formulate a novel or screenplay based on the concept of the ‘second victim’ – i.e. a surgeon operates, the patient sustains a mortal complication, the surgeon suffers burnout/post-traumatic stress to the point where he cannot work. It won’t be a barrel of laughs but it may touch some deep nerves. 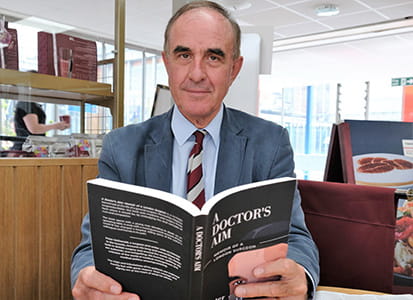 What did you find most rewarding as an MDDUS board member?

The fact that I was given a chance in a formal, albeit indirect, way to support colleagues when they were being threatened with medico-legal proceedings. Being on the board was one of the best professional experiences of my career.

One of the most important contributions I made (in a small way) was to nudge the Board and the Executive to put the pastoral care of the members at the top of their agenda. I think the recent YourHalo initiative is an amazing resource to have been put in place by the MDDUS to support members when they are distressed. Like the AA [Automobile Association], it’s reassuring to know it’s there.

What are the main challenges you see for MDDUS going forward?

To persuade governments that changing the way the laws of tort apply to medical and dental practice is vital to keep costs manageable for doctors, hospitals and the NHS as a whole - this must be the biggest challenge for MDDUS.

A Doctor’s Aim by Peter McDonald is available on Amazon

Taking place on 12 October 2022, this course is designed for any clinician using or planning to use remote consultations within the secondary care environment.

Taking place on Wednesday, 30 November this interactive workshop from our training partners at 'Resilient Practice' is designed for any hospital doctor to attend.