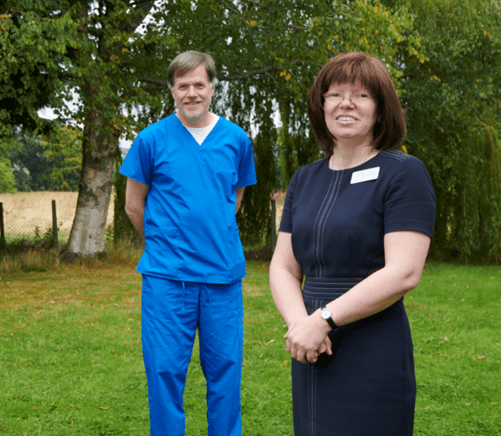 “I PROBABLY had my first sleepless nights a good couple of weeks before my colleagues,” says GP Dr Miles Mack.

It was in early February of 2020 when Dr Mack, in his role as chair of the Academy of Medical Royal Colleges and Faculties in Scotland, travelled to Glasgow to meet with colleagues, including the chief medical officer, when the possible threat posed by the coronavirus was discussed.

"It was unclear then what its impact would be and Scotland was still in the early stages of considering how we would manage things.”

Dr Mack returned to his hometown in Dingwall, near Inverness in the North of Scotland, troubled at the thought of how his own practice would deal with the potential outbreak.

Dingwall Medical Group is a 10 GP practice with about 12,000 patients, based in a local health centre though covering a broad rural district of the Highlands, stretching from the Cromarty Firth west to the village of Achnasheen. He and the practice team had their first serious discussions about pandemic preparedness towards the end of February.

Pauline Ogilvie has been practice business manager at Dingwall since February 2019. “Some of our staff were off on skiing holidays in the Italian Alps,” she says. “So that really did kick-start our early discussions on what we should do for them returning back into the country.”

The team found themselves contemplating the same daunting challenge that practices across the UK faced in providing a general medical service in the midst of a possible lockdown and infection risk for both staff and patients. However, they did have a couple of things working in their favour. Following the 2009 H1N1 swine flu pandemic, the practice had drawn up contingency plans – including an updated plan produced in 2014. This also coincided with building refurbishment at the health centre in Dingwall, both of which proved fortuitous from a COVID-19 standpoint, says Dr Mack.

“With a great deal of foresight, my partner Dr Moira McKenna, who was then leading the refurbishment from the health side of things, built into that the ability to have a separate area to prevent disease contamination. So not only did the practice have a pandemic preparedness plan but also a health centre that had already been designed with a separate waiting area and consulting rooms where we could isolate patients with respiratory symptoms.”

In normal times this community area, which is at one end of the health centre with a separate door to the car park, is used mainly for nursing and social care consultations. Simply by placing a divider at the end of a corridor the practice created a red zone. Here patients previously triaged as having respiratory symptoms would present and then phone the receptionist. A specified red zone doctor – kept socially distanced from other staff – would then assess the patient.

The practice also set up an amber zone for doctors dealing with patients face to face who were deemed to be low risk. Most of the staff worked in a green zone, which was patient-free and mainly administrative. This was also where telephone triage was undertaken.

"We put in the total triage system probably a good week before 23 March when lockdown was announced,” says Dr Mack. “So at that point we had basically shut the practice for walk-in patients.”

“I think initially there was a sort of population shock and fewer face-to-face consultations were booked, but as time progressed and the coronavirus pandemic took hold we started to get a steadily increasing number of phone calls. Having the triage system up quickly helped.”

The practice also instituted morning huddles for admin staff, doctors and the extended clinical team to meet up each day. “This provided an opportunity for us to quickly snag ideas and change procedures literally on a daily basis to make sure we were responding to what was required of us, and to ensure the systems in place were usable,” says Dr Mack.

Huddles also offered a forum for staff to raise real-time concerns over anything from shielding patients to unconsidered infection risks. “The huddles have been a real help for all levels of staff, not just the clinicians,” says Pauline. “Everyone is involved which certainly helps teamwork and makes doctors more accessible for administration staff, which wasn’t always possible pre-COVID.”

One ongoing concern and discussion topic among frontline staff has been adequate PPE provision. Says Dr Mack: “There were a couple of times where we were having to watch stock numbers. But I don’t think we were ever at the critical level. It probably came down to a week’s supply at one point but we are very grateful to NHS Scotland as the system worked pretty well.”

Sometimes the kit is not quite up to local conditions, he adds. “Out on home visits on a blustery Highland day the flimsy aprons can be quite problematic. They tend to blow up into your face.”

COVID-19 has transformed the doctor-patient interface at Dingwall just as it has across the UK. Pauline estimates that before March 2020 around 90 per cent of consultations were face to face and 10 per cent by phone. “I would say that flipped completely after lockdown. Now it’s probably about 60 per cent phone calls and 40 per cent face to face.”

Another major change has been the use of remote consulting. “All of our GP consulting rooms now have new screens with video cameras for Near Me – so we can offer video consultations, which we didn’t have before COVID.” Near Me is the standard video consulting service approved for use by NHS Scotland.

“Patient behaviour has definitely changed,” says Pauline. “They are much more receptive to a telephone call from a doctor now. Before COVID, doctors would tend to phone patients in between face-to-face consultations or during their lunchtime, or after hours. Now we have dedicated time slots for these phone calls, which helps the doctor as well as the patient. Quite often the GP would try a patient numerous times and not reach them. Now nine times out of 10 they are there for the phone call.”

Dr Mack sees the increased use of remote consulting as one innovation that is definitely here to stay, especially in remote and rural medical practice.

KEEPING PATIENTS IN THE LOOP

Patients at Dingwall have been mostly tolerant of the service changes, says Dr Mack. “I think the majority are hugely appreciative of the fact that we remained open and continued to see patients.” Service updates at the practice have been publicised by various means including via the website, text messaging and the main telephone switchboard recording. “We have quite a big following on Facebook which has also helped,” says Pauline.

Recently the practice changed the way it operates again as NHS Scotland eased lockdown and moved into Phase 3. “We now split into urgent and routine teams each day,” says Dr Mack. “We still have a red room but we don’t have a designated doctor to look after that. Any doctor who is on the acute team can use that space to see patients without risk.”

Now that practice has come somewhat more to grips with the immediate situation it faces with COVID-19, routine care has again become a focus. “There is definitely a backlog of some activities,” says Dr Mack. “Things like sexual health, such as fitting coils and contraceptive implants. We’re also well aware that what we do as doctors – the urgent stuff – is only part of it. Where we have the biggest impact on population health is in chronic disease management and managing people’s complex needs.”

Dr Mack worries about those patients who may be sailing under the radar. “There have been a number of patients who have presented late, patients who have sat at home with worsening symptoms and have come to us with cancer diagnoses you would really like to have seen when they first had symptoms. It’s difficult to understand why. There are always some patients who don’t want to bother us, and even less so now when they perceive we’re under strain and pressure. These are the patients that probably concern us the most.”

In general though the practice feels lucky to have so far been spared the worst in regard to COVID-19, says Dr Mack. “Scotland has had far fewer cases than the rest of the UK, and the Highlands have only had about a third of cases compared to the rest of Scotland.”

There was also another unexpected advantage. Some of the local whisky distilleries were able to shift some of their production to hand sanitiser in response to the pandemic.

Says Pauline: “I used to be a distillery manager prior to being a practice manager and I still had some contacts. So we had a plentiful supply of alcohol and wipes.”

Yet another benefit of living in the Highlands.

Jim Killgore is an editor at MDDUS

MENTAL health and behavioural conditions were the most common "known" reasons for fit notes being issued by GPs in England between December 2014 and March 2017, according to new figures from NHS Digital.