No man’s land - the pioneering women of WW1

Author Wendy Moore on the story behind her book celebrating the ground-breaking WWI “suffragettes’ hospital” at Endell Street, London 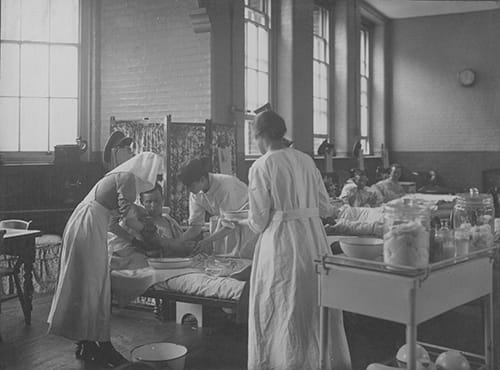 AS soon as the First World War broke out in August 1914, women doctors rushed to volunteer. Within 10 days of war being declared more than 60 female doctors sent their names to the War Office, offering to treat wounded soldiers at home or overseas. But their help was not wanted.

One female surgeon who volunteered was told to “go home and sit still”.

Flora Murray and Louisa Garrett Anderson were not the kind of women to sit still. They were both qualified doctors with more than 10 years’ experience each. Anderson, who was 41 at the start of the war, was a surgeon. She was the daughter of Elizabeth Garrett Anderson, the first woman to qualify in Britain to join the Medical Register. Murray, four years older, was a physician and anaesthetist.

They had both trained at the London School of Medicine for Women (LSMW). But despite the fact their qualifications were identical to those of their male counterparts, they were confined to treating women and children. At the beginning of the 20th century most British medical schools refused to admit women and few mainstream hospitals appointed women doctors. It was taboo for female doctors to treat men.

So Murray and Anderson had had no choice but to work in hospitals treating women and children. Infuriated by this discrimination they had put their careers on the line to campaign as suffragettes. Anderson served four weeks in prison in 1912 for smashing a window in a suffragette protest and Murray campaigned vociferously against the force-feeding – by male doctors - of suffragettes on hunger strike. They were also life partners who wore identical diamond rings and lived together in the manner of a married couple. Flora described Louisa as “my loving comrade”.

Murray and Anderson were just as keen as their male colleagues to serve their country but they also saw war as an opportunity to prove that women doctors were every bit as capable as men. Within two weeks of war being declared they offered their services to the French Red Cross, raised £2,000 for medical supplies and equipment and recruited a team of fellow doctors and nurses to go overseas.

On 15 September they set off with their team of 18 women, plus four male helpers, for France. There they ran a hospital in a hotel in Paris treating wounded British and French soldiers from the frontline 60 miles away.

British Army officers and doctors who visited the Paris hospital were so impressed that when Murray and Anderson opened a second hospital, on the French coast, they were given official army status. Then in early 1915 the two women were invited to a meeting at the War Office in London with Sir Alfred Keogh, head of the Royal Army Medical Corps (RAMC), who asked them to run a major military hospital in the heart of London. They accepted immediately, closed their French units and returned to London.

Endell Street Military Hospital opened in May 1915 in a former workhouse in Covent Garden. It had 520 beds, later increased to 573, in 17 wards, all named after female saints. Endell Street was unique. It was the only hospital within the British Army to be run and staffed by women. Apart from 22 male RAMC orderlies, later reduced to eight, all its 180 staff were female.

Murray was chief physician and medical director while Anderson was chief surgeon. There were 14 medical posts which were occupied through the war by an assortment of 40 women doctors. Most had trained, like Flora and Louisa, at the LSMW but five surgeons came from Australia and one anaesthetist from Canada expressly to work at Endell Street.

Endell Street was on the frontline of London’s wartime medical care. It was one of the 20 largest military hospitals in the capital and within central London it was one of the biggest 10. And due to its proximity to railway stations, where the wounded arrived by ambulance train, it received the most serious cases.

Wounded in mind and body

Throughout the war the women at Endell Street treated 26,000 patients, the vast majority of them men, although they also cared for 2,000 women who joined the services in the latter years of the conflict and were wounded or fell ill. The doctors there performed more than 7,000 major operations, operating eight or nine hours a day, and they pioneered medical advances including an antiseptic ointment called bismuth-iodoform-paraffin paste, or BIPP for short.

Endell Street was also renowned for its homely atmosphere. Anderson believed many of her patients were “more wounded in their minds than in their bodies” and she insisted that the wards were bright and cheerful with fresh flowers and colourful quilts. There was a library boasting 5,000 books and a theatre which staged thousands of entertainments to keep the men occupied. Newspapers hailed the “suffragettes’ hospital”, as it was known, the “most popular” in London and some men, who heard of its fame while in the trenches, actually asked to be sent there.

But it was tiring, gruelling work for the women staff. Murray and Anderson were tough bosses who believed their staff should work harder than men to prove their worth. 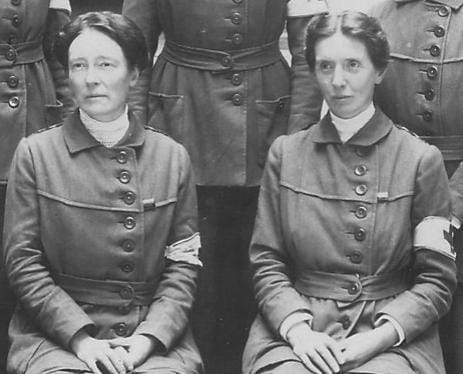 After the war, Endell Street stayed open for a further year to treat the victims of the “Spanish” flu pandemic. Four staff died after catching flu on duty. Finally the hospital closed its doors in December 1919. Murray and Anderson were awarded CBEs for their achievements and their success was regarded as a major reason women were granted the vote. But after the war, women doctors were forced back into exactly the same roles as before – treating only women and children.

Murray and Anderson retired to the country soon after Endell Street closed. Flora died in 1923 and Louisa lived on alone for another 20 years. When Louisa died, in 1943, her name was added to Flora’s gravestone with an inscription: “We have been gloriously happy.”

I wrote my book to pay tribute to their pioneering work and to celebrate all the women who worked at Endell Street.

Wendy Moore is a journalist and author in London. Her book Endell Street: The Women Who Ran Britain’s Trailblazing Military Hospital is published by Atlantic Books