A night to forget

...Ms D is accused of racist abuse and her GDC registration is put on hold...

Ms D, a final year dental student, is out with friends for drinks in a busy city centre. Just before 11.30pm Ms D and two friends leave to catch the last train home. One of the friends cannot find her ticket and the station guard refuses to let her through the turnstile. An argument breaks out attracting the attention of two police officers. The station guard then accuses the three women of intimidation and racist abuse. All three are arrested and charged.

Ms D is on course to graduate and has secured a place on a vocational dental practitioner scheme starting in the summer. She has applied to register with the General Dental Council and, as required, declared that she is subject to criminal proceedings. She receives a letter from the GDC to say that her application for registration is on hold pending further information on the outcome of her criminal trial, but the trial is scheduled for two months after Ms D’s VDP start date. Ms D replies to the GDC stating that she has pleaded “Not guilty” to the charges and denies making racist remarks. She was only trying to calm down her friend who was angry and inebriated.

The GDC replies with a letter recommending that Ms D withdraw her application until after the criminal proceedings against her have been concluded. It advises her to obtain legal and/or professional advice before replying to the letter. Ms D is very upset and contacts MDDUS. She meets with a dental adviser and a lawyer to discuss the case and formulate a plan.

An MDDUS lawyer replies to the GDC on Ms D’s behalf, arguing that the decision not to register her is disproportionate. The letter makes the point that the charges at this stage are only alleged and that had the incident occurred when Ms D was already a registrant it would be highly unlikely that she would have been removed from the register even after an appropriate GDC investigation of the facts. Enclosed with the letter is proof of the offer to Ms D of vocational training conditional on her registration with the GDC. In addition are eight character references including one from the head of the dental school and another from a VDP trainer.

The GDC responds to the letter refusing to approve Ms D’s application on the grounds that she has failed to fulfil the “requirement of good character necessary for registration at this time”. MDDUS immediately appeals this decision.

A HEARING is held three months later before a registration appeal committee. The committee considers oral and documentary evidence, including reflective learning logs and CPD undertaken by Ms D since the registrar’s decision. One of Ms D’s professors attends to testify to her character and excellent academic and clinical ability.

A barrister instructed by MDDUS to represent Ms D submits that the registrar has given insufficient reasons for the decision and failed to take due regard of the fact that Ms D has only been charged with an offence and has denied it from the outset. The criminal allegations remain unproven and are not material in assessing the issue of good character. Guidance from both the Professional Standards Authority and the GDC on the impact of criminal convictions do not refer to unproven allegations.

Ms D’s barrister contends that the decision not to register her has had a punitive effect, resulting in the loss of her vocational training place, which was difficult to obtain given the very limited number of placements available. This has prevented her from practising dentistry and presents the risk of Ms D becoming deskilled.

Ms D is subsequently entered onto the GDC register – and she takes up her vocational training six months later.

• Contact MDDUS immediately before making any representation to the GDC in regard to criminal charges or a potential complaint.

• Be aware that the GDC holds dentists to a higher standard of behaviour than is expected of the general public. 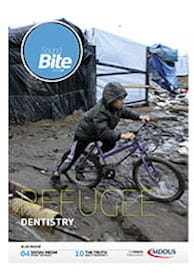