A 53-year-old man – Mr T – attends his dental surgery for an emergency appointment with swelling in his upper jaw and two loose teeth. The dentist he had been consulting on numerous occasions for the last eight years – Mr L – has moved on to another practice so he instead sees Mr G, the senior partner. Mr G examines the patient and takes a series of radiographs. These reveal that Mr T has suffered considerable periodontal bone loss associated with 14 teeth. He discusses his findings with the patient, who asks why Mr L had not drawn attention to the problem. Mr G can offer no explanation.

Mr T re-attends the surgery with significant pain in LR7 and LR8 which are both significantly mobile. Mr G judges that both teeth are no longer viable and the patient opts for extraction. The dentist advises that his gum disease is now so advanced it may not be possible to save some – or most – of the affected teeth.

Solicitors representing Mr T write to the practice alleging clinical negligence over the patient’s treatment by Mr L. The letter also includes a request for copies of the patient notes accompanied by a signed consent form from the patient. Mr G forwards the letter to Mr L at his new place of employment and advises him to contact the solicitors directly. Mr L phones MDDUS and a dental adviser asks him to forward copies of the letter and Mr T’s full dental records. A report is commissioned by a dental expert who examines the case papers.

THE expert considers the patient’s treatment over the eight-year period under Mr L’s care. Bitewing radiographs taken on Mr T’s first consultation with Mr L show most of the molar teeth have been filled and three had been root treated. There were a number of existing caries needing treatment but periodontal bone levels of the molar teeth were satisfactory at the time. No evidence of the state of anterior teeth at that time is recorded.

In subsequent years Mr T attended for numerous examinations and treatment including fillings and regular scaling and polishing. A radiograph taken three years ago shows periodontal bone loss associated with UR6 and UR7 but there is nothing in the records to show any action was taken based on that information.

Examination of the patient by the expert reveals periodontal pocket depths of greater than 5mm in 12 teeth with seven teeth at mobility grade I or II. Based on this examination and available radiographs, the expert offers a poor prognosis for several of Mr T’s teeth with extraction necessary within 10 years. He believes that immediate extraction of some teeth would facilitate a more effective restoration plan.

The expert recommends a remedial treatment plan involving a periodontal specialist to remove any sub-gingival deposits from the root surfaces and then a number of extractions followed by implant retained crowns and bridges – providing there is adequate alveolar bone available for the placement of fixtures. A cost estimate is also provided.

The MDDUS adviser consults with legal colleagues over the case notes and the expert report. The lack of any reference to periodontal assessment of the patient over the period of his treatment by Mr L is considered legally indefensible. In consultation with the member it is decided that the case is best settled out of court with the amount based on estimated treatment costs for restoration as set out in the expert report.

• Avoid the charge of “supervised neglect” by using every appointment as an opportunity to assess the overall oral health.

• Keep adequate notes of home care advice given to patients and the importance of flossing, brushing and smoking cessation to avoid gum disease. 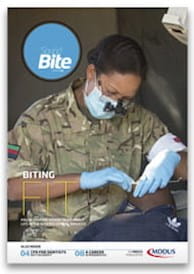