Expensive payouts for major medical negligence claims are still rare in the UK – fortunately. So what characterises the large claim?

EACH year thousands of medical negligence claims are made by patients in the UK against hospitals, health boards, trusts and individual doctors and dentists. Most cases are abandoned by claimants or settled for relatively modest amounts (under £10,000). But some will exceed £500,000 with a few rising into the millions. Fortunately such massive payouts are rare. Otherwise the costs would be crippling both to the NHS and medical defence organisations who represent individual doctors and dentists.

Keeping abreast of the potential risk posed by large claims is of prime importance to the MDDUS. The Union employs actuaries to estimate future settlement and legal costs to ensure the Union has more than sufficient funds to cover such claims – both known and not yet intimated – on behalf of our members. It is equally important for MDDUS to consider what are the common characteristics of large claims and encourage proactive risk management – as far as is possible.

Among the main factors that drive up the cost of claims as a result of medical mishaps or errors are potential lost future earnings and the costs of ongoing care to patients.

In 1996, a world-class Latin dancer named Kerstin Parkin was looking forward to a lucrative career as a teacher and choreographer alongside her husband and former dance partner. But in November of that year she suffered a heart attack after having a fit during the birth of her first child at Farnborough Hospital in Kent. The incident left her severely brain damaged and confined to a wheelchair.

In the resulting court case, Parkin’s QC alleged that the incident arose from “profoundly substandard care”. Hospital staff failed in providing “basic first aid” and a cardiac team was unable to reach the patient because they did not know the security code to enter the ward.

The 38-year-old received £12.4 million in compensation, the largest single payment made yet by the NHS in England. The payment reflected the cost of longterm care but also the lost earnings Parkin could have expected in the course of a normal career. This factor also contributed to the recent £5 million settlement to The Bill actress Leslie Ash, who contracted MSSA after being treated for fractured ribs at the Chelsea and Westminster Hospital in 2004. Ash suffered paralysis as a result and now walks with a cane. Most of the value of the award was based on past and future loss of earnings as an actress.

More common to large claims are costs to support life-long care in severely disabled patients. One recent example was resolved in March of this year when ten-year-old Jordan Giles was awarded £5.25 million in an out-of-court settlement for cerebral palsy attributed to medical negligence during his birth at Vale of Leven Hospital in Dunbartonshire. It was Scotland’s largest compensation payout to date.

The funds will be used to help provide full-time support and also to buy special equipment and adapt a new house for Jordan. The rest is to be kept in trust for the boy with court officials monitoring how the funds are to be spent.

Cases involving birth trauma are common among very large claims. At MDDUS, complications in pregnancy and labour constitute the highest percentage of estimated large claims (> £500,000) currently ‘active’ (see Common Large Claims below). Courts justify high payments in such cases because surviving children can be left profoundly disabled and yet often with near-normal life expectancies. The cost of specialist care and support for these children long-term can be overwhelming for families. Damages of over £5 million are not uncommon and the NHS Litigation Authority (NHSLA) in England and Wales estimates such cases account for 60 per cent of all its claims.

Courts in the UK tend to be pragmatic in awarding compensation to claimants and this is also reflected in negotiated settlements. A recent case from MDDUS files involved a delayed diagnosis of meningococcal septicaemia. A GP failed to refer a 15-year-old with severe flu-like symptoms to hospital despite being told that the patient had previous contact with a schoolmate suffering from meningitis. The teenager suffered complications and had to undergo bilateral below-knee amputations in both legs and later partial amputation of both thumbs and some fingers.

MDDUS lawyers and experts deemed the case indefensible and negotiated a substantial settlement on behalf of the member taking into account both “total past loss” to the patient’s family and the cost of future care. The agreed ‘Schedule of Loss’ included various costs from lost earnings to the parents to modifications to the family home such as a chair lift and a downstairs shower. Future costs took account of potential ongoing needs such as prosthetics, special accommodation, wheel chairs and adapted automobiles.

Legal costs and other burdens

Major medical negligence claims can also involve considerable time and resources to investigate and resolve, either by negotiated settlement or in court. Legal costs can be considerable and will include those to the defendant as well as ‘adverse costs’, or those associated with the claimant’s legal team. In order to reduce our own legal costs and provide better value to our members, MDDUS now employs a team of in-house lawyers based both in England and Scotland, rather than relying solely on independent legal firms.

Surprisingly, over the last few years the number of all medical negligence claims at MDDUS has fallen. However, this has been matched by an overall rise in costs. Law firms specialising in ‘no win, no fee’ claims attract disgruntled patients and demand a ‘success fee’ for large claims often double the normal scale. This means that lawyers acting for patients have an incentive for pursuing only the most potentially lucrative claims.

Another factor that promises to add to the burden on organisations such as MDDUS in dealing with large claims is a possible shift to periodical payments in England and Wales. Traditionally, a successful claimant quantifies their level of damages and the defendant makes a single payment and the case is closed. But lawmakers have decided that this places an unfair burden on claimants in having to estimate future losses and cope with unforeseen economic changes, e.g. high inflation. Any deterioration in the value of their compensation is borne by the claimant.

So from April 2005, amended sections of the Damages Act 1996 introduced the notion of periodical payments. Under the amended law, courts now have the power to make an order directing the compensator to make payment of part of the award in an ongoing series of future or periodical payments. This shifts the burden of future uncertainty to the defendant.

In many ways, cases that result in large claims differ from other medical mishaps only in the consequences. MDDUS can advise doctors in risky circumstances – obstetrics wards, GPs called out to patients ostensibly with flu – to take special care and ensure systems and procedures are in place to reduce risk. But we acknowledge that mistakes will be made and it is our job as a medical defence union to ensure our members are protected should the unthinkable happen. 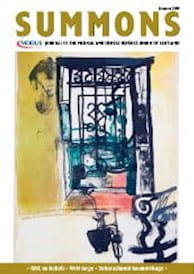