The rising cost of claims is a concern to all those involved in medical defence work, and in this issue, risk adviser Cherryl Adams reports on the types of claims that tend to be most costly

A QUICK look at MDDUS files reveals that there are hundreds of active cases being managed by our advisory and legal teams at any one time. The causes vary widely and the estimated costs of resolving each one can range from as little as £100 to more than £5,000,000.

While so-called “high value claims” are mercifully rare, they can have an enormous impact on the lives of all involved.

Failure to diagnose a condition or refer for investigation of symptoms are the most common causes of negligence claims, with over two-thirds of MDDUS cases falling into these categories. Further analysis demonstrates that high-value claims often share causal similarities to lower value ones. The systemic or human factor issues which contribute to the alleged failures in these cases can be the same – it is in the outcome and impact on the patient that they differ. For example, failure to refer someone for investigation of symptoms which ultimately are diagnosed as chronic migraine has a very different outcome to a missed brain tumour.

Missed or delayed diagnosis, resulting in late treatment and subsequent lifechanging sequelae, are a particular feature of this group of claims. More than a third (38 per cent) of our current high-value claims feature conditions which have resulted in brain injury (e.g. meningitis, hydrocephalus, stroke and tumour), while 29 per cent feature conditions resulting in spinal injury (e.g. cauda equina syndrome, tumour and undiagnosed fracture). Cauda equina syndrome appears relatively frequently within spinal injury claims, making up 12 per cent of our current total of high-value claims. Similarly, delayed diagnosis of cancers of any type sits at around 11 per cent of the total.

Particular themes have emerged from our analysis of high-value claims and it is useful to note common failings include inadequate examination and/or consideration of symptoms, poor communication, failure to recognise or act upon red flags, and lack of adherence to available guidelines. Systemic factors also feature and include issues such as poor record keeping and failures in the results handling process.

Meningitis is often a difficult condition to diagnose in the early stages, with symptoms often resembling common viral illnesses like flu. Of our cases involving patients with meningitis and meningococcal disease, almost 60 per cent involve contacts made with clinicians in the out-of-hours setting and more than 70 per cent feature children under three years old.

A typical scenario involves a parent or carer seeking advice via telephone consultation and the clinician then failing to pick up on reported red flag symptoms. A repeated factor in cases involving young children is the clinician attributing symptoms to seasonal viral illnesses (something that’s “going round”), even when the presenting symptoms do not quite fit the picture of that seasonal illness. This advice can provide false reassurance to patients and carers, who may potentially delay seeking further advice even when the illness appears to progress or change.

Particular features in these cases include multiple consultations with increasing and changing symptoms, despite analgesic therapy and/or physiotherapy. Again, lack of recognition or appreciation of red flag symptoms contribute to the adverse incident. In a number of these cases, even where the patient indicates symptoms of saddle anaesthesia – a clear red flag – the clinician does not act upon this information. Other common features include inadequate safety netting and a failure to communicate the need to seek urgent emergency treatment should symptoms worsen.

The main factor that distinguishes a high-value claim from one of lower value is the severity of injury sustained and the life-changing consequences for the patient. But closer analysis reveals a number of factors common to both types of claim that provide valuable learning points. In terms of systems, MDDUS has found that comprehensive record keeping together with effective results handling and prescribing systems are key to minimising clinical risk. On an individual level, it is invaluable to ensure skills and knowledge are up-to-date, to use effective two-way communication (in particular listening skills), and to widen the scope of diagnosis in the presence of indicators that support doing so.

Cherryl Adams is a risk adviser at MDDUS 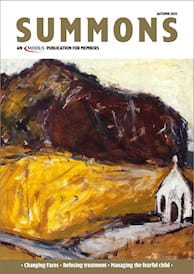 Health literacy on the information superhighway