Dragon at the gate

Can the ‘dragon behind the desk myth’ be slayed?

LAST August the Daily Mail ran an article with the headline ‘Grumpy receptionists and problems making an appointment fuel surge in patients’ complaints about GPs’. It reported on statistics released by the NHS Information Centre that complaints against GP surgeries had increased by almost 10 per cent in a year – “not least because of a surge in grievances over ‘surly’ receptionists”.

Just how significant a “surge” was not addressed but then facts rarely stand in the way of a good headline.

Medical and dental receptionists make easy targets. They do not have the professional mantle of doctors or dentists or practice nurses; there is no Royal College of Receptionists. Yet their role in healthcare provision is both important and at times fraught with complexity according to research published recently in the British Journal of General Practice.

“The historical perception of the receptionist as a ‘dragon behind the desk’ has been getting in the way of understanding the role of receptionists and thus improving patient care,” write the authors, among them lead researcher Jonathan Hammond of the Institute of Population Health at Manchester. He adds that their research addressed the perception “that receptionists are imposing rules on their own whim and with disregard to the amount of power they have over patients.”

“What we were really trying to unpack was this idea of the receptionist as lacking empathy or being undertrained or just being difficult for the sake of it. From our observations this represented only a very surface level of engagement. To get underneath that you have to look at the systems and policies and dynamics of a practice in order to understand why receptionists behave the way they do in particular situations.”

In the study the researchers observed 45 GP receptionists at seven different practices in over 200 hours of interaction with patients and practice staff. The researchers spent most of this time in the reception desk area making handwritten notes.

“We tried not to get in the way first and foremost,” says Hammond. “But we also took the opportunity to talk to receptionists as they were doing their work; asking when we were unsure about things.”

Their observations confirmed the important role receptionists play in general practice, acting as a primary contact point for patients and “shaping patient access to health professionals” in the allocation of appointments and other tasks. This frequently involves making decisions about patient need and determining the level of urgency in order to prioritise care – a role in which they often have “minimal time, information, or training”.

One area involving keen negotiation skills and a certain forthrightness was in dealing with patients who were regarded as trying to ‘play’ the system. A receptionist interviewed in the study spoke of her frustration in dealing with chronic DNAs.

This was often coupled with a desire to protect less demanding but sometimes more vulnerable patients – to act as “advocates”. Some receptionists would go to great lengths to help certain patients navigate the system, ensuring they obtained urgent appointments even if they had not been requested directly.

This concern often extended to a sense of clinical responsibility. One receptionist commented: “At the end of the day, I don’t want someone leaving the practice without diabetic medication and have that be on my head. Or if it’s an asthma attack or something …”.

One common response among practices to any perceived problems with reception staff is to provide additional training. But the authors of the study suggest this may only be preparing receptionists “for what is supposed to happen, rather than what actually happens in an unpredictable and potentially chaotic series of encounters”.

Hammond explains: “Training is important but it’s not the be all and end all. You should also look at the practice more broadly and reflect on what opportunities there might be to make everybody’s work flow a bit more smoothly.”

He suggests that practices should foster an environment in which receptionists feel able to provide input into policies and procedures that affect them and to contribute to improved practice systems. The study found that the most harmonious surgeries were those with plenty of interaction between receptionists and GPs or other staff with a free exchange of opinion.

“Time and again we saw practice policies that were very straightforward on paper but never worked in specific situations,” says Hammond. “They didn’t make sense a lot of the time and receptionists were well aware of this but there wasn’t an avenue for feeding that back and making changes.”

He adds: “I think practice managers are in a very good position to link the experiences of reception staff to broader practice systems.”

And this may help to slay the dragon myth once and for all. 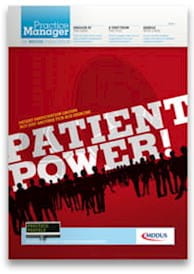