ONLY one medical graduate can claim the honour of being named Poet Laureate of the United Kingdom – and that was Robert Bridges. 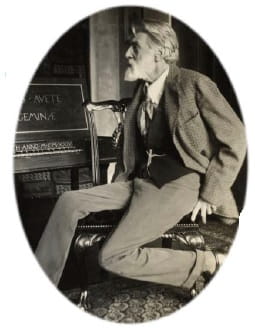 Bridges was born on October 23rd in Walmer, Kent, the penultimate child in a large and prosperous family. His mother was from Yorkshire. When Robert was only nine his father died and his mother remarried the Reverend Dr John Molesworth, vicar of Rochdale, Lancashire. Immediately he was sent to Eton where he received a privileged education. He enjoyed rowing and cricket at school, but it was his aesthetic sensibility and interest in language that attracted him to poetry. He continued his education at Corpus Christi College, Oxford. There he read the Greats and became friends with the poet Gerard Manley Hopkins.

Bridges almost chose the church for a career but decided that medicine was his vocation. In 1869 he was admitted as a student at St Bartholomew’s Hospital in the city of London, graduating in 1874. Victorian London was smoky and overpopulated, and by 1876 Bridges was a physician at Barts and faced with the impossible task of regularly sifting more than a hundred patients in a morning clinic of the Casualty Department. Dr G C Cook (Wellcome Library for the History and Understanding of Medicine) vividly describes the chaos:

“Bridges considered that it was totally impossible to combine the diagnosis of this large number of patients, with efficiency. The prevailing system was in fact virtually inoperable! People were also ignoring good country doctors (GPs) and, instead, making pilgrimages to St Bartholomew’s. A further criticism was directed to extraneous noise, which precluded adequate auscultatory diagnosis.”

Patients were often sent away with a bottle of iron tonic. Rheumatic fever was common and could be accompanied by excruciating joint pain. Bridges published a paper in the St Bartholomew’s Hospital Reports on the use of splints on a patient “who seemed to be dying of sheer pain”. Morphine was also used. He was critical of doctors who did not treat the pain but merely watched the effects on the heart.

In 1876 he moved to The Great Northern Hospital, in the Caledonian Road. This was a charity hospital devoted to the care of the sick poor of the district. That same year he acted promptly and effectively to control an outbreak of smallpox; some patients were evacuated to Homerton hospital and the remainder were vaccinated. Two years later he became a physician at the Hospital for Sick Children, Great Ormond Street. His poem “On a Dead Child” combines tenderness, faith and clinical observation.

Bridges fell ill with pneumonia and empyema in 1881. His recovery was helped by a tour of Italy but he decided it was time to retire from medicine and write poetry in the fresh air of the country. His mother joined him at the Manor of Yattendon, Berkshire. There he co-produced the Yattendon Hymnal. He married Monica Waterhouse, the daughter of an architect, in September 1884. They had a son and two daughters. He named his son Edward after a brother who had died when he was a student. In the early years of the 20th century the Bridges family moved to Oxford.

His first volumes of poems were published privately, but he was recognised by Smith and Elder as a poet of note and when the Oxford Press published an edition of Poetical Works in 1912 he became famous. He was appointed Poet Laureate to King George V the following year. He was a founding member of the Society for Pure English. It aimed to guide education authorities and influence popular taste.

At the outbreak of war Bridges sent a poem to The Times, it was printed September 24th 1914 in the TLS. “Hell and Hate” was inspired by a painting in his bedroom. Personal suffering when Edward was wounded strengthened Robert Bridges’ patriotism and focused it on an anthology of prose and poetry for war time, The Spirit of Man. The first line of one of his best known poems “I love all beauteous things, I seek and adore them” is a theme throughout his work. “London Snow” shows a contrast to the noisy clamour he knew:

When men were all asleep the snow came flying,

In large white flakes falling on the city brown,

Hushing the latest traffic of the drowsy town;

Shortly before his death he completed a long philosophical poem “The Testament of Beauty” which was reprinted again and again in its first year.

Among many honours, it was FRCP given in 1900 that was dearest to him. 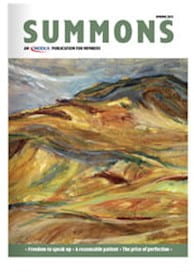