...Mr J alleges that the surgeon failed to appreciate the nature of her symptoms and initiate a colonoscopy or contrast imaging in an appropriate timeframe...

A 66-year-old woman – Mrs U – attends her GP complaining of abdominal cramps and constipation. Examination reveals nothing abnormal, and the GP prescribes a laxative and advises Mrs U to return if no better.

Three weeks later Mrs U returns to the GP with ongoing constipation and altered bowel habit. She reports that the laxative has provided some relief but the abdominal cramps persist. The GP makes a private referral to a local hospital.

A week later Mrs U attends an appointment with a colorectal surgeon, Mr J. She repeats her history of constipation, more recently with some minor bleeding particularly on straining.

Mr J carries out an examination and orders bloods tests to investigate further. He reassures Mrs U that he does not believe the symptoms are serious and informs her that a colonoscopy could be arranged on request. Mrs U declines and leaves the consultation “feeling reassured” and relieved at being spared the “ordeal” of a colonoscopy.

Over the few next months Mrs U’s condition does not improve, with frequent constipation (relieved somewhat by laxatives) and sometimes passage of bloody mucus. She returns to her GP who refers her again to Mr J.

Mr J organises a non-urgent colonoscopy and again offers reassurance that it is unlikely to be anything serious. The procedure and a subsequent biopsy reveal a diagnosis of colorectal cancer. A CT scan indicates that the cancer has not spread (staged T2) and surgery is scheduled.

Mr J undertakes an anterior resection and ileostomy, and the procedure is reversed three months later. Mrs U’s prognosis is considered moderate (around 70 to 90 per cent five-year survival).

A solicitor’s letter is received by the hospital and Mr J, claiming damages for clinical negligence. It is alleged that the surgeon failed to appreciate the nature of Mrs U’s symptoms and initiate a colonoscopy or contrast imaging in an appropriate timeframe.

It is further alleged that this led to a delay in diagnosis and treatment of nearly eight months, in which time the prognosis worsened.

MDDUS instructs external solicitors to advise on the case, taking account of Mr J’s comments. Mr J acknowledges in retrospect that he should have been more insistent in advising Mrs U to undergo a colonoscopy – which would have led to an earlier diagnosis.

Solicitors advise that the case presents a clear risk at court both in terms of breach of duty of care and causation (consequences of that breach). A modest settlement without liability is negotiated with the agreement of Mr J. 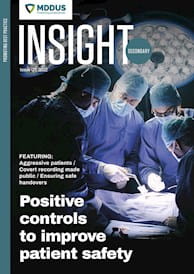