A SIGNIFICANT proportion of MDDUS advice calls relate to the death of a patient. This may be subject to further investigations or formal legal processes, such as a coroner’s inquest or fatal accident inquiry (FAI), and it is common for doctors to be asked to contribute. Such processes can be a source of concern, especially when a doctor’s involvement with the patient may be subject to scrutiny or criticism.

In our first article of this two-part series, we provided an overview of these processes and looked at how to prepare and write a report for an investigation into a patient’s death. In this second part we provide advice on what to do if you are called to provide evidence at an inquest/FAI.

A coroner is an independent judicial officer who investigates deaths. Where necessary, the coroner can hold a public fact-finding hearing in court, known as an inquest.

The coroner can designate any witness as an interested person (IP), a specific legal status which gives rights including the right to legal representation at the hearing, to ask questions of other witnesses and to obtain disclosure of documents. Essentially, an IP will play a more active role in the inquest proceedings, as opposed to a factual witness. The coroner may grant IP status to an individual or organisation because of a concern that an act or omission by that individual/organisation may have contributed to the death. If you are called to give evidence as an IP, contact MDDUS as soon as possible for advice and support.

Following investigation of a death, an FAI may be arranged and presided over by a sheriff. Generally, FAIs are more involved than inquests and less frequent in a medical context. If you are called to attend a FAI, you should contact MDDUS for advice.

Neither the coroner nor sheriff can blame individuals, or determine civil or criminal liability for a death, but they can be critical of individuals involved and standards of care. Being criticised by a coroner or sheriff would necessitate self-referral to the General Medical Council (GMC).

Being called to attend

Preparing for an inquest or FAI

Conclusion of a hearing

Annabelle MacGregor is a medical adviser at MDDUS, Gordon McDavid and Myooran Nathan are medico-legal advisers at MDDUS 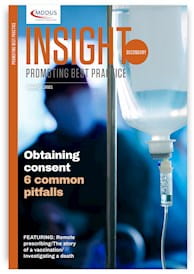