Being realistic for patients

Dr Catherine Calderwood talks to Summons about her ambitious plans for a common sense, patient-focused approach to healthcare 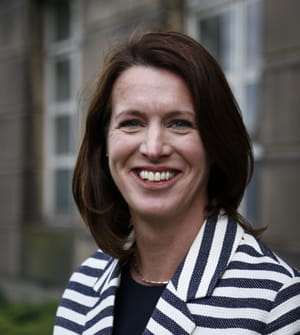 SCOTLAND’S Chief Medical Officer Dr Catherine Calderwood has only been in post for a year but is already causing something of a stir in the medical profession. Her first report, Realistic Medicine, has been widely praised, with enthusiastic discussions on social media site Twitter as well as at conferences and events across the country.

Catherine, who qualified from Cambridge and Glasgow universities, is an obstetrician and gynaecologist and continues to practise at a maternal medicine antenatal clinic at the Royal Infirmary of Edinburgh. She became a medical adviser to the Scottish Government in 2010 and has played a key role in reducing stillbirths and neonatal deaths in Scotland. She chairs a number of key committees, including the UK Maternal, Newborn and Infant Clinical Outcome Review Programme. She was the obstetrician on the panel of the Morecambe Bay Inquiry into maternity and neonatal services and is a member of the recently formed Review of Maternity and Neonatal Services in England.

In Realistic Medicine you said you wanted to start a conversation with doctors about changing healthcare. What has the response been so far?

It seems to have been universally positively received. We’ve received hundreds of emails and online survey responses, and it is getting 60 to 100 mentions a week on Twitter. It’s been amazing. It seems to have really hit a chord with people, that they have thought it was speaking sense. It has been reassuring to find that there is such an appetite to change the way we practise medicine, with the two most common themes being shared decision making and personalised care.

Your report raises the issue of overtreatment and notes that doctors “generally choose less treatment for themselves than they provide for patients”. Why is that?

There’s a lot of research, mostly involving doctors at the end of life who have a terminal diagnosis. Figures show, for example, that 88 per cent of doctors wouldn’t have haemodialysis, 95 per cent wouldn’t have CPR, and 67 per cent wouldn’t agree to be admitted to intensive care. Having discussed this with doctors with expertise in this area, I think it is because we have seen the downsides of some of these treatments and know the reality of being hospitalised or admitted to intensive care. There’s also evidence that doctors don’t fully understand what patients want. Research has shown that doctors assume patients will prioritise living longer over anything else but, when asked, patients say they want two things: to be symptom-free and to spend time with their families.

If doctors have a full, properly documented discussion with patients and their family about the available options, and then decide not to offer treatment with the patient’s consent, that doesn’t generate complaints, that generates thank you cards.

What are the factors involved in overtreatment and how do you think we can reduce it?

Doctors are fixers by definition, that’s the nature of the job. It is also an individualised issue because some patients will want everything done no matter what the discussion is. Part of the reason for writing Realistic Medicine came from hearing clinicians tell me they wouldn’t undertake their own treatment. A respiratory physician specialising in lung cancer told me that, given that diagnosis, he wouldn’t have chemotherapy because he has seen the side-effects. Perhaps we should be more open and transparent with patients about the real impact of some of these treatments? That is one of the questions I am asking in my report.

Will doctors who (rightly) choose to “do nothing” simply end up facing more patient complaints?

There’s definitely a perception that doctors could open themselves up to criticism for not giving enough treatment. But I’m hearing from health boards examples of complaints where a patient has had too much intervention, where the family have written afterwards to say they died in a way that is not what they would have wanted. So perhaps doctors are worried when they shouldn’t be? It all comes back to shared decision making and personalised care. If doctors have a full, properly documented discussion with patients and their family about the available options, and then decide not to offer treatment with the patient’s consent, that doesn’t generate complaints, that generates thank you cards.

How can we move away from the “doctor knows best” culture to one of shared decision making?

People who come into the health service now are generally much better informed. Often they have googled their symptoms beforehand and may have reached their own conclusions, sometimes wrongly. I would welcome that change. The doctor can then have a genuine conversation with the patient about that information, how it does or doesn’t apply to them, and fully discuss all the available options based on the level of knowledge that person has. Of course, some people have poor health literacy. A recent research figure I heard was that 49 per cent of UK working age adults do not understand the information in the bowel screening pack. This is something doctors must be aware of when explaining things, for example by avoiding jargon and double checking the patient has understood what has been discussed.

How do you foresee the process of informed consent changing?

What I’m interested in is the way discussions around consent are framed, because clearly it is a legal process and that raises some difficulties. But it’s about patients knowing that it is their choice as to whether or not they go ahead with treatment. A surgical trainee approached me recently on the train and said he had read my report and had already changed the way he talks to patients when consenting for an operation. He now explains that they have the option not to go ahead with the surgery, that they don’t have to do anything at all. Just because we’ve got the intervention or treatment, doesn’t necessarily mean everything is right for every person.

Are the changes proposed in Realistic Medicine achievable?

I hope so. I've been talking to doctors across Scotland and what they’re saying is that this is the right way to go. They do not need to be persuaded, and are asking “what can we do to help achieve it?” The conversations I’m now starting to have focus on implementation. There’s a lot of momentum behind the report; a lot of people are talking about it as an acceptable way to practice. So I think in Scotland, as a smaller country, perhaps it is more achievable here than it would be elsewhere. It’s about educating trainees to practise medicine like this, and also to make changes at a more senior level to ensure a supportive environment for those trainees as they progress in their careers. The important thing is for everybody – not just doctors – to buy into this concept and to help make the changes a reality.