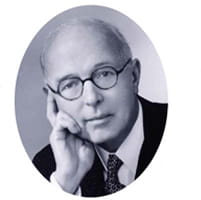 IN THE autumn of 1934 at the American College of Surgeons meeting in Boston, Daphne Muir was the guest of honour. She was an English novelist who had been involved in a car accident nine years earlier that had left her blind. Both her corneas had been damaged in the accident rendering them opaque. Now, as a result of pioneering surgery, her sight had been restored. She had just become the first recipient of bilateral corneal grafts in London and had been invited to the American conference to share her experiences. The man responsible for her recovery was characteristically absent from the meeting, for he was a modest though brilliant surgeon – Tudor Thomas.

James William Tudor Thomas was born into a Welsh-speaking family in Ystradgynlais, Breconshire, but would spend much of his life in Cardiff and London and would be known throughout his career as, simply, Tudor Thomas. A distinguished student, he obtained his BSc in 1913 from the University of Wales before going on to study clinical medicine at the Middlesex in London. In 1916, he not only passed the London MB BS, but he also became the first person to obtain the MB BCh degrees from the University of Wales.

After his house jobs in Swansea, he served during World War I in the RAMC. During his service in Africa he encountered a number of young soldiers who had been blinded in action. It was perhaps this experience that led to his choice of specialty for when he returned to civilian life he trained as an ophthalmic surgeon at Moorfields and the Central London Ophthalmic Hospital before moving back to Wales. He would devote the rest of his career to research and clinical practice in this area.

Throughout the 1920s in Wales, while working at Cardiff Royal Infirmary, he performed a series of experiments on corneal grafting in rabbits, and in 1930 he presented his experimental findings in London. The same year he performed his first corneal graft in man. Thomas was not the first to perform such a graft – that had been done in 1905 by the Austrian ophthalmologist Eduard Zirm – but he made significant contributions to improve the practice of keratoplasty, including developing novel suturing techniques and the improved preparation of the donor and recipient cornea. Indeed, the Medical Research Council, who were funding his work, noted in their annual report of 1931: “the experiments give hope of a radical cure by surgical means of blindness due to the opacity of the cornea”.

His clinical work was performed partly in Cardiff, but also partly in London and it was there that he performed the series of corneal grafts in the early 1930s that brought him the attention of his peers from around the world. However, despite his interests in the scientific basis and surgical practice of keratoplasty, Thomas was also acutely aware of the broader issues of transplant surgery.

As with all human transplantation, the availability of suitable donor material was a serious obstacle in the field of corneal grafting. Before World War II, when he was working at the Central London Ophthalmic Hospital in charge of its corneoplastic department, Thomas developed the idea of a registration system for the collection and use of donor corneas. This concept would develop in the 1950s into the UK’s first Eye Bank at the Queen Victoria Hospital, East Grinstead.

His  pioneering work in the field of corneal grafting brought him many honours. He was elected to the Presidency of the British Medical Association in 1953, he received an honorary doctorate from the University of Glasgow in 1954 and he was knighted in 1956. In 1960, he received the prestigious Gold Medal of the Worshipful Society of Apothecaries in recognition of his contributions to corneoplastic surgery. With this award he joined a very distinguished company as previous recipients of the Gold Medal had been Sir Henry Dale, the pharmacologist and 1936 Nobel Laureate, Sir Alexander Fleming, the discoverer of penicillin and Sir Russell Brock, one of the pioneers of modern open-heart surgery.

But it was not the honours or awards that mattered – his lasting contribution would be the countless patients, like Daphne Muir, who owed their restored sight to the care and dexterity of this remarkable Welsh surgeon. At that surgical conference in Boston, she reported that the first words she had been able to read after nine years of near total blindness were, “very heaven”. Words that doubtless felt appropriate to someone who had been led from darkness once more into the light by the expertise of Sir Tudor Thomas.

PHOTOGRAPH: THE ROYAL COLLEGE OF OPHTHALMOLOGISTS