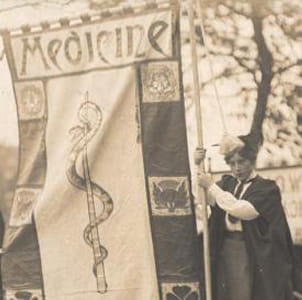 IT’S hard to imagine a more unpleasant start to an anatomy exam. First, you have to walk the gauntlet of a baying mob – several hundred people throwing mud and refuse at you. Once at the exam hall, you find the front gate barred. Luckily, some supporters smuggle you in through a side door. But no sooner is the examination underway than the door swings open and a live sheep is shoved in, creating further chaos.

The so-called Surgeons’ Hall Riot in 1870 was the culmination of months of harassment against the ‘Edinburgh Seven’, female medical students who had matriculated at Edinburgh University. Sophia Jex-Blake and her colleagues were already paying higher fees and arranging their own lectures, but had to put up with doors being slammed in their faces, regular jibes and other aggressive behaviour – and now this.

In the riot’s aftermath, a supportive male medical student wrote to the Scotsman newspaper, castigating the perpetrators. In his letter he referred to the ongoing debate about women becoming doctors as “this vexed question”. What he was referring to was not so much a glass ceiling as a steel door.

It’s impossible to know how that correspondent would have reacted had he been told that 150 years later there would be near parity between the sexes in medicine, as there is today. But he would certainly have been astounded to find his words being used in the title of an exhibition at the Royal College of Physicians celebrating 500 years of women in medicine – to coincide with the College’s 500th anniversary. Not least because the RCP had done so much, in its first 400 years, to exclude women from the formal medical sphere.

“We felt Jex-Blake was an important pioneer in the whole story,” explains Briony Hudson, the exhibition’s curator. “And we thought ‘this vexed question’ was a really good theme to look at in the exhibition, raising debate. 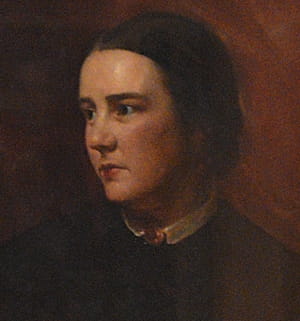 Jex-Blake (left) and her female colleagues never did qualify at Edinburgh, prevented from doing so by the university. She eventually got her MD in Switzerland and then sat the Irish exams with the College of Physicians in Dublin before finally becoming registered in Britain.

It’s the second exhibition this year celebrating the RCP anniversary. The first was on the life and work of the ground-breaking anatomist William Harvey. It was decided, explains Hudson, to contrast this strong story about a well-known medical man with a more "multivocal" consideration of the part played by women over the period. "The relationship between the College of Physicians and women has always been rather problematic. The museum team wanted to be very upfront about that and more analytical rather than just being celebratory," she says.

The result is indeed a very broad look at women in medicine over the 500-year period and beyond – and not just doctors, clearly, considering the time frame, but also apothecaries, herbalists, writers of recipes, midwives and more. One of the earliest artefacts in the exhibition is a page from the Leominster Register of Deeds in the 13th century, confirming the existence of two sisters, Solicita and Matilda, who described themselves as doctors.

From there, the exhibition traces the persistent, if sometimes fleeting, appearances of women in medicine right up to the present day. It shows how, despite the odds – starting with an Act of Parliament of 1511 preventing women, with a few exceptions, from practising medicine – they persisted and fought, defying the rules, using their connections, or simply bamboozling their way into medicine for centuries, before eventually winning the right to freely study, qualify and register as doctors.

So there are women like Alice Leevers, who appeared before the officers of the RCP in 1586 accused of practising medicine. A repeat offender, Leevers had friends in high places and Queen Elizabeth’s Lord Chamberlain wrote to the College requesting that she continue practising. Despite claiming that Leevers was "utterly ignorant" in medicine, the College complied.

Lady Elizabeth Grey and her sister Alethea Talbot were similarly well connected and in the 17th century they published books sharing their medicinal and chemical knowledge more widely. Between 1653 and 1726, Lady Grey’s A Choice Manuall was republished no fewer than 22 times.

A woman who called herself Agnodice – taking her name from a female figure in Greek mythology who dressed as a man in order to become a doctor – boldly advertised her services as a "woman physician" in the 1680s. Margaret Anne Bulkley went one step further, practising as Dr James Barry and rising to become one of the most senior military medics of the 1800s – her secret only being uncovered after her death.

Hudson and the museum team combed the archives in search of letters, testimonies, portraits and other exhibitable material to tell this story. At Lambeth Palace, she uncovered Elizabeth Moore, one of 12 women licensed to practise medicine by the Archbishop of Canterbury (who, in addition to the RCP, had this power) between 1613 and 1696. According to testimonial letters in support of her 1690 application, she treated consumption, lameness, swooning fits, rickets, toothache and pleurisy. One witness said he had used "no other physician for 25 or 26 years … & with good success".

Reaching the late 18th and early 19th centuries, focus shifts from practising medicine to qualifying as doctors. Like Sophia Jex-Blake, Elizabeth Blackwell qualified abroad, in America – having first been rejected by 29 medical schools there. She later became the first British woman doctor to be officially registered, in 1859.

Women were finally able to earn a medical degree from a British university – the University of London – in 1882, although the battle to study on an equal footing to men would go on. Remarkably it was not until 1947 that all London medical schools were obliged to take women students.

In the meantime, women were finally allowed to become members of the RCP in 1909 and fellows in 1925. In 1934, Helen Mackay was the first woman to be elected FRCP; in 1943, Janet Vaughan became the first to be elected to the RCP Council; and in 1989, Margaret Turner-Warwick, a leading chest physician, was elected as the RCP’s first woman president.

By 1972, 20 per cent of practising doctors in Britain were women. Today – 150 years after Sophia Jex-Blake was pelted with mud – that figure is nearer 50 per cent.

The exhibition offers a comprehensive picture of the last 500 years, and to bring things fully up-to-date, the curators decided to ask today’s women doctors to choose something to put on display to represent their careers. One chose an iPhone because "the only way you can manage to be a mother and a doctor is to have all of these different apps".

Coupled with the fact that, for the duration of the exhibition, the portraits of venerable male physicians in the RCP’s Osler Room have been replaced by portraits of equally venerable women, it might well be an indication that "this vexed question" has finally been put to bed.