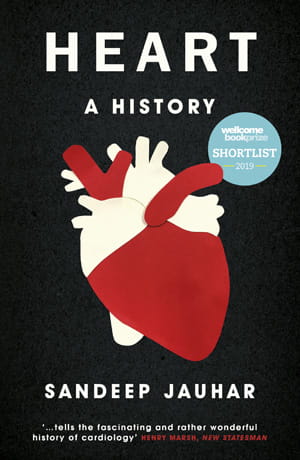 HEART is the story of what Sandeep Jauhar describes as the engine of life. The cardiologist chronicles medicine’s quest to understand how the heart works (and how to fix it when it is 'broken'), while considering how we "can most wisely live with - as well as by – our hearts".

Understandably, therefore, the book is a mix of science (including fascinating facts - heparin was discovered in the brains of salamanders, and "from birth until death, [the heart] beats nearly three billion times") and philosophy ("if the heart bestows life and death, it also instigates metaphor"). And Jauhar considers the two against a backdrop of personal stories 'of the heart'.

Heart will inevitably trigger memories of years spent in medical school laboratories and lecture theatres, as well as the patients you have met over the years. Jauhar gives the backstory to eponyms (like Osler and Billroth), and shares his own clinical experiences to complement the theory.

His chapters (named to describe the heart’s function in lay terms, including 'dynamo', 'pipes' and 'wires') cleverly dissect the organ into its basic parts. These provide a helpful refresher on the heart’s anatomy and physiology.

Jauhar also charts medics' understanding of the heart as a pump, noting that, historically, cultural fallacies limited progress. Those who dared to question the working of the heart risked their reputations and even their lives for disrespecting or challenging its sanctity. And some, like George Mines, paid the ultimate sacrifice as a result of self-experimentation. Historians believe that Mines, who discovered the electrophysiology phenomenon 're-entry', died while exploring the 'vulnerable period' for arrhythmias in a healthy heart.

Besides tracing the giant steps taken by clinicians and researchers to replicate the heart's function (the development of the heart-lung machine and the defibrillator), Heart also considers intertwined issues like medical paternalism, autonomy and consent.

Jauhar quotes pioneering cardiac surgeon C. Walton Lillehei as saying: "You don’t venture into a wilderness expecting to find a paved road". Society is indebted to so many dedicated clinicians who had the courage (and audacity) to probe further and deeper to unlock the mysteries of the heart. And Jauhar’s book is a neatly paved road that makes for an enjoyable journey through this wilderness.

MDDUS strives to make your life easier; you can now notify us of involvement in a potential claim or other matter by logging into your account and completing the contact form