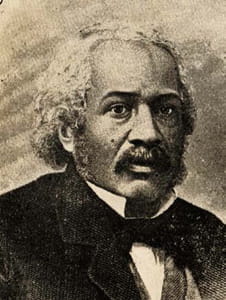 IN THE summer of 1832, a young man disembarked from the transatlantic ship Caledonia and as he stood on the Liverpool dockside, he declared: "I am free!" The 19 year-old was James McCune Smith, a student who had travelled alone across the world to receive an education denied him in his native America. He was articulate and gifted; he was also black and no medical school in the US would grant him entry.

After spending time in Liverpool, Smith continued his travels by steamer to Glasgow where he matriculated at the University. Arriving in Glasgow, he would have found a city of paradox. Glasgow had been at the centre of the New World slave trade, building its wealth on the cargoes of sugar, cotton and tobacco loaded onto the returning slave ships. While the UK may have offered him the liberty to study, he had arrived in a country that would not abolish slavery for another year. But, Glasgow was also an intellectual centre of the Scottish Enlightenment, which saw slavery as philosophically abhorrent. Indeed, this enlightened approach had prompted the French intellectual Voltaire, a generation before Smith arrived, to say: "We look to Scotland for all our ideas of civilisation".

Glasgow at the time was a city already enjoying the benefits, and suffering from the woes, of the industrial revolution. In 1832 it had approximately the same population as Smith’s native New York City, but there would have been considerably fewer black inhabitants and he would undoubtedly have been isolated. However, he was supported locally by the activists in the Glasgow Emancipation Society to whom his benefactors in New York had reached out, in order to facilitate his higher education.

At the University he studied in a class with 78 other young men and tackled a variety of subjects including Latin, Greek, logic, philosophy and astronomy, as well as the more traditional medicine, midwifery and surgery. He graduated with a BA in 1835, an MA the following year and, finally, he obtained his MD in 1837, graduating top of his year.

After qualifying, he furthered his clinical experience in Paris before returning home to New York City, where it is said he was received by an enthusiastic crowd of some 16,000. He set up practice in Lower Manhattan and became resident physician at the "Colored Orphan Asylum", but despite his obvious qualifications and experience, he was never accepted as a member of any New York medical associations or the American Medical Association.

As well as being a practising physician, Smith was also a prolific writer in both the medical and political spheres. In 1844 he became the first African-American to author a paper in a US medical journal and he would contribute important works to further the abolitionist movement. In the latter, he used his knowledge of statistics, acquired at university in Scotland, to systematically refute, argument by argument, the claims made by those who fought against emancipation. In medicine, he targeted homeopathy and phrenology, aiming to debunk the claims of their exponents by careful analyses of the facts.

His position, as the first African- American with a medical degree, gave him considerable kudos, but it was his intellect and industry that allowed him to rise to a position of community leader and to move in the highest circles of the abolitionist movement. Indeed, the most prominent figure in the movement, Frederick Douglass, cited Smith as the single most important influence on his life. Furthermore, one commentator has noted that: "As the learned physician-scholar of the abolition movement, Smith was instrumental in making the overthrow of slavery credible and successful."

Smith lived to hear of Lincoln’s assassination but died in November 1865, one month before the ratification of the 13th Amendment that would formally end slavery in the US. He was buried quietly in an unmarked grave in Brooklyn by his family who did not wish to publicly acknowledge their African-American heritage. It would not be until 2010 that his descendants would rectify this.

Until recently, the only memorial in Glasgow to one of its most famous students was a café that bears his name near the original entrance to Old College in Duke Street. But what of the University of Glasgow itself? Glasgow has been at the forefront of academic institutions acknowledging their historical links with the slave trade and, as part of its programme of reparative justice, it announced in October 2018 that it would name its new £90m learning hub building in Smith’s honour. An appropriate move, no doubt, but perhaps the fact that almost 200 years ago it saw fit to admit Smith when other universities turned him away because of the colour of his skin says even more.

Allan Gaw is a writer and educator based in Glasgow