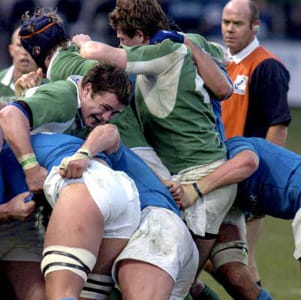 I LOVE watching rugby. This surprises even me. I began watching when my son was selected for his school team (that surprised both of us). His playing career was short and, he’d admit, limited in its impact. He has long since abandoned me and is currently travelling around South America. I have carried on watching. Throughout chemotherapy, the Six Nations kept me going and my Irish RFC green hat was my favourite bald head covering. My enthusiasm is not matched by knowledge. I have patchy understanding of the rules and confess I am often puzzled by what follows from an incident. Nonetheless, I love it.

I am particularly interested in the referees. They have much to teach anyone interested in ethical decision-making. Referees tend to be calm – they model the behaviour that facilitates effective ethical practice. The emphasis on explicit reasoning is fascinating. The players and women spectating on their sofas may disagree with that explicit reasoning, but we understand the basis on which a decision is predicated. We know how to position our arguments because we have context for the decision. Alongside that explicit reasoning is a commitment to supporting players in meeting expectations.

It is common before a scrum, for example, for the referee to indicate what he expects and where teams need to concentrate their efforts to avoid infractions and penalties. The assumption is that people wish to do the right thing and the aim is to optimise the circumstances in which they are working rather than imposing sanctions ex post facto or worse, setting them up to fail. Naturally, the referee cannot allow teams or individuals to abrogate responsibility and most rugby fans will recall a courteous but firm Roman Poite in 2017 reminding Dylan Hartley and James Haskell that he was the match referee rather than their coach and referring the players back to England manager, Eddie Jones for guidance.

The standards to be applied are clearly articulated and transparent, yet the referee will, inevitably, have to use his or her (for an example of a splendid female referee, look no further than Sara Cox or, in rugby league, to Julia Lee) discretion. There is no dodging interpretation. An effective referee knows when to be flexible and how to weigh context in applying the rules of the game. Sometimes, he or she will need to draw on character traits – to embody virtue ethics – and be courageous in taking decisions that are difficult or contested.

Referees have one of the most important elements to facilitate their decision-making, namely time. The clock is stopped whilst deliberations are ongoing and although there is clearly a limit to the amount of time that is allowable in a match, that act of pausing to consider the best choice matters both on and off the field. Wisdom is more likely to flourish when the clock is not looming large.

The referee is accountable for the ways in which he or she chooses to exercise their inherent judgement. It is not possible to duck that accountability or to pass the buck. Responsibility is embraced, if not perhaps welcomed, especially when a decision earns the opprobrium of rugby players, managers and supporters. When a referee makes an error, admission and an apology follows. This was demonstrated in the crucial Wales v Ireland match of the final Six Nations weekend when Angus Gardner reversed his decision to award a penalty in Australian style with the words: “sorry guys, my bad”.

Of course, rugby referees do not work alone. An effective referee is part of a team and has to work with the assistant referees, who will provide different perspectives, crucial information and informed advice. Additional evidence will be factored into the decision-making and becomes part of the referee’s reasoning when he or she makes the determinative call. Sometimes, as in clinical ethics, a referee will be open about having an intuition or a sense that something is right or not. He or she will admit that they are initially inclined to think x or y in a given situation.

Yet the referee knows that intuition alone may be seductively powerful but is not sufficient in effective decision-making. The interrogation and testing of that intuition by considering and reviewing the evidence is vital, just as in ethics the capacity to explore the full range of information and perspectives, including and perhaps especially those that are less immediately persuasive, matters. Thus it was in the final and compelling match of this year’s Six Nations between England and Scotland when referee Paul Williams reviewed the TMO footage and reversed his decision to award a try.

Ethical analysis and practice reside in unlikely places; there is no substitute for a Socratic scrum on a Saturday whichever side one is supporting.