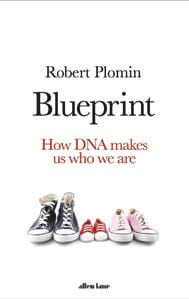 THE psychologist Robert Plomin argues in his comprehensive new book Blueprint that “genetics is the most important factor shaping who we are”. A keen advocate of ‘nature’ being the design of our individuality, Plomin writes that he does not intend to discard the influence of ‘nurture’, but holds that this is “mostly random”. His work argues that the findings of decades of DNA research will shape the way we predict mental illness, and also influence how we parent and teach.

Plomin clearly wants to start a discussion. He considers heritability (“the one per cent of DNA that differs between us and contributes to our differences in behaviour”) to understand the reason why we are different psychologically, even when environments are shared. He states that while our circumstances will direct outcomes, the genetic differences in personality increase this happening. So our genetic makeup will determine our response to external events. That is, he argues that genetic research into ‘nurture’ “suggests that environment is imposed on us more actively than passively”.

‘What about the impact of death, illness or divorce?’, I hear you exclaim. Plomin argues that, genetics aside, any significant environmental factors boil down to chance. They involve random experiences over which we hold little control. As such, Plomin concludes that longterm effects are insignificant, and we inevitably “bounce back to [our] genetic trajectory”.

He writes “life experiences matter, but they don’t make a difference”. He believes even societal factors have little impact on personality. Such assertions are sure to spark debate.

Plomin also explores the impact of this theory on individuals, society and psychology. He looks, for example, at predictor scores for mental illness, including schizophrenia and Alzheimer’s dementia, considering how we may use the findings to improve future detection and management. He does acknowledge the dilemma in identifying genetic risk when we are (currently) unable to do anything about it.

This book is accessible and thought-provoking.