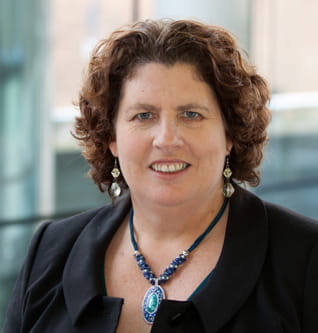 IN NOVEMBER of this year Professor Maureen Baker will step down after three testing years as Chair of the Royal College of General Practitioners, making way for her successor Dr Helen Stokes-Lampard.

Professor Baker worked for over 15 years as a GP in Lincoln and was Honorary Secretary of the RCGP from 1999 to 2009. In 2007 she joined NHS Connecting for Health (CfH) and was Clinical Director for Patient Safety at the Health and Social Care Information Centre. She has also held appointments with the National Patient Safety Agency, NHS Direct and the University of Nottingham.

She is originally from Scotland and studied medicine at the University of Dundee.

How have we come to the current state of “crisis” in general practice?

I do think it’s largely because of the consistent, repeated underfunding of the service over the last 10 years. There have been a variety of reasons for this. There was an abreaction following the 2004 contract where the press kept going on about GP pay and how GPs had done too well out of that – which in no way justifies not investing in the service adequately. Also I think there has always been this short-term reaction to the part of the system that makes the most noise. Generally over the last 10 years that’s been the acute sector. Pressure on the acute sector becomes very visible with pictures of ambulances queuing outside A&E departments and patients made to wait many hours. What was happening in general practice wasn’t hitting the headlines; so it wasn’t picked up and addressed.

Do you think NHS England is on the right track with its General Practice Forward View?

Yes. I do. I think it’s a hugely ambitious statement of confidence in the service of general practice and we were very pleased to welcome it. Is it enough? Well I hope so. I certainly hope it is enough to turn around the fortunes of general practice and the profession, and to be able to build on from there. I do think the direction is absolutely right in terms of addressing the fundamental issues of funding, workforce and workload.

Do you think there should be an equivalent GP Forward View in Scotland?

I think there should be a plan to address these three key issues in every nation of the UK.

What do you think is the highest priority for the NHS in addressing recruitment in general practice?

In England, I think the GP Workforce 10 Point Plan set us off in the right direction – looking to see what is working and how we can build on that. For instance, the financial incentives to recruit trainees into under-doctored areas: initial impressions suggest that this is having an effect. So if that works it might be extended. Recruitment roadshows are also important: spreading a positive message about general practice and helping to dispel some of the myths. In his foreword to the GP Forward View, Simon Stevens writes: "There is arguably no more important job in modern Britain than that of the family doctor”. Now that’s a hugely powerful statement coming from the head of the NHS. So I don’t think it’s any one initiative: it’s putting them all together and applying them at the same time. The aggregation of marginal gains – the Team GB Cycling approach – is what we need to bolster the workforce.

For me there is something very important about the expertise of the generalist. We talk about GPs as the expert medical generalist – the last bastion of clinical medicine. Where else in medicine are you making decisions based on your clinical skills, the patient history, doing something there and then without a panoply of other colleagues or the ability to get instant investigations? But generalists, almost by definition, have a wide range of interests. Therefore it is not at all surprising that people might like doing some of the things they learned in hospital and applying those in the community setting. For many people it’s an added attraction. So, for example, people who like doing minor surgery can do that in general practice.

Considering the talk around mass resignations how can the government best retain the GPs it does have working in the NHS?

Again, by addressing the fundamental issues of funding, workload and workforce. It has to be an enjoyable, worthwhile job and if it doesn’t feel like that, people won’t stay.

Do you think that GP induction and refresher schemes could be improved to boost GP numbers?

They are much better than they were. But the one in England, which I’m most familiar with, still has a huge number of hoops to be jumped through. It’s not very well integrated and could be very much more streamlined, and I think we could support people through it much better. We are keeping the pressure on NHS England and HEE to try and do that.

Do you worry that recruiting physician associates and similar initiatives to address GP shortages could undermine the profession?

I do think there is a case for extending the workforce in general practice and for introducing additional skills; for instance, having practice-based pharmacists is a very good example of this. In terms of physician associates in general practice, we’re neutral. They have never really taken off in general practice and I’m not sure why that is. On the other hand, if practices feel that having a PA works for them and that they are valuable members of the team – that’s great. Why would you stop that? But I think the jury is out in that we haven’t yet had much experience of this role in general practice to determine whether it’s useful or not.

Are GPs misunderstood in general and more particularly by the media?

I think we always need to come back to GPs being hugely valued by the public That is undoubtedly the case – the most highly valued public service by far. But we are also an easy target and certainly the media in recent years has really jumped on the GP-bashing bandwagon. No denying there are problems – one of the issues they get very agitated about is access and that is a legitimate problem. There is more demand than there is supply when it comes to GP appointments. I think recently the media have maybe started to realise that the issues around access are not because GPs aren’t working flat out; it’s just that there aren’t enough of us.

I think we always need to come back to GPs being hugely valued by the public.

What is your take on Brexit and the implications for healthcare in the UK?

What do you feel was the high point of your time as Chair?

Publication of the GP Forward View. We’ve been campaigning for the best part of three years and this is the response to just about everything we have been asking for in our Put patients first: Back general practice campaign. It was a really important moment.

What has caused you most frustration?

What would be your one piece of advice to your successor in the job?

It’s a marathon not a sprint. The term is three years and you have to pace yourself and give time for things: work something up, sell the idea, get it rolled out, get it evaluated and start seeing it take root. You can’t expect to change the world of general practice in three months, six months or a year.

Being realistic for patients

Dr Catherine Calderwood talks to Summons about her ambitious plans for a common sense, patient-focused approach to healthcare

Personal health budgets aim to give patients greater control in managing their care – but are they fair and effective?