Ethics: A girl I used to know - on Derry Girls and ethical development 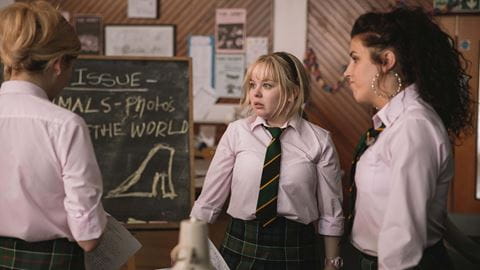 THE bittersweet poignancy of watching series three of Derry Girls has permeated the last couple of months. Its humanity is unsurpassed. Relationships are testy, often difficult and rife with misunderstanding yet overflow with love and friendship. Optimism and hope are palpable beneath biting sarcasm and witty ripostes. I watch Derry Girls, and I recall the exquisite awkwardness and uncertainty of my own teenage years, not in Northern Ireland, but in a Catholic school where nuns were part of the staff. I remember the intensity of relationships, the search for a sense of self and the ways in which political stories came in and out of focus depending on my preoccupations at the time.

The episode in the series that I found almost unbearably moving was not the much-discussed perfect finale to the programme, but an earlier one in which the protagonists’ parents returned to the school for a reunion. We watched them regress to selves that were always discernible beneath the weight of adulthood and domestic responsibilities.

The flashback scenes of their own teenage years were intercut with images of them dancing at the reunion. The adults demurred to nuns who conveyed their moral expectations even for those in their thirties and forties. Their dancing, their responses to each other, their priorities and character quirks were as they had always been; the essence of them remained.

When and how do we develop the values, principles and ethical precepts that we hold as adults?

One of the earliest refrains from young children is “it’s not fair”. We use morally-infused language, collectively and individually, with even the smallest child exhorting them to “be good” and encouraging the capacity to share, forgive, help others and recognised their connectedness to others.

Moving from the stage that Freud described as “his majesty the baby” to a more sophisticated understanding of our relationship to others is a vital developmental step in which we learn to relinquish self-absorption and appreciate that our needs and wishes will not always prevail.

As we move to school, the circle of ethical influence expands. We meet teachers (convent school or not), make friends and are exposed to a host of stories in which heroic and virtuous children triumph over evil witches, fairies and step-parents. We begin to make our own moral choices about how to behave and be with other people.

Do we join in with teasing or even playground cruelty? Do we allow someone to copy our work or ask if we can copy someone else’s work? We become aware of honesty and the concept of the ‘white lie’. We start to realise that we have to balance competing moral considerations and claims in deciding what to do. As we grow, we start to see that the adults we might have idealised, or demonised, are human beings with flaws and opinions that may not always make sense to us. We start to look more widely in our quest to understand the world and our place within it. All the time, our ethical awareness is developing, along with our ethical blind spots.

As we develop, we change, but is there something of an ethical essence in us all that is worth exploring? We do not arrive in a profession that has ethical standards and moral expectations without assumptions, enduring influences and relational legacies. Those will shape, consciously and otherwise, how we perceive and engage with ethics.

The personal is inherently professional in terms of ethics. Our childhood, our role models and cautionary tales, what we internalised about what it is to “be good”, the conversations we overheard about moral questions and the relationships we developed all inform what might be called our ethical essence. Our personalities and characters also shape how we think about ethics and the development of an ethical essence. How disposed are we to openness and curiosity? Do we find disagreement uncomfortable or do we thrive on argument and debate? What are our natural preferences in terms of risk and rules? Why do we react intuitively to moral questions?

My ethical essence, recognising I may not have the insight I think I do, can be traced back to my earliest days, especially those spent in a Catholic school. Just as the parents in Derry Girls brought their younger selves to the reunion, so I too bring an ethical essence as much as my qualifications and professional experiences in ethics. It can be both positive and negative in its effects; but it is nonetheless there.

As Erin realised in season one of Derry Girls, we are inevitable products of our ethical influences: “I wanted to be an individual, but my Ma wouldn’t let me.”, prompting Claire’s reply “well, I’m not being an individual on me own.”