PURSUING a dental career takes a lot of time and money, and competition can be fierce. It is not surprising, therefore, that people from poorer backgrounds are statistically less likely to enter the profession. So is this imbalance all about money or are other factors at work? And what can be done to widen access to the profession?

A research team led by Kate Purcell at the Institute for Employment Research, university of Warwick, has studied factors aff ecting access to higher education. The first phase of their Futuretrack study surveyed 130,000 people applying to higher education, while the second questioned 50,000 full-time students after their first year.

Results from the second phase, published in the Times in November 2009, identified cost as the number one deterrent for those who apply but do not enter higher education. Almost 40 per cent said they were put off by cost, while 32 per cent were deterred by the prospect of incurring debt.

No doubt debt is a substantial factor for prospective dental students. The cost of dental study combined with the length of the dental programme, particularly in comparison to other undergraduate courses, can seem understandably daunting. The shorter holiday periods also limit opportunities for earning extra in seasonal jobs.

Cost became even more of an issue in 2012 when tuition fees in England increased from £3,000 to as much as £9,000. Figures from UCAS show that between 2011 and 2012 the overall number of university applicants in England fell by 10 per cent while medical and dental applications decreased by 2.6 per cent (although these numbers recovered slightly the following year).

Interestingly, a UCAS report from November 2014 found the rise in tuition fees did not increase inequality in accessing higher education. They concluded that “neither application rates nor entry rates have shown any diff erential effect by background.”

Those countering concerns over high fees and debt often point to the fact that foundation dentists are paid £30,132, signifi cantly above the uK national average salary of £26,500. unemployment is also rare in dentistry and the prospect of a secure, well-paid job may mean that young people will be more prepared to take a punt on investing in a dental degree versus a more esoteric subject with an uncertain financial future.

Despite its appeal, research shows students from poorer backgrounds are still less likely to apply for more selective courses such as dentistry. And while cost is no doubt one deterrent, other factors may be involved – including low educational attainment and perhaps also a belief that such a career would not be a realistic option, a mindset that could stem from social expectations and/or family dynamics.

An official report by the Scottish Funding Council in November 2014, entitled Learning for All, highlighted the gulf in attainment between state schools in the wealthiest and poorest areas. Only 3.9 per cent of pupils in Scotland’s most deprived communities managed to get three A grades in their Higher exams compared to 24 per cent in wealthier areas.

With competition for dental places strong, this factor can only hamper attempts to get more disadvantaged students into dental school. Indeed, the report noted: “Lower levels of school attainment among those from more deprived backgrounds is likely to impact on the ability of institutions to recruit students from these backgrounds.”

One proposed solution is for dental schools to make diff erential off ers to “compensate” for lower academic attainment related to socioeconomic disadvantage, although this has proved a contentious issue.

One measure introduced in 2006 to increase equality was the UK Clinical Aptitude Test (UKCAT) which forms part of the undergraduate application procedure for most dental schools. It aims to assess a candidate’s mental abilities, attitudes and professional behaviour (rather than solely academic or other factors) to achieve “greater fairness in selection to medicine and dentistry and to the widening participation in medical and dental training of under-represented social groups.”

Having work experience in a dental environment remains an important part of the undergraduate application process, but currently there is no national system in place to ensure fair and equal access. Such opportunities are found on an individual basis, and often through support structures within the school or through the professional networks of family and friends. Applicants from poorer socioeconomic backgrounds may not have the same support and access to work experience as those from wealthier backgrounds whose parents or friends may be well connected within the professions.

Although some dental hospitals and universities offer work experience placements, stronger links between schools and local dental facilities could open up opportunities and encourage students who otherwise may have never considered a dental career.

There are a number of uK organisations and initiatives designed to improve access to the profession. The Sutton Trust work to “combat inequality and prevent subsequent waste of talent” by supporting fair access to work experience, as well as funding other programmes to reduce inequality. The Russell Group of universities have also pledged to spend £235 million in 2015-2016 “supporting students from less advantaged backgrounds”, off ering scholarships, fee waivers and bursaries. The Access to Dentistry scheme at Queen Mary, university of London aims to “raise aspirations and awareness of dentistry as a career pathway among students from groups that are signifi cantly under-represented within the profession.” A similar, two-year scheme also operates in the university of Sheffield. But the Group have called for more to be done, saying: “School attainment, advice and aspirations must all be dramatically improved if we are to remove the real barriers to fair access.”

Practical financial help is also available. Since the rise in tuition fees, there has been a rise in the number of grants awarded to students from low income households. Most universities offer hardship funds while some off er scholarships to students who fit certain criteria (for example, if they are the fi rst in their family to go to university). Prospective dental students can also apply for NHS financial support, including grants, loans or bursaries depending on living circumstances and household income.

Dentistry remains an attractive prospect for young people but the stalling of social mobility is still an issue. And while there are many measures in place to make dentistry more accessible, more needs to be done to open up the profession to all, regardless of background. 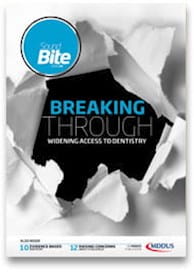