IN 1961 a new volunteer signed on with the Royal National Lifeboat Institution at Yarmouth Harbour on the Isle of Wight to help crew the local lifeboat – the Earl and Countess of Howe. He was a seasoned yachtsman but otherwise not a typical recruit, being the former Muirhead Chair of Medicine at Glasgow Royal Infirmary.

Professor Leslie J Davis loved the sea and records show that in the years 1961-64 the Howe and the reserve lifeboat, the Elizabeth Elson, took part in 28 missions, rescued 55 persons and 15 small craft – not exactly a quiet retirement. But it was typical of LJ who was an exceptional man in many ways.

Born at the turn of the century LJ saw active service at sea in the 1914-18 War in which he served as a wireless operator. At the end of the war, he studied medicine at Edinburgh after which he took up posts in East Africa for some years before moving to Hong Kong. His duties were mainly in laboratory medicine.

When the Second World War became imminent, he returned to Edinburgh to work with Sir Stanley Davidson. He was appointed to the Muirhead Chair of Medicine at Glasgow in 1945. At the time of his appointment, perhaps surprisingly, he was not widely experienced in clinical medicine. His students were soon to realise this. He often wore a bow tie and his quote in their yearbook was ‘a test tube with a bow tie’. The bow tie was not seen again by his students. He was highly intelligent, a shrewd judge of men and picker of staff.

LJ anticipated that medical specialisation was inevitable and under his guidance the use of isotopes in medicine (Edward McGirr), haematology and coagulation disorders (Stuart Douglas), nephrology (Arthur Kennedy) and rheumatic disease (Watson Buchanan) all flourished. The Department was able to select the pick of new graduates for house posts, registrars and junior academic staff, several of whom were to retain links with the Department for years. A healthy rivalry developed with the sister academic units at the Western Infirmary.

Leslie Davis had rather a brusque manner – not without reason was he known in Hong Kong as Tiger Davis! He was to mellow as his department flourished. He addressed all his staff by surname – it was only in his retirement that he used my first name. His wife, Marjorie, in contrast, was charming. They had no children and I recollect at a Sunday morning visit with my wife and infant daughter, in her carrycot, he said: “Well, Kennedy, what’s her vocabulary?” Marjorie protested “Leslie, I remember your mother telling me that you didn’t utter a word until you were two”. “Humph” was the response. Although childless himself, it was later learned that he was supportive of a nephew in England who lost his father in World War I.

Both Davis and his wife enjoyed sailing on the west coast of Scotland. Their yacht (named Le Mar from their own names) was built to specification at Clynder on the Gairloch. Unmarried registrars were enlisted to assist when he was involved in racing. Stuart Douglas (later appointed to the Chair in Aberdeen) was on one occasion swept overboard in rough seas in a round-Arran race. Fortunately, he was attached to a line and was hauled back on board. Stuart said later that he envisaged LJ considering his options – “pause to let me get back on board and lose the race or…?” He did win the race but on a later occasion!

LJ was a Fellow of the three Royal Colleges of Physicians in the United Kingdom, of the Royal Society of Edinburgh and a member of the Association of Physicians of Great Britain and Ireland. He served as external examiner in Edinburgh and in Hong Kong. It is surprising and disappointing, in view of his sterling contributions to medicine in Glasgow, that he did not receive a national award although three of his academic staff did become CBE.

He retired when he reached the age of 60 and moved to Yarmouth where he continued sailing. In addition to being on the crew, he was also a committee member of the Yarmouth Lifeboat from 1962 until his death. 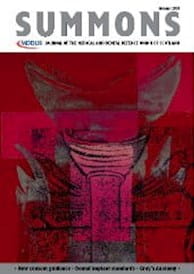