The debate is fierce and continuing – but regardless of your stance on assisted suicide, it’s important for all medical professionals to have a clear understanding of current law on the matter

IN 1995 Debbie Purdy was diagnosed with primary progressive multiple sclerosis just after first meeting her husband, jazz violinist Omar Puente. Over the next few years her condition worsened to the point she began to consider the eventual option of ending her own life at a Swiss assisted-dying clinic. Fearful that her husband might be prosecuted for helping her travel to the clinic she sought clarity on the UK law on assisted suicide.

The Suicide Act 1961 makes it an offence in England and Wales to encourage or assist the suicide or attempted suicide of another person and carries a jail term of up to 14 years. But prior to Purdy’s case some 101 Britons were known to have died with the assistance of Dignitas, an assisted-suicide charity in Switzerland, and none of the relatives had been prosecuted.

Both the High Court and Court of Appeal ruled that the courts could not change the law and Purdy’s case was eventually taken to the House of Lords. Here the Appellate Committee ruled that the Director of Public Prosecutions (DPP) must clarify “what his position is as to the factors that he regards as relevant for and against prosecution” in cases of encouraging and assisting suicide. This landmark decision did not change the law – only Parliament has that power – but it did pave the way for the publication in February 2010 of the DPP guidance Policy for Prosecutors in respect of Cases of Encouraging or Assisting Suicide.

This document, which applies in England and Wales, was the result of a public consultation exercise with almost 5,000 respondents commenting on interim guidance produced in September 2009. It provides a list of factors for prosecutors to consider in cases of assisted suicide – 16 in favour and six against. Some of these factors are clearly relevant for doctors.

In particular among those tending in favour of prosecution are:

Among factors tending against prosecution are:

The policy makes clear that each case must be considered individually on its own facts and merits and a prosecution must be deemed “in the public interest”. But these factors do seem to indicate that there may now be a lower threshold for prosecution of doctors.

Risks to doctors and health professionals

So in what circumstances is a doctor likely to fall foul of the law and are the risks increased with the new guidance? The most obvious circumstance is when a patient directly requests assistance to commit suicide, for example the means by which to end his or her life. This is very distinct from a request for a doctor to take action to end a patient’s life – in which case the offence of murder would be relevant.

Doctors may also be asked to provide medical reports or copies of records in circumstances where a patient may be contemplating assisted suicide and it is possible that provision of this information could at a later date fall within the offence of assisted suicide. The advice to any doctor faced with requests from patients who (it is apparent) may be considering suicide has to be to consult their defence organisation, particularly taking into account the DPP’s emphasis that each case must be considered on its own facts and merits.

Application of the guidance

Only a few cases have been considered since publication of the guidance and none have ended in conviction. One case involved Dr Michael Irwin, who accompanied a patient with pancreatic cancer to a Dignitas clinic in 2007 and paid £1,500 as a "contribution" to the costs. The prosecutor in the case concluded that the patient was a strong-minded man with the capacity to make an informed decision and "clearly did so without any pressure from Dr Irwin or anyone else".

Another case involved an 84-year-old retired GP named Libby Wilson – a founder of the pro-euthanasia group, Friends at the End (Fate). She was questioned by police on suspicion of aiding, abetting, counselling or procuring a suicide for a multiple sclerosis sufferer of many years who died at home after speaking to the doctor twice by phone. It was decided to be not in the public interest to proceed against the doctor as her involvement was found to be "minimal" and out of "compassion" contributing only to the suicide victim’s "preparations".

Perhaps it is no coincidence that organisations such as Fate or Dignity in Dying are behind moves to change the law. Last November saw the launch of The Commission on Assisted Dying, chaired by the former lord chancellor, Lord Falconer, which will examine how relatives may be able to have lawful permission to assist a loved one to commit suicide. This will include considering whether it might be appropriate to obtain a medical opinion or whether patients should apply to a judge for a court order.

In addition to Dignity in Dying, the Commission is supported by pro-euthanasia supporter, author Terry Pratchett, and this has lead to questions on the independence of the Commission from disability charities and those working in palliative care. But it does seem likely that changes to the law will be proposed which may lead to assisted suicide being permitted, subject to certain safeguards. What the doctor’s role in these new arrangements will be is unclear but there may be legal obligations to be met. It will be interesting to see how these will sit with the moral and ethical obligations of medical practice.

The Suicide Act 1961 does not apply in Scotland, and although assisting a suicide is not a statutory offence it is still illegal north of the border. An individual suspected of this may be liable to prosecution under the common law of culpable homicide. The new DPP guidance is of no real assistance in understanding when or why the Crown office in Scotland is likely to pursue a charge of culpable homicide in cases of assisting a suicide and there is no similar guidance available from the Lord Advocate in Scotland. Just as in England, the test for the Crown office and procurator fiscal service in every criminal case is whether or not a prosecution is in the public interest.

Our advice to members practising in Scotland is nevertheless the same as in the rest of the UK: medical professionals should exercise real care when considering requests for medication, medical reports or copies of medical records, where there is a suspicion that the purpose of the requests is to gain the means or information with which to assist a patient’s suicide. Members are advised to contact MDDUS promptly for advice in such circumstances. 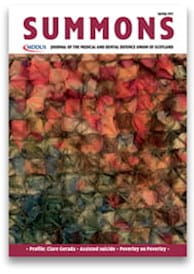