YOU only have to scroll through #MedTwitter to get a sense of the current discontent in the junior doctor community. And this does not start and end with pay. Many factors are at play, contributing to low morale and exhaustion.

We recently sought to delve into young doctors' experiences to better understand the issues plaguing the profession. Our survey of 850 members produced striking results.

Our investigation found that one in three UK doctors aged between 25 and 34 are rarely or never able to buy nutritious meals or snacks during working hours. It also revealed:

Dr Billy Wilson, an anaesthetist working in the north of England, told us: “Doing this job and being hungry at the same time is a challenge.

“Being able to eat and drink, rest and have time to go to the toilet are fundamental basics and the cornerstone of your daily existence. Take them away and working conditions will simply deteriorate.

“When you work in a hospital situation where a wrong decision can have dangerous consequences, then the risk is even greater. That’s why the current position facing doctors working long hours on night shifts affects their patients, too.”

Dr Mariam Mourad, a paediatrician working in London said: “Hunger can affect a doctor’s decision making. But when being so hungry makes you less compassionate towards your patients then that is a substantial shift in your entire practice of medicine.

“Having access to food and dedicated rest facilities, rather than scavenging for an empty ward to put our feet up in for a few minutes, makes a massive difference to the quality of care I can give.”

Another 24-year-old hospital doctor from Aberdeen commented: “Being able to get something decent to eat at work just feels like the bare minimum we should expect on the job.

The risks of a hungry doctor

Dr John Holden, Chief Medical Officer at MDDUS, explains: “We all know how we feel when we haven’t eaten a proper meal – tired, groggy and fatigued. Not even being able to access food from a vending machine is unacceptable; ultimately, patients will suffer.

“Nutritious food is vital to give doctors the energy they need to deliver care to their patients. We must remember that doctors don’t work nine-to-five office hours. They spend extended periods of time in hospital wards and often do not have the chance to leave the hospital or ward to get food.

“I have heard of doctors ordering takeaways as a short-term solution to the problem. But this has its limitations. It is costly and being able to buy food with good nutritional value is also tricky.

“A tired doctor is a doctor with increased risk who is more likely to make mistakes. Good food should be a simple prerequisite for doctors going to work or, at least, having facilities available to make food – many tell us they don’t.”

“A tired doctor is a doctor with increased risk who is more likely to make mistakes.”

The Royal College of Emergency Medicine (RCEM) has expressed how its members strongly identify with our survey findings. Dr Hannah Baird, co-chair of the Emergency Medicine Trainees Association at the RCEM, said: “In emergency medicine the shifts are long, and they are tough.

“For a lot of colleagues, it is difficult to access a nutritious meal while working. This damages morale and makes staff feel undervalued and contributes to burnout and exhaustion.

“There is little to no time for a restful break to have a meal, particularly over nights where the evidence supports the need for a break and good nutrition. Colleagues are going above and beyond, working longer hours, and becoming increasingly tired and burnt out.”

Doctors going hungry is not a new issue. Neely Mozawala and Dr Saliha Mahmood Ahmed set up the No Hungry Staff campaign last year after discovering that 84 per cent of NHS staff don’t have access to a hot food service when working a 12-hour shift. Since then, they have been on a mission to make 24/7 provision of hot, affordable and nutritious food a reality for NHS staff.

Their campaign has successfully influenced policymakers to include a commitment to 24/7 provision of food to NHS staff within the most recent NHS England National standards for healthcare food and drink.

Following the MDDUS survey results, our chief executive, Chris Kenny, contacted all chief medical officers across the UK, urging them to place this issue at the top of the agenda.

He wrote: “We know that consistent access to basics such as hot meals can substantially reduce workplace stress – Professor Sir Gregor Smith, the chief medical officer for Scotland, has said as much.

“That’s why I’ve written to Prof Sir Gregor and his counterparts across the UK, urging them to prioritise working with policymakers to make urgent and sustainable improvements to NHS staff experience.

“Doing this will remove a barrier to doctors providing consistent care and support to their patients.”

In addition, Chris Kenny has also written to MPs and MSPs across the UK, highlighting this critical issue, which led to Dr Sandesh Gulhane, MSP, raising our survey findings in Scottish Parliament, saying: “That is really worrying, and it is symptomatic of a management culture that does not prioritise frontline healthcare workers.”

MDDUS will continue to raise awareness of this issue on behalf of our members, ensuring it does not fall out of ministers’ sight.

Caroline English and Lisa Walker are communications managers at MDDUS 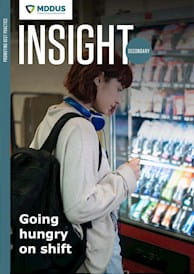