A 78-year-old retired teacher – Mr L – attends his GP surgery complaining of abdominal pain. He is seen by Dr W, who records a history of generalised abdo pain, 3 weeks; appetite unchanged; normal daily bowel. On examination she finds a soft abdomen with some tenderness but no guarding and no obvious masses or organomegaly. Bowel sounds are normal. A preliminary diagnosis of diverticular disease is recorded and a treatment plan is discussed with Mr L, involving blood tests and a referral for sigmoidoscopy and a barium enema. The blood tests are carried out (later results found to be “normal”) but Dr W is distracted by another difficult case and neglects to action the referral.

Mr L returns to the practice for a routine hypertension check with the practice nurse. He has attended the practice twice in the interim period for a chronic skin condition but without mention of any abdominal discomfort. The nurse records: some tummy pain but pt says he has a gallstone and has put off operation. Advised to see dr with any ongoing weight loss or pains. His blood pressure is within normal limits and Mr L is asked to book another check-up in six months.

An emergency appointment is made at the surgery by Mr L’s wife. He is seen by a GPST who records: Low colicky abdo pain intermittent over 4 wks; now more severe. Mr L says he has been vomiting after eating although he is tolerating liquids well. He reports occasional problems with constipation and his last motion was a couple of days ago. The GPST examines Mr L and reports a soft but distended abdomen with mild tenderness over lower left quadrant. Anal tone is normal on rectal examination with a hard stool in the upper rectum. His diagnosis is constipation and a prescription for macrogol is issued. Mr L is told to return if there is no improvement or his symptoms worsen.

Mr L attends A&E complaining of severe abdominal pain and vomiting. He is referred to the surgical department. A CT scan reveals a large bowel obstruction, and an emergency resection of the sigmoid colon is undertaken with a colostomy in the left lower quadrant. Mr L is assessed to have a Dukes C1 tumour with extra-mural invasion involving local lymph nodes. Further investigation reveals spread to the liver. Mr L develops a wound infection and sepsis, and three days later suffers a fatal cardiac arrest.

A LETTER of claim by solicitors representing the family is sent to Dr W alleging clinical negligence in her treatment of Mr L – in particular her failure to arrange a referral for investigation of his abdominal symptoms as noted in the treatment plan.

A review by a GP expert is commissioned by MDDUS. His view is that there was a breach of duty of care on the part of Dr W in not making the relevant referral as set out in the treatment plan. This is irrespective of the fact that Mr L presented with only generalised abdominal pain and no red flag symptoms, and in such circumstances a referral for further investigations would not have been required in terms of the NICE guideline for colon cancer at the date of the appointment.

A separate report on causation (consequences of any breach of duty) is commissioned from a consultant medical oncologist. She opines that, had Mr L been referred for a barium enema or sigmoidoscopy, the tumour would have been diagnosed and surgically removed within two to three months. On the balance of probabilities this would have revealed a likely T3, N0, M0 or a T3, N1, M0 tumour. Mr L would not at this stage have presented with large bowel obstruction needing emergency surgery, and would have likely avoided the sepsis and subsequent cardiac arrest.

The expert also states that, with earlier detection, Mr L would, on the balance of probabilities, have avoided metastatic spread and enjoyed a significantly extended life expectancy. Even with metastatic spread, he would likely have survived for approximately 18 to 24 months with good quality of life. In light of the risks associated with proceeding to litigation, MDDUS negotiates an out of court settlement in agreement with the member. 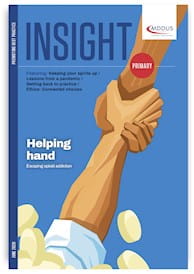