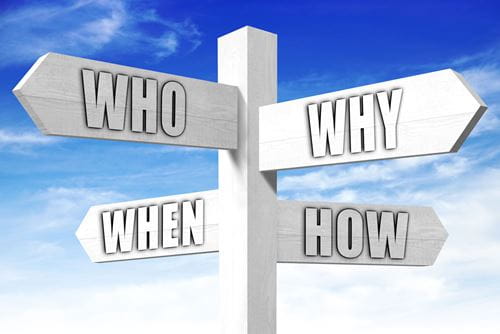 REFERRALS are a common part of dental practice, but they are also a fairly frequent topic for advice and complaints.

What do you do if a patient refuses a referral, or if you overlook a symptom that should have prompted a referral? When might it be appropriate to seek a second opinion?

The following case studies look at common challenges for clinicians in this area.

An elderly patient, Mr H, has a white patch on the floor of his mouth and the dentist is concerned. She explains to Mr H that she would like to refer him to the local oral medicine department, but the patient declines. Mr H has capacity, and so the dentist cannot send the referral without his consent.

MDDUS suggests the dentist might wish to speak to Mr H and explore his reasons for refusing referral, being sure to carefully explain the risks of not seeking an opinion as well as the benefits of referral. It transpires that Mr H is simply worried about how he will get to the dental hospital. Once the dentist reassures him of travel options and explains more about how the process works, Mr H agrees to referral.

A patient, Ms A, needs to have a fractured root-treated molar tooth extracted. The dentist attempts extraction but is unable to remove the mesial roots and tells Ms A that she will have to see an oral surgeon for surgical extraction. Ms A is annoyed as she was not warned of the risk of this complication.

The difficulties cause the dentist to fall behind in his schedule and he forgets to record the discussion regarding referral in Ms A’s clinical notes. As a result, the referral is not made.

Ms A gets back in touch a week later complaining of continued pain and seeking an update on the referral. The dentist realises his error and asks the practice manager to send the referral that day, telling the patient that it is practice policy to send a referral within 10 days. Later, the dentist discovers that the PM noted the wrong tooth on the referral form.

The dentist seeks assistance from MDDUS and is advised that a blanket policy regarding the timeframe for sending referrals should not be applied, given that some are time sensitive. The dentist is also advised to send his own referrals, rather than delegating to a team member, as he will be held responsible for any inaccuracies.

Given the vulnerabilities with respect to pre-operative warnings, record keeping and the errors in referral, MDDUS helps the dentist to arrange treatment for Ms A with an oral surgeon, free of charge.

A dentist completes orthodontic aligner treatment and is pleased with the outcome. But the patient, Mr J, is not happy and wants a full refund. He feels he does not have the perfect result predicted by the aligner company and that there is very slight rotation of one of the upper lateral incisors.

An MDDUS adviser tells the dentist that, when there is a difference in opinion between a dentist and patient regarding treatment outcome that cannot be resolved, one option is to offer a second opinion – either with a suitable colleague in the practice or via external referral. This is with the understanding that the next clinician might concur with the first dentist or might suggest that further treatment is indicated.

After seeking patient consent to refer, at least two referral options are offered to Mr J to reassure him that an independent opinion is being sought. The referral letter is written in a neutral tone, using a standard format. The next clinician assesses the current position of Mr J’s teeth and advises him that they are well aligned. Mr J accepts this opinion and the matter is resolved.

A hygienist sees a patient, Mr L, under direct access for a scale and polish. She notices a small red patch on the patient’s tongue and mentions this to him but does not discuss referral.

Three months later, Mr L returns and says he is concerned that the red patch has grown. The hygienist asks for his consent to allow a dentist colleague to assess the patch. The dentist makes an urgent oral medicine referral and Mr L is eventually diagnosed with squamous cell carcinoma, requiring tongue resection.

Mr L accuses the practice of negligence and says if he had been referred sooner, he would not have needed such invasive treatment.

MDDUS supports the hygienist and commissions an expert opinion on the effect of the referral delay. It is accepted that the delay did have an impact on the extent of treatment subsequently required and the claim is settled with the hygienist’s agreement.

A principal dentist refers a patient to an associate dentist for crown placement on a root-treated tooth. On assessing the tooth, the associate dentist identifies that there is a periapical area associated with the tooth and feels it wouldn’t be appropriate to place the crown without considering repeat root canal treatment.

The associate dentist discusses his concerns with the principal dentist, and it is agreed that they will explain the situation to the patient and discuss alternative options prior to proceeding with crown placement.

A therapist sees a patient, Ms K, under the prescription of a dentist. The dentist has prescribed a disto-occlusal filling under local anaesthetic at Ms K’s upper left premolar tooth (UL4) to treat caries.

On checking the bitewing radiographs, the therapist sees caries at UR4, but not at UL4. She raises this with the dentist, and it transpires a typing error had occurred. The dentist thanks her for raising the matter.

A new prescription for treatment is recorded by the dentist and the patient made aware.

A child patient needs two upper first premolar teeth extracted for orthodontic treatment. But when the referral letter from the orthodontist to the dentist is typed up, it mistakenly lists both upper lateral incisors for extraction. The orthodontist signs the letter without noticing.

The patient and his mother attend his dentist who follows the referral and extracts both upper lateral teeth. On returning to the orthodontist, the error is spotted. The patient’s mother is very angry and demands all necessary future treatment to correct the error is provided free of charge.

A dentist refers a patient to the dental hospital on an urgent pathway, but receives a critical return letter, chastising him for “unnecessarily” using this pathway.

The dentist is annoyed at the consultant’s tone and calls MDDUS for advice on how to respond. He says he had the patient’s best interests at heart when referring as he had been concerned about the appearance of a soft tissue lesion.

The MDDUS adviser suggests the dentist avoids sending an angry response and instead considers arranging a professional discussion with the consultant. The two clinicians eventually reach an understanding and the consultant apologises for the tone of her return correspondence.

A patient, Mr M, presents with advanced periodontal disease. The dentist discusses the possibility of referral to the dental hospital periodontal department but explains there is a long waiting list. Mr M agrees to the referral, but several months later he complains to the practice as he still hasn’t received a hospital appointment.

The dentist contacts MDDUS for advice. The adviser asks whether the dentist explained private referral pathways to the patient, in addition to those available on an NHS basis. She explains she did not. She discusses this option with Mr M, who is keen to be referred for a private specialist periodontal opinion.

The dentist ensures in future to discuss referral pathways available on both an NHS and private basis with all patients. 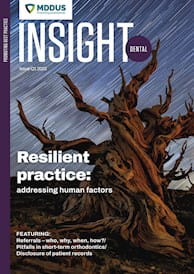 Professionalism: fulfilling your duties as a dentist