THE number of people who identify as transgender or gender variant in the UK is thought to be between 200,000 and 500,000, or about one per cent of the population.

This type of consultation is becoming increasingly common in practice and it is important that GPs are up-to-date with the relevant laws and professional guidance to ensure these patients are treated safely, sensitively and effectively.

The Government Equalities Office guidance, Trans people in the UK, defines trans as “a general term for people whose gender is different from the gender assigned to them at birth.” For example, a trans man is someone who transitioned/is transitioning from woman to man, and vice versa. Trans people, it explains, do not feel comfortable living as the gender they were born with and take “serious, life-changing steps to change their gender permanently.”

The Royal College of Psychiatrists (RCPsych) provides useful guidance on the assessment and treatment of trans patients, as does the General Medical Council’s (GMC) trans healthcare hub.

Doctors can feel out of their depth when dealing with patients with such complex needs. Consider the following scenario:

A quick flick through the notes before Jane arrived showed she had not seen a GP for several years. At 24 this was not unusual. When she came in she seemed anxious and began to explain that, for as long as she could remember, she had felt she was in the ‘wrong body’ and wished she had been born a boy. When she became depressed and anxious 18 months ago she started researching gender dysphoria on the internet. Then, last year, she decided she wanted to transition from female to male. She has now asked for her name to be changed in her medical records to James. She then admitted she started buying testosterone on the internet six months ago but is worried it’s unsafe and asked me to prescribe it for her. She also wanted to be referred for a bilateral mastectomy with a potential hysterectomy in the future. Most of all she wanted to talk about how she was feeling. I felt a bit out of my depth and was not sure where to start.

In a first consultation like this there is a lot of ground for our GP, Dr B, to cover. It is important to focus on establishing rapport, to check the patient’s clinical and mental wellbeing and offer support, referral and further appointments. The following information should help.

A patient has the right to ask for their medical records to be amended to reflect their preferred name, gender and title. There is no need to provide an updated birth certificate – a signed and dated request is sufficient. A gender recognition certificate (GRC) is not required.

Patients who wish to go further and change their full record can ask the practice to inform Practitioner Services Division (PSD) in Scotland or National Health Application and Infrastructure Services (NHAIS) in England. They will confirm the changes in writing to the patient, advising them to speak to the practice about the implications for their care.

It can take a lot of courage for a trans patient to come to the practice, so be empathetic and ask what they would like to be called. Amending records for trans patients can be complicated, both medically and legally. It may be advisable to seek MDDUS advice to avoid potential pitfalls.

It is important to emphasise that patients who ask for their gender to be changed on NHS computer systems (by PSD/NHAIS) will no longer be called automatically for national screening relating to their birth gender. In our scenario this means that James would no longer be called for cervical screening. If he does proceed with a hysterectomy he may still be left with a cervix, so Dr B must explain this and advise which screening tests would be appropriate.

For James, the practice should, with his consent, contact the National Screening Service and arrange for him to be invited to cervical screening. Where possible, arrange for reminders to be issued for future screening via the practice-based patient database. James should also be advised to make a note of when screening is due and to request this if he does not receive an automated reminder.

The Gender Recognition Act (2004) (currently under review) makes it an offence to disclose protected information acquired in an official capacity, for example the patient’s gender transition or previous gender. In terms of clinical referrals, this means GPs must not include such information without the patient’s consent. This is emphasised in the GMC’s guidance which states that seeking patients’ consent before disclosure of information “shows respect, and is part of good communication between doctors and patients”.

The GMC has helpful prescribing guidance in their trans healthcare hub. The key messages set out are:

In our scenario, James is not currently under the care of a gender identity clinic (GIC) and is asking Dr B to prescribe unlicensed medicines. The GMC advocates a harm-reduction approach in keeping with the RCPsych’s guidance which states that clinicians “may prescribe ‘bridging’ endocrine treatments as part of a holding and harm reduction strategy while the patient awaits specialised endocrinology or other gender identity treatment and/or confirmation of hormone prescription elsewhere or from patient records”.

It adds that a bridging prescription may be appropriate, provided blood tests and health checks are undertaken to screen for contraindications.

A bridging prescription may be issued until the patient can be seen in a GIC to prevent self harm, either due to mental illness or from purchasing unregulated drugs.

Doctors should only consider a bridging prescription in the following circumstances:

The best way for doctors to prescribe is through a shared-care approach with a gender specialist, however GIC waiting lists can be long. For James, it would be appropriate for Dr B to assess his mental state and offer to discuss his case with a gender specialist with a view to prescribing at a future visit. It would also be advised to discuss prescribing, and any other areas you are unsure about, with your GP trainer. 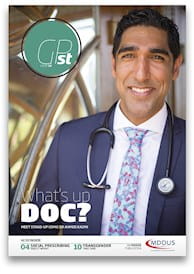