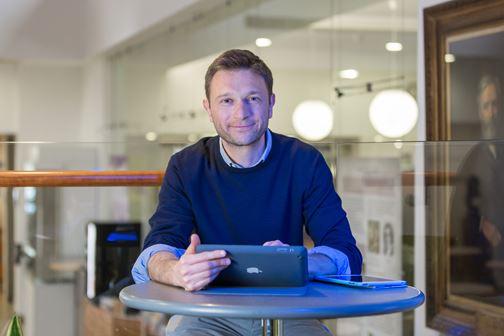 DENTIST Ben Underwood is at home looking after his newborn daughter who is just 10 weeks old. Although his first child, she is not his only ‘baby’ as Ben is the creator of award-winning dental app, Brush DJ.

As baby Hannah sleeps in his arms, the new father explains how the idea came to him while watching an episode of the hit BBC show The Apprentice. As Lord Alan Sugar challenged the candidates to develop an app, an idea was sparked in Ben’s mind.

The premise was simple: create an app to encourage good oral health using music as the hook to motivate tooth brushing for an effective length of time: and so Brush DJ was born. Fast-forward six years and it has been downloaded over a quarter-of-a-million times in almost 200 countries.

Achieving this success was not easy. It took six months of hard work and considerable personal financial investment – including recruiting a local app developer – to turn the idea into a reality.

Ben says: “Think of it like building a house – but not quite as expensive. There are a lot of things to consider and plan. Then once it’s built, it is a constant process of updating and improving based on user feedback.

“It’s the positive feedback that keeps me working away on it, because I am definitely not doing it for the money!”

The NHS generally takes an average of 17 years to bring an innovation into widespread use, but Brush DJ has defied the odds to become the first (and currently only) dental app to be accepted into the new NHS Digital Apps Library. Ben also has the backing of the Chief Dental Officer for England Sara Hurley and the British Dental Association (BDA), as well as having attracted NHS funding to further develop his app.

Proud of his achievement, Ben admits it has been harder work than he first thought: “Did I ever think about giving up on the app? Yes and no. All innovators go through what’s known as the ‘hype cycle’, where everything is very exciting in the beginning and expectations are high. But then they hit the ‘trough of disillusionment’ when you think ‘this is never going to scale’. There are many barriers to innovation in the NHS, but also some amazing people who will enable it.”

Available for both Apple and Android devices, Brush DJ has to date been downloaded more than 313,000 times worldwide and translated into 14 languages: “It is very exciting,” Ben says. “Tooth decay is not just a UK issue, it is a global problem and so it’s exciting the app is reaching people far and wide. But there is still a long way to go.”

He is passionate about his app and insists technology has an important part to play in modern dentistry. “People are spending so much time with their smartphones, using apps for everything from shopping and banking to social media and dating. If you are trying to engage people and grab their attention to promote evidence-based oral health, an app can help”.

In the dental surgery where Ben works as an associate, he sees tech-savvy children as young as four using mobile devices. It is those youngsters and their parents that he wants to target and motivate in a bid to get everyone brushing effectively. Seeing the first-hand impact of preventable tooth decay on his young patients inspired him to take action.

He explains: “Extractions due to tooth decay are the biggest reason children aged five to nine are admitted to hospital for a general anaesthetic (GA) – and this is for a preventable disease. Having a GA is traumatic and also incredibly expensive at around £1,000 per operation. This is money that could be better spent elsewhere in the health service.”

He recalls sitting in on a recent assessment session in which a two-year old child needed nearly all of her teeth extracted under GA. “It’s appalling,” he says. “Imagine how devastating that was going to be – not for the surgeon doing it or the parents, but for the child who will wake up in pain.

“We don‘t need to find a cure for toothache – we know the cause and the cure, and we know we can prevent it, but we have to get the message across in a way people will hear it and be motivated to act on it.”

Now a fellow of the NHS Innovation Accelerator (NIA) programme, which earned Ben a funding boost to further develop his app, he was among a handful of health professionals (and the only dentist) to be selected by the NHS to join the elite team two years ago.

Now in its third year, the programme has around 40 innovators, from sole traders like Ben to multinational companies like Boots who have inventions or the capability of developing their ideas.

And it really does ‘accelerate’, as Ben points out: “You can get a warmer reception when you knock on the door of someone high up in the NHS, rather than just turning up and telling someone ‘I have developed this...’.’”

As an NIA fellow he has both mentored and inspired other innovators. His advice to young or established dentists who are reading this and have an idea is to contact the Academic Health Science Network (AHSN) in England or Scottish Health Innovations Ltd (SHIL) who can provide help and support.

Just like raising a newborn baby, developing an app demands a lot of patience, time and money. It also requires continual nurturing. So how does a busy dentist balance his career with his app development, NHS Innovation Accelerator commitments and fatherhood? “I don’t watch much TV,” he laughs.

When he is not treating patients, trying to change behaviours and revolutionise modern dentistry, Ben enjoys running, cycling and gardening. “I think you need to regularly do sport of some description,” he says. “It helps both physically and mentally.”

When asked about his plans for the future, Ben says his immediate priority is Hannah. “The app was the first baby, now we have a physical one, which is going to be more expensive and time consuming, but she gives better cuddles!”