Practice profile: Medicine on the streets 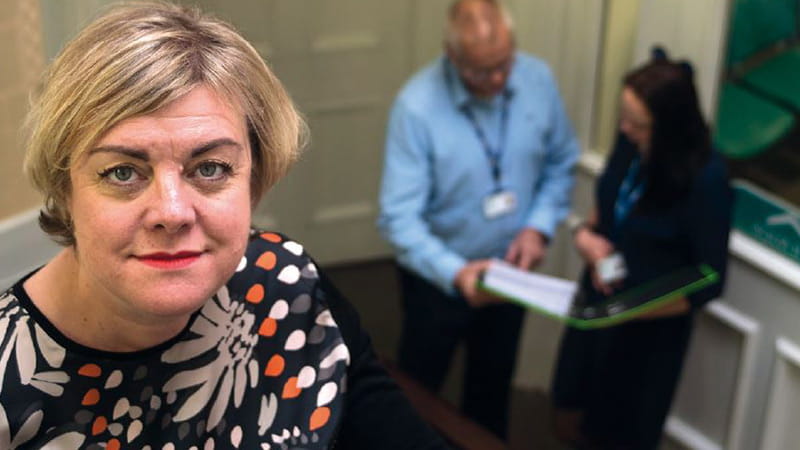 MIKE was living out on the streets of Bradford when he was first approached by the Street Medicine Team run by Bevan Healthcare CIC – a local primary care provider in the city.

“We could clearly see that he had a lot of problems but he wasn’t having anything to do with us,” says Gina Rowlands, managing director of Bevan and also a practising nurse.

“It took a considerable amount of going up and speaking to him to get some sort of engagement. Initially he wouldn’t say anything; then he started to tell us where to go! Then I actually asked him: what is it you really want? And he said: ‘I want a haircut’.”

So the practice organised for a support worker to take Mike (not his real name) along with £3.50 to a local barber.

“That’s all it took for him to engage,” says Gina. “He started to speak to the team. We built up trust – it was a mutual thing. Eventually he registered at the practice and started coming along. Things are not perfect for him but it was a huge step forward. And it was just something as simple as a haircut.”

Gina can tell many such stories from the more than 10 years she has worked at Bevan House. Recently I visited Bradford to chat with her about the unique and innovative primary care service the practice provides exclusively for local homeless people, those living in temporary or unstable accommodation, refugees and asylum seekers and others who have difficulty accessing healthcare.

In April of this year the Care Quality Commission awarded Bevan House an Outstanding rating in all five of its key lines of enquiry (KLOEs). Professor Steve Field, chief inspector of general practice said: “I had the benefit of being part of the inspection team and I can vouch personally for Bevan House. If there is a better practice in England I look forward to visiting it… This is an utterly outstanding practice and just shows what can be achieved with excellent leadership and teamwork which includes the team and the patients that this practice serves.”

Nobody dies of homelessness. People that are homeless die of often treatable medical conditions – which is just unacceptable.

Bevan House is located strategically in Bradford city centre in a bright, newly renovated Victorian building that would be the envy of many a GP surgery in the UK. The clinical team includes eight part-time GPs and two practice nurses, a vulnerable migrants nurse, a mental health nurse and a full-time health care assistant, supported by a team of administrative staff.

The practice is unique in a number of respects. It operates under an APMS (Alternative Provider Medical Services) contract which allows it to partner with other non-NHS bodies, such as voluntary or commercial providers to supply enhanced and additional primary medical services. Bevan Healthcare is also an independent community interest company (CIC) which is a type of social enterprise set up to use all profits and assets for the public good. This means the practice does not have partners; instead it has a board of non-executive directors with an executive management team.

“It’s a very inclusive model,” says Gina. “We are all salaried and any surplus we make at the end of the year goes back into the community. It’s also a really flexible model allowing us to bid for pots of money that probably regular NHS practices wouldn’t be able to do because of the way that they are structured.”

TAKING CARE TO THE PATIENT

Speaking with Gina it’s hard to keep up with all the local initiatives the practice is involved with – the Street Medicine Team being just one of the more high-profile schemes. This is a dedicated service that operates at food drop-ins, night shelters and emergency hostels, and on the streets, bringing healthcare directly to homeless patients or those with inadequate housing. The team runs a Street Medicine Bus in which patients can see a doctor or nurse in privacy.

“It’s a motorhome which we managed to purchase with a bit of money from the lottery and some of our own funds,” says Gina. “It’s dead kitsch, about 25 years old. At first people were a bit reluctant to get on it; they don’t like change. But it’s really quite cosy; it’s private and warm in the winter. There is a mental health worker who works with us; there’s also a housing worker. It just makes their lives a bit easier but it’s also about engagement, building trust to encourage them to come to the surgery and register which then opens up a whole host of services.”

The bus operates on a set timetable, parking in different parts of the city on different days. “We learned a long time ago by trial and error that where there’s food, there are our patients. So we go to a lot of the faith groups, churches that maybe run soup rooms or kitchens giving out meals.”

Bevan works in partnership with numerous such voluntary and local government organisations. “If we didn’t have those key relationships this model wouldn’t work,” says Gina.

One initiative that particularly impressed CQC inspectors was a service run by the practice along with a local social housing provider. The Bradford Respite and Intermediate Care Support Service (BRICSS) comprises a residential 14-bed temporary unit offering accommodation for homeless patients who require medical care after being discharged from hospital.

“It really helps get people back on their feet in terms of housing and addressing health needs. It gets them moved on to a better place,” says Gina. “But it’s also been successful in terms of helping some homeless people get access to palliative care. That’s probably one of the best aspects. It’s provided them with a dignified death.”

And death on the streets can be quick and untimely. The average age of death for a homeless woman is 42 and for a man it’s 48, compared to age 86 and 88 respectively for a pensioner in Chelsea.

“Nobody dies of homelessness,” says Gina. “People that are homeless die of often treatable medical conditions – which is just unacceptable.”

Gina began her career working as a secondary care nurse in A&E where she often dealt with homeless patients attending for basic care such as epilepsy medication or asthma inhalers – treatments that should have been accessed via primary care. This was one motivating factor in her joining Bevan in 2003 as a practice nurse.

“These patients are often called ‘hard-to-reach’ groups,” she says. “But I don’t think they’re hard to reach. I think it’s the completely wrong term to use. I think they are ‘easy-to-ignore’. They are often difficult to look after due to the chaotic nature of their lifestyles. They don’t often fit into mainstream services. They may not have telephones or mobile phones to make appointments. They often have other challenges in their lives and pressures that stop them turning up for an appointment. If you say to some of our patients we would like to see you next Wednesday at three o’clock. That’s absolutely setting them up to fail before they even get out the door.”

It was this ethos of truly patient-centred care that also impressed CQC inspectors and recently won Bevan an Innovators of the Year Award in the 2015 General Practice Awards. It is also embodied in the physical layout of Bevan House which has been designed as a one-stop shop, hosting benefits services, refugee support workers, rape crisis, legal, housing, midwifery and health visiting teams.

Says Gina: “We wanted to create a hub with tenants who are likeminded partners. We also knew that we wanted to open a health and well-being centre and really go for the social prescribing model which is important for our patients.”

Patients also play an important role in how the practice is managed. Bevan has a very active patient participation group and also an experts-by-experience group, which is a small cadre of volunteers including people who have had experience of homelessness or have come to Bradford as asylum seekers or refugees. It meets every eight weeks and offers an invaluable service user perspective.

Staff motivation at Bevan is high given the unrelenting nature of the work. Gina puts this down to a common sense of purpose and belief and buy-in to practice goals which are reflected in the motto: “health, hope, humanity”.

“We are not evangelical about the model here, but we do feel enormously proud of what we’ve achieved.”