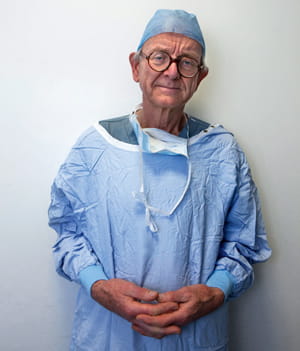 AT one point in his bestselling memoir, Do No Harm, Henry Marsh compares surgery on an aneurysm to bomb disposal work. One false move when you’re deep inside a patient’s head and the result is likely to be fatal. He concedes the flaw in the analogy – after all, it’s the patient’s life that’s at risk, not the surgeon’s. But it captures well for the reader the high-stakes nature of a neurosurgeon’s day-to-day work. The patient’s life is literally in their hands.

Marsh was describing an operation at which he was, in fact, a mere spectator. He was an SHO with 18 months under his belt since qualification. This was the first neurosurgical operation he’d ever seen. As he watched, the surgeon picked his way stealthily into the patient’s brain through a small opening in the side of her head, guided by an operating microscope, desperately trying not to disturb the aneurysm. Finally, he found it, clipped it and saved the woman’s life.

“It was basically an epiphany,” Marsh tells me, reminiscing about that day some four decades ago. “I knew immediately what I wanted to do.” He went home and told his wife he was going to become a neurosurgeon. In the book he describes it as love at first sight.

Now 68, he’s “retired” but remains as passionate about neurosurgery as ever. His work schedule says it all. “I do one day a week at St George’s, flexibly, mainly teaching, occasionally operating, also doing occasional outpatient clinics. I spend about two or three months a year working abroad, mainly in Nepal, but also Ukraine and Albania. I’m now also starting to work a bit in Pakistan,” he says.

He has also found time to write another memoir, Admissions, hot on the heels of the first, which was a runaway success. Both books are based on diaries he’s kept throughout his working life – he was a consultant neurosurgeon at St George’s from 1987 to 2015 – and both chart cases, thoughts and reflections of a lifetime in the operating theatre. They were never meant to see the light of day – “I’d have felt far too embarrassed”, he says – but his current wife, a writer herself, persuaded him the contents were worthy of publication.

TOO STRANGE TO UNDERSTAND

Marsh’s writing is expert and alluring as he describes the secret world beneath the skull, the shining surface of the brain, its lobes, the mass of blood vessels, the Sylvian fissure, the structures that should be there and the growths that shouldn’t. And you’re there beside him as he navigates his way deep inside it, cutting, coagulating and sucking as he goes. The sense of vertigo is acute as he describes, on the one hand, the physicality of what he’s seeing but notes, on the other: “The idea that my sucker is moving through thought itself, through emotion and reason, that memories, dreams and reflections should consist of jelly, is simply too strange to understand. All I can see in front of me is matter.”

There is also a searing honesty at work in these books, as you might expect from source material as personal as a diary. Yes, he writes of the successes he’s had – or at least “of the profound sense one gets of having avoided disaster”– but he also writes about the deep despair caused by many terrible failures, which have left patients paralysed and utterly dependent for the rest of their lives – what he calls, unflinchingly, a “wrecked patient”.

At one point he tells of a sense of intense relief when a patient who suffered a major stroke during an operation – rendering him unable to talk and unable to understand speech – later had a cardiac arrest and died, thereby avoiding a life of misery.

And he writes truthfully, too, about the very human aspects of the job. Of the thrill of a challenging operation, as well as its emotional flip side, the intense fear of making a mistake. Of the steeliness that’s required, which makes that fear work for you instead of against you. “That’s why I think most doctors don’t want to become surgeons, and most surgeons don’t want to become neurosurgeons, because the morbidity is so high,” Marsh tells me with a wry chuckle.

“It does require a sort of iron in the soul and that’s something you have to keep under control. And where you are on that spectrum between compassion and detachment depends on all sorts of factors – your personality, your age, your experience – and it varies over time.

He also talks about spats with colleagues and run-ins with hospital managers and this candour has won him plaudits the world over. “I think all of us are better off for being more honest and open,” he says. “I’ve got lots of nice emails and letters from doctors saying how helpful they found my writing. Because they realised problems they’d tortured themselves over were not unique to them.

“Also, medically we learn the most from our mistakes, and success is in a sense bad for us. It makes us complacent and that distorts our judgment. The important thing about mistakes is admitting you’ve made one. In that sense, there’s a strong onus on senior doctors to set an example of being honest.”

Marsh shines this light of honesty on his personal life too and describes the disastrous end to his first marriage. And long before that, at 21, there was the unrequited passion for an older woman that led him to run away from Oxford University, where he was studying politics, philosophy and economics. He went off to a mining town in the north of England and there worked as a hospital porter and wrote “second-rate, self-obsessed poetry”. A manic crisis followed and he had a brief spell in a psychiatric hospital, followed by weekly visits to a psychiatrist.

It’s a period he describes in some detail in both his books, almost as if he treasures it. “I sort of do,” he admits. “I’m embarrassed by it in some ways but it was very educational. We learn most from mistakes. We learn more from difficulty than from comfort and ease. I’m not a great fan of Nietzsche but, as he says, ‘What does not kill me makes me stronger’.”

It was an unhappy time – matched only by a year as a boarder at Westminster School when he was 13 – but the result was indeed lifechanging because, having witnessed surgeons working up close, he began to get excited about the possibility of studying medicine.

After a year away, Oxford agreed to take him back and he finished his degree before being accepted at the Royal Free. It would be another few years before he witnessed that first aneurysm operation, the one that led him to opt for neurosurgery in the first place, but his future path was set.

Now, at the other end of his career, with two well-received memoirs under his belt and a third one under contract, Marsh has added celebrated writer to his impressive CV. On the surgical front, he has cut the number of operations from a peak of around 500 a year to just 12. He recently operated on a petroclival meningioma and was happy with the outcome. “I think I’ve still got it,” he says. “But I’ll have to stop at some point and it’s best to stop too early rather than too late. I have to step aside for the next generation.”

In the meantime he’s got plenty of experience to pass on to that generation and teaching is a big part of what he does. Having worked at both the bottom and the top of the medical world, there’s one piece of advice he often gives. “I always say, working in a menial role in a hospital is valuable experience. It gives you much greater insight into what a hospital’s really like for patients and other members of staff than if you just go straight from school to medical school and become a sort of vain, self-important doctor.”

So does he feel those early experiences kept him grounded? “Well, I hope so.” He laughs suddenly. “You’d have to ask people who worked with me years ago whether I was grounded – or whether this shows a total lack of insight on my part!”