Book choice: Many different kinds of love - A story of life, death and the NHS 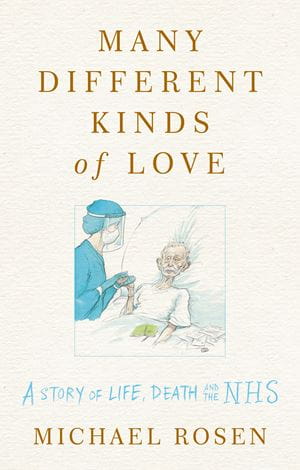 It's something they say about me.

Every so often a doctor or nurse

stands by my bed and says,

‘You were very poorly.’

I'm starting to expect it.

I get the feeling that some people

who were very poorly, died.

This is how Michael Rosen describes his recognition that he had survived Covid-19. The previous Children’s Laureate was admitted to hospital in late March 2020 with coronavirus, and only discharged months later (his admission included six weeks in an induced coma: I am getting it that / there is a place between life and death. / I was there for weeks.).

The book is captivating from the start. Rosen is soon admitted to ITU.

A doctor is standing by my bed

asking me if I would sign a piece of paper

which would allow them to put me to sleep

and pump air into my lungs.

We learn about Rosen’s turbulent stay in the ITU through the entries made in a diary by those caring for him. We then relive Rosen’s delirious confusion as he tries to make sense of his skeletal body, his reduced senses (I left some things down there. / It took bits of me as a prisoner: / an ear and an eye), the virus that caused this (Tiny viruses with enormous brains / I’ve looked at pictures of it: blue and spiky. / In my mind it’s become a wicked hedgehog), the “fog”, the “blur”, the helplessness.

Rosen’s story is so real. It is so personal. He remembers dreaming of the tracheostomy tube as “a piece of penne pasta”. He recalls his altered perceptions, including his skin feeling like sand (I’m growing sand on my skin) and the nasogastric tube sticking up my nose. / Or out of my nose (It could be a worm. / Or a slug.) And he shares the full scope of emotion as he moves closer to home.

His humour is subtle and touching. He tells us about the nurse who seemed cross when his nasogastric tube falls out (She asks me why I pulled the tube out of my nose. / I say I didn’t pull it out of my nose, / it came out). The nurse replaces the tube. In the morning / The doctor comes round / And says it's time to take out the tube.

He describes another nurse who consoles him when, delirious in ITU, he tries to remove his mittens:

She says, Relax, lie back and

She says the word ‘Energy’

as if it is something sacred. ‘

Lie down and move up the bed,’ she says

‘your feet are touching the end of the bed.’

I say, ‘My feet are touching the end of the bed

because the bed is too small.’ ‘

Crocs were an essential part of Rosen’s rehabilitation attire. He gives the reader a clothing tip: if you drop a blob of hummus by mistake / on your crocs, / make sure / that it doesn’t land on one of the holes.

Rosen, who in 2008 compiled These are the hands for the 60th anniversary of the NHS, cannot hide his admiration for those who saved his life and are dedicated to caring for others (I try to fathom this devotion). He does not shy away from contentious issues. He feels “hot and angry” that the lockdown came too late. He tries to make sense of nay-sayers: There are people / on the internet / trying to tell me that / I'm a hoax, or I've been hoaxed / or I'm part of a plot or / I've been plotted against.

Many different kinds of love is a beautifully written story that celebrates the “indomitable spirits of the people that keep us well.”

Acting as a witness

This module is aimed at doctors and takes around 45 minutes to complete. It includes a short assessment at the end.

When consent becomes difficult - a masterclass for doctors

This two-hour, interactive course is suitable for all doctors and physician assistants.