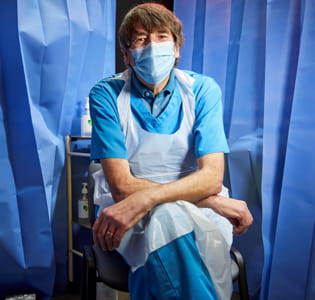 SPEAKING about Covid-19, Clive Barker likes to quote his favourite satirical magazine, Private Eye, which has noted an unprecedented use of the word “unprecedented”.

Certainly the 61-year-old retired GP never expected to be dressed again in scrubs and mask, reassuring patients before jabbing needles in their arms. But this is what he has been doing since January, inside a temporary marquee at the Ryan Medical Centre in Bamber Bridge near Preston.

He works as a volunteer a few sessions a week at the vaccination clinic, which is run by the Bridgedale Primary Care Network.

“Patients come in one end of the marquee and discuss any concerns with a clinician, and are consented,” says Clive. “They then move down to one of three booths for the vaccination. It’s a one-way system and patients are guided by volunteers from the local community. The lady I was working with on Tuesday was a retired university admissions officer. There are also volunteers making nice warming cups of tea because it does get a bit cool, even with the heaters.”

The atmosphere at the centre is nothing other than positive, says Clive. “Patients really want to be there. In fact they are ever so grateful; it’s humbling. There’s a really good vibe and the time goes very quickly.”

The work Clive does is unpaid, which for him was a precondition for becoming a vaccinator. “I’ve been very lucky with my NHS career. I’ve been well paid and I’m on a good NHS pension. I would want any money to go back into the NHS or to people who need it more than I do.”

What compelled him to volunteer in the first place?

“I felt I had a moral duty to do it,” says Clive. “Seeing what was going on with exhausted colleagues in both primary care and in hospitals, I felt if I could do something that meant that they would be free to get on with their other good work then I should do it. Being able to help the community again is a real privilege.”

Clive worked for 31 years as a GP before retiring in 2017. He was a full time partner in a seven-GP practice in Chorley, a semi-rural market town about 40 miles northwest of Manchester.

“I enjoyed general practice tremendously but was finding it increasingly hard work. I don’t mind hard work but I was often doing 13-hour days, 60-plus hour weeks. I felt I wanted to finish while I was still well enough to practise – what I hoped to think was – very good medicine.”

Clive had developed some health problems and decided it was a good point to take life at a “more sane pace”. He continued doing some occasional teaching sessions, mainly in communication skills with undergraduates and foundation year doctors, but finished work completely in mid-2019.

“It was strange not working to the same degree but great to spend time with my wife and travel and exercise more. I ran the London Marathon in 2019 at the age of 60. Friends and colleagues and former patients kindly sponsored me on behalf of the Motor Neurone Disease Association, which my mum died from some years ago.”

In March 2020, Clive and his wife had just put their house on the market when lockdown was announced (the move to be closer to family would not be completed until December). A letter arrived from the GMC announcing that all doctors who had "retired in good standing" in the previous three years were being granted free registration and a licence to practise in order to assist with the pandemic.

Clive knew immediately that he wanted to help out. He first volunteered with the Covid Clinical Assessment Service (CCAS) and undertook training modules in the software to work for NHS 111 using his home phone. But in the end he decided this wasn’t the role for him.

“I got quite a long way down the line there but for me personally the clinical IT back-up was not something I felt confident with. The idea of being in my study at home on the phone to somebody say in Cornwall whose history I don’t know and where I don’t know the local services, and advising them about their possible coronavirus symptoms and then losing the call or getting cut off – that would have worried me greatly.”

Later between lockdowns Clive was out walking with a friend who was clinical director at Bridgedale PCN, which was then organising a local vaccination clinic. Clive asked about helping out and a senior administrator for the network later emailed him detailing the process of enrolling as a volunteer vaccinator. He was asked to complete a series of online modules via e-Learning for Healthcare (e-LfH). Topics included core knowledge in Covid-19 vaccination, vaccine administration, vaccine storage, management of anaphylaxis and adult basic life support.

“I did nine modules, all of which I think were very relevant. The whole lot must have taken around 12 hours.”

In addition Clive consulted Public Health England’s ‘Green Book’ on immunisation against infectious disease and the online COVID-19: vaccinator competency assessment tool. He also had to register with the Disclosure and Barring Service (DBS).

“I would say to anybody, don’t let all this put you off. I know when all is said and done, you’re just giving an intramuscular injection of a vaccine which most GPs will have done thousands of times – well at least in their early careers.”

Did he worry about the risks of being involved in the mass vaccination programme?

“Not at all, because the benefits to the community hugely outweigh any personal risk and I think everybody else in there feels the same,” says Clive. “We are wearing masks; we are aware of the guidelines. My family were very supportive about the decision to go back.”

Clive has been vaccinated along with other essential healthcare staff.

“I can see the immunisation programme going on for most of this year at least, and I would imagine I will do perhaps two or three sessions a week for as long as I’m needed.”

Could have done better

Clive is obviously proud of the work he and his healthcare colleagues are undertaking to help get the nation back to normality, but he is somewhat critical of the way the pandemic has been handled.

“I’m not particularly political but I don’t think the NHS was adequately prepared. After a decade of relative underfunding of health and social care, we were vulnerable – particularly with the public health role having been diminished along with the number of hospital beds.

“Some aspects of the government’s response to the pandemic could have been better. Nobody was going to get it right first time but, really, giving contracts to private contractors, many of them with no real experience of healthcare. I think that’s a worry. One of the reasons the vaccination service has done so well is because it’s been entrusted to the NHS.”

Speaking again of all that is “unprecedented”, Clive does believe general practice will never be the same after Covid-19.

“I think there will be a significantly lower proportion of face-to-face consultations and more phone and video consultations in future. I think for young patients that’s probably fine but the older population may have difficulties.

“To be fair, primary care has been incredibly adaptable and I am so proud of my colleagues who are still in there, full time, adjusting to this new way of working.”