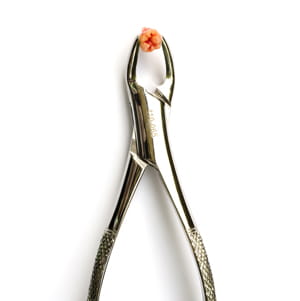 BACKGROUND: Mr P contacts the dental surgery to make an appointment with his regular dentist – Mr T. A tooth is causing him considerable pain and he asks to be fitted in that day if possible. The receptionist informs the patient that there is no appointment available for Mr T but that he can see Mr V who is working as a locum at the practice.

The patient complains that the pain is in the upper left quadrant and Mr V examines UL5 and finds it very tender on percussion. The tooth has a large restoration and Grade 1 mobility. The adjacent tooth UL4 is also slightly tender but UL6 is fine.

The dentist diagnoses irreversible pulpitis in UL5. Mr P is adamant that he wants the tooth extracted as the pain is “unbearable”. Confirming the patient’s consent the dentist administers a local anaesthetic and extracts the tooth. Post-operative instructions are given to the patient who leaves satisfied.

An hour later the patient returns to the surgery and complains to the receptionist that he is now convinced that the wrong tooth has been extracted. Mr V sees the patient again immediately and also summons the senior partner in the practice. The senior dentist reassures the patient that Mr V has extracted the tooth he believes was causing the pain. He arranges for the patient to return for a review appointment.

The patient returns to the surgery now complaining of sharp pain in the remaining UL4. His regular dentist Mr T finds it to be moderately tender to percussion and extracts the tooth. A review appointment to discuss the provision of a denture is arranged.

A letter of complaint arrives at the practice from the patient expressing anger over his treatment. He states that the tooth which should have been removed at the first consultation – UL4 – had been the subject of ongoing treatment with his regular dentist Mr T. A few months previous he had attended for the removal of a fractured cusp with the remainder of the tooth being filled. Later the tooth grew painful and Mr T prescribed an antibiotic and suggested it may need to be extracted. This was the state of affairs when the patient attended Mr V.

The patient also disputes the contention that he spoke to Mr V simply of pain in his upper jaw – but rather he states that he pointed out with his finger the “offending tooth”. He states that the tenderness he felt with “tapping” on UL5 was simply due to its close proximity with the infected UL4. He expresses surprise that his dental records would not provide Mr V a clear indication of the tooth under ongoing treatment and wonders if the dentist had even consulted the records prior to the examination and treatment.

In his reply to the patient’s letter Mr V states again it was his clinical opinion that UL5 had irreversible pulpitis and required extraction to which the patient agreed. The subsequent extraction of UL4 had no bearing on his diagnosis and treatment. He apologises for the distress caused to the patient.

ANALYSIS/OUTCOME: Two months later another letter arrives from the patient in which he states his intention to contact a solicitor in regard to the “negligent treatment” he received by Mr V. Mr T contacts MDDUS for advice and in discussion it is agreed that there is no denying that Mr V extracted the wrong tooth and that nothing can mitigate the fact that the problems with UL4 had been clearly documented in the patient notes.

To remedy the complaint the practice partners agree to refer the patient for restorative treatment. A single implant is placed with a cantilever bridge restoration and the patient is satisfied with the final result.