Mr Z attends the dental surgery with a history of pain in a lower right tooth (LR6), especially on biting and chewing. The tooth had been filled two years previous. The dentist – Ms J – takes X-rays and notes irreversible pulpitis due to infection. She discusses options with the patient: root treatment or extraction. Mr Z opts for root canal treatment and an appointment is made for two weeks’ time. The dentist also prescribes an antibiotic to reduce infection and ease the pain.

Mr Z attends for root canal treatment on LR6. Pre-treatment X-rays are taken and Ms J administers a local anaesthetic. She proceeds to remove the MOD restoration and then the pulp using a barbed broach. Next she employs a lentulo spiral filler to spin Ledermix into the canal. The instrument fractures and part of it is retained in the canal. Ms J uses another spiral filler to try to remove the fragment but this is unsuccessful. She then abandons the procedure and the tooth is dressed with sedanol. A second radiograph is taken confirming the presence of the fractured instrument and Ms J informs the patient (though this is later disputed). Mr Z is given another prescription for antibiotics and an appointment is made for him in a week’s time.

A second attempt is made to remove the fractured instrument from the canal but this is again unsuccessful. The patient later alleges that Ms J told her that there should be no problem leaving the broken instrument in the tooth as it is sterile. She places an MOD amalgam restoration in the tooth and tells Mr Z she will refer him to the dental hospital if there is persistent pain.

Mr Z returns to the surgery complaining of discomfort though not severe pain in the tooth. Ms J makes a routine, nonurgent referral which is sent by post but not received at the dental hospital.

Two months on from his last appointment Mr Z phones the dental surgery to say he has not heard from the dental hospital. He is now suffering persistent pain in LR6 so Ms J re-refers and an urgent appointment is arranged. Mr Z attends the dental hospital and is treated by Dr K who removes the amalgam filling and locates the fractured instrument but fails to remove it. A second attempt is made one month later but also fails. The only remaining option is extraction of the tooth.

THREE months later Ms J receives a letter of claim from solicitors acting on behalf of Mr Z alleging clinical negligence in the treatment of his tooth. A report has been produced by a restorative dentist that is critical of Ms J’s treatment of the patient. MDDUS advisers and solicitors review the report and all associated correspondence along with the patient records.

It transpires that Ms J’s record keeping is very poor. There are no written treatment plans or references in the notes to the radiographs taken. No note can be found to refute Mr Z’s claim that he was not informed of the instrument failure until a follow-up appointment. The expert is also critical of the dentist’s suggestion that the tooth would be okay because the instrument had been sterile.

Further discussion with Ms J regarding the paucity of notes also reveals that she did not use an apex locator to estimate working length. There is no record of use of rubber dam or any instrumentation or irrigation prior to the use of the spiral filler. This casts doubt on the actual standard of root canal treatment.

Considering these weaknesses it is agreed that the claim would be better settled. An amount is negotiated based on the cost of a single implant.

• Ensure that full and complete contemporaneous records are kept of treatment plans and discussions with patients.

• Memory cannot be relied upon in legal defence.

• Be open and up-front with patients when complications occur. 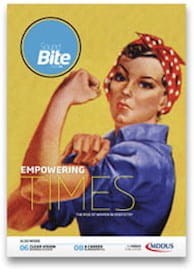