Sports dentist Fiona Davidson talks about the challenges of caring for the Scottish International Rugby squad.

RELUCTANCE to visit the dentist isn’t confined to the timorous.

In fact some of our greatest exponents of brute force and raw courage have been dragging their feet when they should have been knocking on the surgery door.

That was Fiona Davidson’s discovery when she was appointed official dentist to the Scottish International Rugby squad six years ago.

“Compared to the general population they are nearly all terrified of needles,” says Fiona.

“It is a bit of a standing joke, considering the collisions they get involved in on the pitch. They are all terrified of me. It is quite amazing.”

Perhaps her biggest challenge came when one of the largest members of the Scotland squad needed to have a wisdom tooth extracted before a major tournament.

“He is a huge guy, and we were terrified he was going to faint,” she says. “We had to give him three times the usual dose of local anaesthetic. I have never given anyone that much. I didn’t worry because he was huge – half the weight again of a normal person, and solid muscle. We still joke about it every time I meet him, and the story gets more elaborate every time he tells it.

“The interesting thing is that they don’t like dental treatment – the main problem is having the needle. Maybe it is a phobia that has developed because they have to undergo stitching very quickly if they come off the pitch injured.

“There is a lot of banter about it in the squad. I always enjoy that. They take every opportunity to kid each other on – I think it is an attempt to get over their own fears.”

Initially taken on to provide emergency cover for international matches, Fiona has grown her role in Scottish rugby to ensure that players have regular screening and that problems are tackled before they become a threat to their game. She has also developed a strong sporting dimension to her SmilePlus Dentalcare practice in Edinburgh.

Fiona’s active involvement with rugby began in 2007 when she was approached by James Robson, Medical Director of the Scottish Rugby Union and the British and Irish Lions. “I had been recommended by a patient who works for Scottish Rugby,” she says.

She was an experienced dentist, having qualified in 1986 from the Royal London Hospital where she worked up to SHO level in Oral Surgery. But Fiona felt the need to raise her own game and attended a Certificate in Sports Dentistry course at the Eastman Dental Hospital in London from 2008-09.

The scope of the work before her quickly became apparent shortly before the start of the Six Nations, when three senior Scotland players presented with severe dental problems that had the potential to flare up during overseas travel.

“My view was we had to prevent problems from arising at the wrong time,” says Fiona. “For example if an athlete comes in with a problem wisdom tooth, and we anticipate they could suffer from infection at an awkward time, we would plan for an early extraction, rather than treating with antibiotics beforehand, as we would with other patients.”

A series of questionnaires sent out to the team about their dental health confirmed her fears that young men tended to leave home and forget to go to the dentist, in some cases for 10 years. So Fiona set up a screening programme which involves thorough 30-minute examinations every four years.

This paid off before the 2011 World Cup in New Zealand when Fiona found that, of the 38 members of the squad, seven had urgent dental problems. Another 24 required more routine treatment ranging from scale and polish to chronic abcesses.

“We had to make sure they were all dentally fit,” she says. “Severe dental problems such as chronic abcesses or caries may well have caused problems when they were travelling.”

Wisdom teeth, she points out, are a very common problem in young people in their late teens and twenties. Teeth partially erupting through the gum can easily become infected causing pain, swelling and fever. Fortunately none of the players had any problems on the tour, however other members of the party weren’t so lucky. Some of the coaching staff and players’ wives who had joined the New Zealand tour suffered dental problems of their own.

She still provides match cover at Murrayfield internationals – no hardship, since she has been an avid fan of the sport since her days at the Royal London – and she and a colleague share cover at matches involving Edinburgh Rugby and Glasgow Warriors.

They are all nice lads, she says, and their relationship may have something to do with the fact that, at 50, she is the same age as most of their mothers. Indeed, Fiona is in some ways picking up where their parents left off.

“Young men are probably the worst at keeping up with dental treatment,” she says. “When they were young their mothers would have taken them to the dentist every six months but when they leave home they forget about that.”

For her part, she admits: “When I first met some of the senior Scotland players I was quite awe-struck. I really enjoy watching the young ones starting off and developing through international rugby. It is lovely seeing them getting their first cap.”

One of her most unusual assignments to date has been creating a trophy for Edinburgh Rugby using the legendary cauliflower ear of Alan “Chunk” Jacobsen, who retired this year after a career spanning 285 games for Edinburgh and 65 for Scotland.

It began as an attempt to protect the ear from further punishment by covering it in dental putty to keep it from swelling up if it took a knock on the field.

“When that happens the ear swells with blood and if the blood isn’t drained off it hardens and you are left with the cauliflower ear,” Fiona explained.

Instead of sending Chunk back on with a big lump of putty held in place by a bandage, she took a mould and made a neater, close fitting version which stayed in place without a bandage.

“We mounted the mould and they are going to have one made in silver as a club trophy.”

The first winner of the trophy will, fittingly, be “Chunk” himself.

Now Fiona has another target in her sight, and is again meeting the challenge by broadening her education. As a dentist she has grown increasingly concerned at the effect sugary drinks and snacks have on athletes’ teeth.

“I want to question why athletes need to take such sugary drinks and snacks. That is where their diet falls down,” she says. She admits that, where athletes are concerned, finding a substitute might not be easy. “I don’t recommend isotonic or sports drinks to the general public, but athletes may have to take in 3,000-4,000 calories a day and it is difficult to absorb all that in food. But the result is we see damage caused to teeth by high acid and sugar.”

So Fiona has become the first dentist to enrol on an online diploma course on sports nutrition run by the International Olympics Committee in order to find out about athletes’ need for sports drinks.

“It is a subject that is outside my comfort zone. I need to understand the nutritional aspect,” she said. “I don’t know if we can stop them using these drinks – it is a question of working out ways to minimise the damage.”

Also high up Fiona’s agenda is next year’s Commonwealth Games in Glasgow, in which she hopes to play an active part. SmilePlus were represented at the London Olympics by technician Paulina Ciecielag, who provided a mouthguard service.

“The challenges there were less to do with sports injuries than with athletes coming from developing countries requiring actual dentistry,” says Fiona.

“It was a case of offering people treatment that might not be available back home. Sports medicine is about the prevention of injury but dental health generally can also affect performance. The Games are an opportunity for athletes to catch up with treatment that they might not otherwise have got.”

Alan MacDermid is a freelance journalist 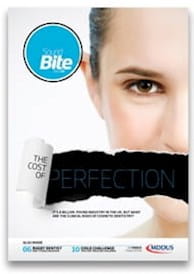