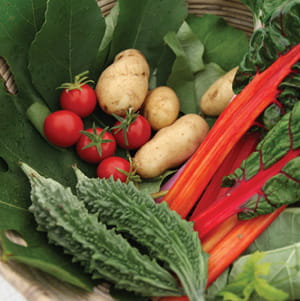 GROWING vegetables is not within the usual scope of a general practice, so when NHS educator Ed Rosen approached a group of clinicians with his "gardening for health" idea, he was met with some scepticism. However, six years (and one Royal visit) later, his ground-breaking food cooperative project is flourishing.

Today, 15 gardens have been created in the grounds of doctors’ surgeries across the South London borough of Lambeth, growing everything from beetroot and mushrooms to herbs and potatoes. In these green spaces, patients and healthcare teams come together to cultivate crops as well as relationships.

Alongside the more obvious practical lessons on gardening and healthy eating, the project has provided a lifeline for those affected by loneliness, depression, anxiety and chronic conditions such as diabetes and arthritis.

Ed, a self-confessed "novice gardener", is the director and driving force behind the Lambeth GP Food Co-op (LGPFC). So far the project has engaged with more than 400 patients, many of whom suffer from multiple long-term conditions and who live in high-rise tower blocks with no access to green spaces. The gardens provide an ideal, informal setting to highlight the importance of eating well and to offer nutritional advice.

Ed says: "Dieticians and nutritionists from St Thomas' Hospital and Kings have come out, rolled their sleeves up and planted alongside patients. In doing so, they have spoken to patients about the nutritional value of what they are planting. They are low-key health conversations whilst they are collaborating in planting courgettes or pumpkins. 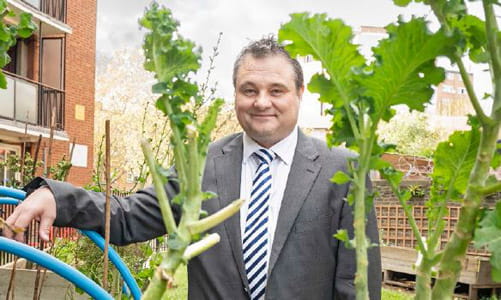 One local GP surgery actively involved in the food co-op is The Grantham Practice, which has a list of around 10,000 patients with over 60 ethnicities. Jonathan Wilmshurst (pictured) is the former practice manager and now patient liaison at Grantham.

"Our practice decided to do this not really knowing how popular it would be," says Jonathan. "We started out with just two planters at the back of the surgery and that turned into six and then we moved to a bigger site and it’s just grown from there really.

"What we’ve found is that patients who have taken part visit their doctor less. If they don’t get out much and they’re quite lonely, it gives them the opportunity to mingle and create friendships as well as a little community. And that’s a good thing. Not everything can be sorted out in the four walls of a consulting room."

Indeed, Lambeth food co-operative is something of a pioneer in the movement towards more widespread 'social prescribing' (where clinicians direct patients to a variety of cultural and community activities to improve quality of life). The initiative was established well before the UK government unveiled its "loneliness strategy" in 2018, which called on GPs to engage in more social prescribing.

And as Lambeth’s co-op goes from strength to strength, other healthcare providers are taking note. A food garden has been built at the Pulross Centre in Brixton, a 20-bed unit which cares for patients with MS and who have suffered from stroke and other conditions.

However, at present, the volumes required to make this happen are just too high, as Ed explains: "If we were able to grow one tonne of mushrooms they would buy the whole crop and make mushroom soup for staff and patients. It’s not that far down the line but it requires a slightly different model of growing compared to what we have at the moment. I can’t ask people who are not well to work their socks off, but we are looking at new technology for growing at scale. I think over the next five years, if we get the investment, we can do this.

The Lambeth co-op has also published its first recipe book (available via its website for £7), with a second due to be published in time for Christmas. It features a selection of healthy recipes submitted by patients, GPs and nurses, including red onion marmalade, spring green miso noodle soup and roasted butternut squash.

He says: "I would say to them 'would you like to make a financial contribution?'! No, seriously, I would invite them along. We have demonstrated that the concerns, reservations and anxieties were not grounded in the reality of developing the project. It is possible to do it and it works. It may not cure cancers but it improves the lives of some of the most vulnerable people in our communities."

Support for the food co-op comes from many different areas and is increasingly high profile. GP and media doctor Jonty Heaversedge, London regional medical director for primary care and digital transformation, has spoken of the positive impact the project is having on patients. He says: " The Lambeth GP gardens help people feel less isolated and improve the health of local people living with long term conditions across the borough."

Aidan Cleasby, Trust community facilities lead for Guy’s and St Thomas’ adds his support, saying: "Patients can get outside, particularly in the spring and summer months, to plant, water and prune the plants, which is much more stimulating than sitting on a hospital ward. This complements their recovery process and enhances their wellbeing. 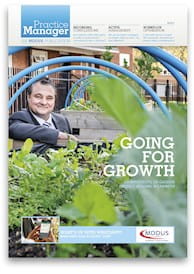