More random items of questionable relevance from the PM team...

MOST DENTISTS LOVE LIONS  Diary truly despairs of the state of things when a successful dentist is pilloried for exercising his right to travel the globe and commune with exotic wildlife down the sights of a high-powered hunting rifle. Such now is the sad reality for American dentist and big-game hunter Walter Palmer after “mistakenly” targeting much-loved Cecil the lion. Even members of his own profession are distancing themselves and this includes staff at Bloomsbury Dental Practice. A patient recently contacted customer care manager Christopher Hall to ask whether all dentists are like Walter Palmer. He replied: “No they are not!” Chris then spoke to his own dentists who were “quite shocked that people might think that”. So he contacted the Born Free Foundation and the practice has now adopted three African lions just to prove it.

STAR-CROSSED CARE Could the answer to the overuse of antibiotics lie in the ancient practice of astrology? Conservative MP for Bosworth David Tredinnick seems to think so. A supporter of complementary and alternative therapies, he was quoted in Pulse suggesting it could “certainly” be useful to GPs and could also help reduce the cost of the NHS as a whole. A keen student of the stars himself, the MP said astrology could help patients understand which pending health issues they should look out for. The signs of the Zodiac, he explained, have been associated with different ailments – Capricorn with knee issues, Aries the head and Pisces the feet. “Some people because of their astrological make-up would be more susceptible to some ailments than others,” he said. “It has been used for 3,000 years… and we need to be a bit more broadminded.”

LIVERPOOL, KNOW THYSELF Practices in Liverpool will no doubt be delighted to hear that the city leads the country in online self-diagnosis. Video service Push Doctor accessed data from 61 million UK internet searches for 160 leading health issues. It found that the trend for self-diagnosis has risen 19 per cent over the last year (with an average of an extra 848,000 searches each month). The share of health searches was highest in Liverpool (5.99 per cent), Cardiff (5.86 per cent) and Surrey (5.74 per cent). Fewest clicks on medical issues were in Hertfordshire (0.94 per cent), Milton Keynes (0.72 per cent) and York (0.64 per cent). Among other curious trends was that back pain and depression were the most searched for topics in Liverpool whereas in Shropshire it was diarrhoea. Go figure.

PRE-MORTEM Diary recently nodded off at the desk and had a nightmare that we consulted the Ubble UK Longevity Explorer only to discover we are already dead. How welcome it was to awake Scrooge-like and realise there is still time to make a change. This apparently is a key motivation behind the development of the online tool which uses self-reported information to generate a score that predicts the risk of death within the next five years for UK people aged 40 to 70. It is based on research from the Karolinska Institutet utilising health data from nearly half a million adults held in the UK Biobank. Researcher Dr Andrea Ganna said: “Of course, the score has a degree of uncertainty and shouldn't be seen as a deterministic prediction. For most people, a high risk of dying in the next five years can be reduced by increased physical activity, smoking cessation, and a healthy diet." Diary will honour these resolutions in our heart and try to keep them all the year!

EXTREME MEASURES Diary isn’t certain whether a topless shot of health minister and GP Dan Poulter will help or hinder efforts to boost exercise uptake among the general population, but we can only applaud his bravery. Earlier this year he announced that he (and two fellow MPs) had accepted an eight-week fitness challenge from Men’s Health magazine in a bid to prove that even busy people have time to exercise. Two months of calorie controls and work with a personal trainer left the Tory politician 2.5kg lighter while his body fat dropped from 24 per cent to 18 per cent. Dr Poulter and his colleagues showed off the results of their labour with topless before and after shots in the magazine, whose editorial declared: “If they can juggle work and fitness, you sure as hell can too.”

RE: YOUR CANCER  Some doctors can be reluctant to break bad news to patients – but in Oxford it may be far better for GPs to grasp the nettle. John Radcliffe Hospital is reported to be introducing a strategy where hospital administrators will inform patients they may have cancer if GPs have been less than explicit when using the two-week urgent referral pathway. This is to prevent patients from cancelling appointments or investigations for “trivial” reasons such as going on holiday. Oxfordshire LMCs’ chief executive Dr Paul Roblin said: “I do sympathise with both sides, GPs need to play their part in informing patients, but the John Radcliffe has to deal with patients in a sensitive way.”

FREE-FALL BURDEN Diary has learned that the recent HEE recruitment campaign featuring a GP providing routine skydiving consent for a patient has sparked reports from dozens of surgeries overrun with parachutists. One PM said: “Just last week our waiting room was stowed out. They turn up in their orange suits and demand emergency appointments. My staff can no longer cope.” Another GP commented: “Sure. It’s exciting for them but an administrative nightmare for us. No doubt there will soon be calls for a 7-day parachutist consent service.” 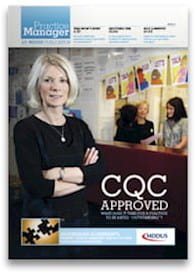