A BRIGHT afternoon in mid-September – cars line both sides of Caithness Street in the Maryhill district of Glasgow. Traffic is down to one lane. A mob of student helpers in pink t-shirts unload suitcases and trunks from tightly packed boots and backseats. Parents clutch registration papers and argue with teenage daughters and sons – no one exactly sure where to go among the rows of three-story brick housing blocks. This is Murano Street Student Village and it’s the start of freshers week at the University of Glasgow.

Over the next month these young students must quickly adjust to life away from home – making new friends, cooking, doing laundry, balancing academic work with the temptation of countless parties and two-for-one club nights. Among all this activity many will also register for medical care.

Kim McWilliams is practice manager at the Barclay Medical Practice which runs the University medical centre located in the Fraser Building – a bright and airy office block in the heart of the main campus. Glasgow is one of the oldest universities in Britain, being founded in 1451, and it boasts an enrolment of around 25,000 undergraduate and postgraduate students from over 120 different countries. The practice staff at the medical centre look after the primary care needs of 15,000 to 16,000 of these students.

“It’s hard to say how many patients we have registered here at any one time,” says Kim, as we chat in her office among five busy consulting rooms at the centre. “We have an admin team who register new patients on a daily basis but there’s also a deductions team removing patients who have moved on. Each year the practice adds and deducts around two thousand patients.”

Keeping the practice list tidy is just one of the challenges in dealing with a student population which by nature is fairly transient. Another one is funding. Dr Des Spence is a senior partner at the practice and works closely with Kim at the medical centre.

“Our main income here is drawn from capitation but that’s weighted capitation,” says Des. “The capitation for a student is something like a third of what it might be for an inner city patient. So you work with a relatively higher list but as they’re younger and fitter the demands are less – at least in theory. In practical terms it’s hard to say.”

The Barclay Medical Practice runs another branch surgery at the nearby Maryhill Health Centre with an additional 15,000 patients more typical of an inner city population. Being in a largely working class district of Glasgow the Maryhill branch deals with a familiar set of health issues – high rates of cardiovascular disease, diabetes, smoking, obesity and alcohol and drug abuse. This offsets some of the funding gap associated with providing primary healthcare to students at the University site, for instance in achieving QOF points and payments.

Homesickness and other angst

That’s not to say students don’t come with their own unique health issues, including higher rates of mental ill health, risky sexual behaviour and problems associated with drug and alcohol overuse. Just being young and experiencing life away from home can be difficult for students.

“They may be very bright but most are also relatively inexperienced,” says Des Spence. “Often it’s almost a parental role you fill – giving them direction and advice or just simple reassurance, because obviously people go online and they Google things. And all things in Google lead to cancer, so there can be a lot of angst.”

Homesickness is another common problem. “Fortunately the University provides additional counselling services,” says Des. “But we try as much as possible to de-medicalise some of the adjustments to being at University. We limit the use of antidepressants. Often it’s about giving it time, telling them ‘speak to your friends, to your family and we’ll see how you are next week’. Things often work out on their own.”

An increasing number of students at Glasgow come from overseas and this also creates challenges. All students enrolling in the University require a certain proficiency in English but there can still be language difficulties.

“Recently we purchased two iPads to take out from behind reception to help with communication,” say Kim. “Google Translate is a big help for single words and phrases. Sometimes we have to call an interpreter and there is an interpretation helpline as well.”

Cultural differences also come into play. “People’s experiences of healthcare can vary greatly across the world,” says Des. “If you are from the States, for example, you will probably be used to being billed for your healthcare, and students from China or India come from a private medical system where people pay. In these systems there’s almost an incentive to intervene. Here in the UK we tend to do a bit less – use less antibiotics, fewer blood tests – and that takes some adjusting.”

A certain amount of flexibility with practice systems is also essential in dealing with a student population. The Barclay Medical Practice has done away with the standard appointment system at its University branch and now runs drop-in clinics every weekday morning from 8.30am, along with a booked surgery in the afternoon.

“Students tend to have a different agenda to other patients – a greater sense of immediacy,” says Des. “So we found our old appointment system didn’t work terribly well. Now virtually all of our appointments are available on the day so if a student is concerned and they arrive at 9am they are guaranteed to be seen that morning. It may not work in other places but it suits our needs.”

The practice’s relationship with the University goes back over 25 years. Seven years ago the University embarked on a refurbishment of the Fraser Building and saw this as an opportunity to rationalise student healthcare and open an NHS practice on site. The building also houses the University accommodation office, student services and catering, as well as a John Smiths shop and a pharmacy.

Inside the building it’s bright and busy with students milling about and this makes for a pleasant work environment, also helped by an easy informality among the practice staff.

“There is never a sense of them and us,” says Des. “No Dr this or Dr that – it’s all first-name terms and we are very open to staff coming to us with ideas. Approachability is important.”

Kim is also keen to foster openness as a means of improving not just the quality of patient care but also job satisfaction. She says: “We have regular ‘greeting’ meetings [as in crying, not saying hello] where the admin staff can let off a wee bit of steam but also discuss ideas. And we do listen because they know best; they’re doing the job.”

One idea that emerged from these meetings was the introduction of a four-day working week with admin staff putting in longer hours in rotas in order to have a fifth day off. “Not one member of staff said no to the idea,” says Kim. “Now people are in at half-eight to answer the phones and there is always enough staff around at six. So it works well and the staff also feel they are getting a good deal.”

Having a total practice list of over 30,000 patients, the Barclay Medical Practice is already large but there are plans to expand further either by merging or opening other surgeries in Glasgow. “One of the things about being bigger is that you get significant economies of scale,” says Des. “You can share a lot of back-office functions like telephone call-backs and prescriptions, that sort of thing. You can merge a lot of your other responsibilities and you can specialise with your admin staff doing different roles.”

Such forward thinking is just part of what keeps Des and Kim engaged in their work and the enthusiasm is clearly apparent. “Everyday it’s something different,” says Kim. “I absolutely love my job. I really am quite passionate about it; passionate about the practice.”

Jim Killgore is an associate editor at Practice Manager 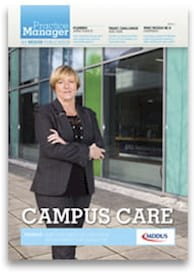