BAD MOVES Diary rarely makes mistakes but has great sympathy for all those who do. Maybe you’ve wondered why you seem to keep making bad decisions or repeating past mistakes. Perhaps your lateral frontal pole prefrontal cortex is to blame. Scientists at Oxford University have discovered this part of the brain plays a vital role in pondering life’s “what ifs”. They compared brain scans of 25 men and women with monkey brain scans and found our simian relatives lacked a lateral frontal pole. This uniquely human area of the brain – which is also linked to multi-tasking – helps us learn from watching others’ mistakes, speeding up the acquisition of new skills. It varies in size from that of a Brussels sprout to as big as a tangerine. Source: Daily Mail

RISK ON THE ROAD Healthcare workers are apparently among the most accident-prone motorists on the road. Research from gocompare.com has found that GPs made proportionately more car insurance claims than many other professions last year. Figures show 28.6 per cent of GPs had at least one claim in 2013. Professor Andrew Smith from Cardiff University’s school of psychology believes the stress of the job could be making them absent-minded and distracted, adding: “You might even find that [stress makes you] become especially clumsy at times.” Health visitors and community nurses were also in the top 10 list of claims. Gocompare.com recommends stressedout drivers are encouraged to take time to calm down before getting behind the wheel. Sage advice, although there doesn’t seem to be any data on the relationship between GP car insurance claims and the number of home visits doctors make to those less salubrious areas.

GET YOURSELF LIKED If you’ve ever wondered how to get more out of your practice employees then (yet another) survey appears to have the answer. Job website TipTopJob found that 86 per cent of employees believe they are more productive if they like their boss. A good working relationship with managers and bosses was shown to be more important than with fellow employees. Just over a third of respondents (37 per cent) said a good working relationship with colleagues made them more productive. Happiness was also listed as a motivator for 22 per cent of workers. Diary is now off to spread some good cheer.

JERKS (AND WORSE) Poor dentists never seem to catch a break when it comes to Hollywood. There’s been a string of films portraying them as psychopaths and predators, from the Nazi in Marathon Man to the sadistic nitrous oxide sniffer in Little Shop of Horrors and the sexual harasser in Horrible Bosses. Now Woody Allen has thrown in his tuppence worth. His latest Oscar winning flick Blue Jasmine stars Cate Blanchett as a down-onher- luck ex-socialite who takes a job working for a San Francisco dentist. And it’s not long before her lecherous boss makes a move on her, proving that dentists continue to rank among Hollywood’s favourite respectable bad guys. No doubt revenge by filmmakers for all those traumatic childhood memories of giant syringes and painful extractions. Source: The New York Daily News

WHAT’S IN A NAME? Ten years’ worth of frustration to one angry doctor. An Essex GP recently applied to change his name by deed poll to Dr John Cormackthe- Family-Doctor-who-works-for-the- NHS-for-free. This was done in protest at serious underfunding from his local CCG. The GP who runs a practice of 4,000 patients has been reduced to paying his staff – four nurses and a part-time locum – from his own pension fund and claims that in 2011/12 the cleaner earned more than he did from the practice. Ten years of unfruitful negotiation with representatives of his LMC and former PCT drove him to this final desperate act. Dr Cormack-the-Family- Doctor-who-works-for-the-NHS-for-free is now in the process of registering his change of name with the GMC and Mid Essex CCG.

NOW YOU SEE HIM… Most retiring GPs slip quietly away with a few buns at coffee time or maybe staff drinks at the local pub. Patients are often none the wiser. Not so with Dr Richard Hughes who retired in April at age 60 from Hanway Medical Practice in Portsmouth. Patients queued for four hours to thank the GP in person for his 32 years’ of service. Practice manager Denise Fenton said that Dr Hughes was so dedicated that he would sometimes call worried patients at 10pm to give them test results. “He knew most patients by name, made them feel valued and treated them as individuals.” A much splashier exit was planned by Dr Ajay Vora for his retirement from Barnetby Medical Centre after 25 years. Dr Vora put on a show at Grimsby Auditorium for over 1,000 of his patients with magic, music and dance. The doctor, who is member of the Magic Circle, performed along with his wife and practice nurse Angela. Dr Vora said: “We wanted to let everyone have an invitation to thank them personally and wave goodbye from the stage.” Diary would prefer buns. 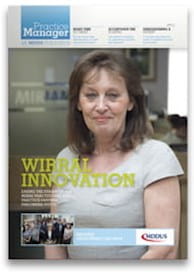