How do you manage increasing patient demand in an era of funding cuts?

HARD times are nothing new in the town of Ashington, located 15 miles up the Northumberland coast from Newcastle-upon-Tyne. At one time it was said to be the world’s largest coal-mining village, employing thousands of men in local collieries. But the decline of the industry in the 1980s and 1990s brought high unemployment and social deprivation – a legacy the town still suffers with today.

Sweeping government budget cuts in this age of austerity bite hard in such areas and healthcare provision is no exception. One local provider struggling with these challenges is the Seaton Park Medical Group. On a chilly April afternoon I travel the short distance by taxi from Morpeth Station on the main east coast rail line to meet Pat Stevenson – managing partner at Seaton Park.

With over 19,000 patients and 10 GP partners, three salaried GPs and a total staff of about 50, Seaton Park is the largest medical practice in Northumberland. In three branch surgeries in both Ashington and nearby Newbiggin-by-the-Sea, the practice deals with high levels of morbidity among a mainly white, lowincome population.

“I know from the GPs that it’s not unusual for someone to come to the surgery with as many as six genuine health issues to sort out in a 10-minute consultation,” says Pat. “And our statistics show that every quarter the demand is getting higher – the same number of patients but higher demand.”

Like many practices across the UK, Seaton Park is seeing no increased funding to cover this rising demand in services.

“Our PMS contract was forcibly renegotiated in 2007,” says Pat. “Nearly £2 million was taken out of the area, out of primary care. We suffered the loss of an equivalent of £125,000 per year. That was a big blow. And we’ve seen a static or falling income for the last four or five years. How do you cope with that?”

For Pat the answer is mainly through hard work and a clear vision of what the practice is trying to achieve. She comes from a business background, having worked for many years with a software company supplying IT systems to hospitals across the UK. In addition, before joining Seaton Park in 1997, she held a senior management role at an NHS Trust.

Five years after taking on the job of practice manager she was invited to become a partner. “It was quite a radical move,” says Pat. “Not that it’s made much difference really. I’ve always worked with the approach that there’s a job rather than a clock.” Notionally, Pat works four days a week which means “only about 60 or 70 hours”. Most important to her is the personal stake or “ownership” being a partner offers and the challenge of setting the future course for the practice – providing vision.

“Having a vision is as important as oxygen is to breathing,” she says. “Knowing where you want to be and what you want to achieve is the thing that stops you being mediocre or worse, and determines how likely you are to survive in a changing and threatening world. Certainly I think general practice in its current model is under attack politically in the UK.”

Pat believes that to make it in the current climate, a general practice must be run like any other commercial venture. It requires a broad outlook, looking months, years ahead, and also an ability to learn from other industries. But she admits that the model doesn’t quite stack up from a business point of view.

“If you are a Tesco – greater footfall and greater sales mean more profit,” she says. “But for us the more appointments we offer, the more it costs us. It turns the business model completely on its head. Contacts cost.”

So how does a large practice like Seaton Park deal with rising demand and diminishing resources? One possible option is to strive for greater efficiency. Compared to most hospitals, says Pat, the amount of waste in Seaton Park is miniscule. “I have been working on reducing it for the last 15 years and that makes a difference but it can only go so far.”

In recent years Pat has embarked on a different tack and become a fervent believer in the concept of demand management. Looking at it in the context of general practice, Stephen Gillam wrote in the BMJ: “The objectives of demand management are essentially utilitarian: the maximisation of total met need for the greatest number within available resources. The process is not simply about curtailing demand for ineffective services but may involve creating demand for underused services known to be cost effective.”

In explaining the concept to me, Pat likens it to building roads. “They put a motorway around Newcastle, two lanes in each direction. Fantastic – it took traffic from the toll tunnel underneath the Tyne. It was wonderful. Within a year or two the road was full. So you build more lanes and what do you get – more cars. At some point you have to do something to stop people from wanting to drive. You need to offer alternatives.”

Pat and her team began exploring more innovative ways of dealing with the rising demand among patients at Seaton Park. Among the initiatives they introduced was an Xpress Clinic run by specialist trained nurses, offering treatment for minor illnesses such as acute cough and chest infections, earache and urinary infections. The service has helped free up more GP consulting time. The practice also offers a telephone consultation service in which a patient can speak to a GP about minor illnesses and other issues such as medication reviews or fit notes. Again this reduces the need for more lengthy face-to-face consultations.

But providing alternative services is of no use unless patients are actively directed to use them. So the practice introduced a computer-based tool called Navigator which the medical receptionists use to guide patients to the most appropriate service. This might mean offering an appointment at the Xpress Clinic or with a practice nurse or healthcare assistant – or if necessary a GP either by phone or face-to-face. Patients may also be directed to the primary care access centre at the local hospital or Pharmacy First. The system was developed by GPs and includes safety features to manage emergencies and urgent needs.

“It’s not about denying access to doctors,” says Pat. “If the patient says ‘I want to see the doctor’ then they have that right to do so. And it’s also not about receptionists being clinicians.”

She admits to some resistance among patients. “There will always be people who think a receptionist has no right to ask them anything. But the majority of our patients think Navigator is a good thing.”

Such innovations tend to be driven by budget considerations and it’s easy for practice managers to get overly focused on the balance sheet. Says Pat: “We are very much driven in how we deliver our service by the money – what is available to spend. But our practice values are also hugely important.”

On the Seaton Park website these values are clearly articulated: a commitment to patient-centred care which looks at the whole family, equality of treatment, listening to and respecting patients, and respecting and caring for colleagues. They serve as the litmus paper for the decisions made by Pat and the other partners. No initiative can avoid the question: “Is this something good for our patients?”

Or as Pat puts it: “We have to preserve what’s precious, because that’s what gets us up in the morning, that’s what makes us all work ridiculous hours – because we believe in what we do.” 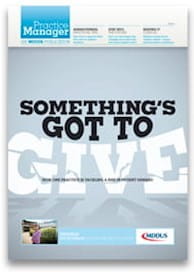