THE morning I travel to Stafford to meet Steve Powell he kindly offers to pick me up at the train station. In the email he says to look out for a slate grey Mercedes E Class Coupe and I do not have to wait long before he pulls up in what is a very nice car.

Steve is a busy man and it’s clear that making time to meet with me has not been easy. He manages a group of three medical practices with over 18,000 patients – the largest in South Staffordshire – but this is only part of his current responsibilities. Steve is also Chair of the Stafford and Surrounds GP Commissioning Consortium which is one of the government’s much talked about Pathfinder consortia at the heart of its controversial NHS reforms in England. Most of the lead executives in emerging commissioning consortia are GPs so Steve is the rare exception being a practice manager.

Our first stop of the morning is Beaconside Health Centre located in a new and spacious building on open ground adjacent to the campus of North Staffordshire University for which it serves as a student health centre. Beaconside was opened in 2005 as part of a planned expansion out of the original practice at the Weeping Cross Health Centre. Steve is clearly proud of the set-up as he tells me later in the large training and meeting room at the centre. He organised the construction of the new building – designed the layout and even chose the colours.

Steve is not only business manager of the group practice but also a partner. He says this “mature relationship” has allowed the practice to grow in a managed and innovative way.

“The GPs recognise that my skills are in business and finance and their skills are in medicine. Being a partner helps keep things on an even footing.”

Steve joined Weeping Cross in 1994 having before studied business and finance and run his own successful catering business. Then it was a small practice of about 4,800 patients with only two GPs and had never before employed a practice manager.

“No one knew what a practice manager was meant to do,” says Steve. “I was given a filing cabinet with about 20 years of paperwork and told to build my own job really. And I have been fortunate to be able to carry on doing that.”

The Weeping Cross practice grew as residential development in the area expanded in the late 1990s with the patient population being within commuting distance of both Manchester and Birmingham. In the early 2000s the practice began providing services on the campus of the University and eventually purchased land to build the Beaconside Centre. This brought an additional 6,000 patients. Just recently the practice merged with a third practice – the John Amery Drive Surgery. The combined group now employs around 45 staff including 12 GPs.

In addition, five years ago Steve together with the other partners in the practice set up a separate private limited company called the Beacon Clinic Ltd offering a range of medical cosmetic treatments and travel medicine services as well as providing primary care services to the Ministry of Defence.

Steve does not see any conflict between being entrepreneurial and also providing care in a National Health Service. He says:

“Remember that GPs are independent contractors. I never describe myself as working for the NHS. I consider I work for a business that is owned by GPs and myself. And we follow the rules and principles of business and it just so happens that the product we deliver is quality patient care.”

Steve’s interest and involvement in NHS reform began back in 2004 with the new GP contract and the introduction of practice based commissioning. In 2005 Weeping Cross joined with five other practices in an informal group which over the years evolved into the Stafford and Surrounds Practice Based Commissioning Consortium. It now includes 15 practices representing 145,000 patients with a budget of about £173 million. Steve has served as chair of the consortium since its inception.

“It’s all very democratic. We have elections every year for clinical lead and chair. I’ve tried to get out of it several times now but I keep getting nominated and voted back in,” he says.

“The workload is phenomenal. It started out at about four or five hours a week but now I probably put in 30 hours a week in GP commissioning. So that makes a 70-hour-plus week with my other responsibilities. It’s virtually doing two jobs and I’m happy to carry on as long as my health and enthusiasm hold out.”

Should the NHS reforms go ahead, GP consortia like Stafford and Surrounds will in 2013 begin commissioning patient services directly from hospitals and other providers. Many of the Pathfinder consortia have already launched local commissioning initiatives.

In Stafford and Surrounds one of the most successful of a number of programmes has been the Greyfriars Therapy Centre. The consortium developed a detailed business case for the PCT to lease and adapt a new building in order to provide a one-stop shop for a range of local social and healthcare services including pain management, pulmonary rehabilitation, rheumatology, orthopaedic triage and out-patient general and dermatological surgery. It also gave the consortium the opportunity to start to integrate health and social care teams by co-locating them in the same building which is an important element in the government’s reform plans.

“The benefits are several-fold,” says Steve. “You don’t want to go into hospital if you don’t have to. The service is provided in a less daunting, less clinical environment. The quality of care is better than in a secondary setting and the risk of contracting a hospital-acquired infection is much less. It also falls within government aims of providing care closer to home and it saves the health economy a significant amount of money because it’s done at 70 per cent of national tariff – that’s a 30 per cent saving. And patient feedback has been fantastic – with 98 to 99 per cent satisfaction ratings.”

The consortium has also delivered a number of other new initiatives in the past year including the expansion of its community ENT triage service, the launch of new services in stroke care and primary care mental health along with other projects in dementia, end-of-life care, diabetes and osteoporosis. Steve is an ardent supporter of GP commissioning.

“The one thing that irritates me more than anything is bureaucracy,” he says. “I cannot tolerate pen-pushing and filling forms for the sake of it. What we have been able to see and do with PBC is cut through all the red tape and get things done a damn-sight quicker by driving it ourselves. Left to the PCT, I do not know if the local health economywould have achieved half of what’s been accomplished by PBC.”

But the devil is in the detail and Steve believes it is crucial that established Pathfinder consortia lead the way. He also sees an important role for practice managers in the success of GP commissioning.

“Practices will be taking responsibility for devolved budgets which will probably on average be around £8 million to £12 million a year. Practice managers will have to up-skill and start working smarter. The ability to prioritise and time manage will become crucial.”

Steve even foresees the possibility of someday having specialised practice managers much as there are specialist GPs. “In a consortium you might have practice managers who specialise in finance or HR or health and safety or clinical policies. And the skill set might be interchangeable between practices.”

Having some formal training in management and business will also become more important for practice managers. Steve recently undertook a Certificate in Healthcare Finance which included a module on GP commissioning andwould recommend it to any practice manager seeking to enhance skills. His view is that GPs can provide the clinical drive in commissioning but it may largely be up to PMs to drive the management, administration and vision.

Steve has no illusions regarding the pitfalls and complexities facing the new NHS reforms. “It’s a mammoth task pulling practices together to work cohesively,” he says. “But it’s got to happen because the NHS as it is now is not sustainable.”

Jim Killgore is an associate editor of Practice Manager 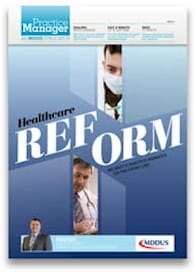