ON August 5, 1962, Marilyn Monroe was found dead in the bedroom of her home in Los Angeles. While considerable controversy surrounds her death, what is not in question is that she died from barbiturate poisoning. Barbiturates had been widely used for over a century in sedatives and sleeping tablets, but their toxicity in overdose was always a serious problem. Efforts to develop safer, but still effective, sedatives had yet to yield tangible results though the major pharmaceutical companies recognised that any such product would offer a huge commercial advantage.

A drug that seemed to fit this bill was developed by the German company Chemie Grünenthal in the 1950s. Originally developed as an anticonvulsant, its sedative properties were quickly identified, and the apparent safety of the drug was striking. Company scientists found that there was practically no dose lethal to rats.

The drug in question was thalidomide, and it was launched in West Germany as Contergan in October 1957 as an over-thecounter sedative. More than 40 other countries followed, including the UK where thalidomide was launched in April 1958 as Distaval. As the drug also reduced nausea it became a popular sleeping tablet amongst pregnant women suffering from morning sickness.

The first thalidomide victim is thought to have been born in December 1956, before the drug was mass marketed. The child’s father was a Grünenthal employee who received advance samples of the sedative, which he gave to his pregnant wife. However, it would be another five years before the link between the deformities and the drug would be made.

An easy one to start

In September 1960, the new drug application for thalidomide landed on Frances Kelsey’s desk in Washington DC. Kelsey was a physician and pharmacologist, who had just been appointed as a medical officer and reviewer of new drug applications at the US Food and Drug Administration (FDA). She later recalled: “They gave it to me because they thought it would be an easy one to start on. As it turned out, it wasn’t all that easy”.

The American drug company Richardson-Merrell had licensed the drug from Grünenthal and was poised to flood the American market once they had dealt with the formalities of the FDA. However, Kelsey, with her rigorous training in pharmacology and meticulous attention to detail, did not view her role as a formality and Merrell’s application, which was weak and shoddily put together, failed to impress.

Kelsey responded to Merrell for the first time on November 10, 1960, stating that their application was incomplete. At the time, the FDA had 60 days in order to process a new drug application, and a pharmaceutical company could go ahead with marketing their product if they heard nothing by this deadline. However, the deadline did not apply if the application was deemed by the FDA to be incomplete. On day 58 Kelsey threw out the application, presenting Merrell with their first rejection in a battle that would go on between them for 18 months.

During this time Merrell visited, phoned and wrote regularly trying to influence Kelsey. Their superficial civility wore off fast and she was accused by company officials of stubbornness and simply avoiding making a decision, among other things. Kelsey later told a Life magazine reporter: “Many of the things they called me you couldn’t print”.

At one of these many meetings, Merrell brought a hired gun. On September 7, 1961, in her spartan office in the rather ramshackle headquarters of the FDA, Kelsey met with three visitors—two company officials from Merrell and a third man, Dr Louis Lasagna from Johns Hopkins. Lasagna was a respected physician-scientist, an outspoken advocate of controlled clinical trials and evidence-based medicine, and he had recently given evidence against the pharmaceutical industry at hearings in Washington DC. In this context, Lasagna’s seat on the corporate side of the table at that meeting might appear puzzling.

As it turns out, Lasagna had conducted one of the few clinical trials investigating thalidomide, and Merrell had enlisted him as a paid expert to help argue their case in front of the ‘stubborn’ Kelsey. In 1960, he published a randomised placebo-controlled sleep study evaluating different doses of thalidomide. His study was part funded by Merrell, who also supplied the thalidomide he used.

Whatever Lasagna said at the meeting, it made no difference and Kelsey stood firm. Three months later her concerns unfortunately proved to be justified as increased numbers of babies with a range of abnormalities were born in West Germany and in other countries where thalidomide had been sold. A striking feature of these abnormalities was phocomelia, which literally means seal extremities. These children had been born without the proper development of the long bones in their limbs, often giving their arms and/or legs a flipper-like appearance. Sylvia Plath in her poem Thalidomide described this succinctly as ‘knuckles at shoulder-blades’.

As publications appeared linking the upsurge in these birth defects with thalidomide use in the first trimester of pregnancy, Grünenthal were forced to withdraw thalidomide from the European market on November 27, 1961. In the US, however, Merrell continued to badger Kelsey with claims that there was no proof of a link. As the evidence grew and the full horror of the tragedy unfolded, Merrell quietly withdrew the new drug application in March 1962.

Four months later, the media circus around Kelsey began with an article above the fold on the front page of the Washington Post. This piece, carrying a prominent photo of Kelsey, declared her the “Heroine of FDA”. The article, which elevated Kelsey to virtual civic sainthood, was engineered by advocates of drug regulatory reform—an astute political move that served to raise the temperature of the debate and to create a public appetite for change. Now events shifted gear.

Momentum growing, the following month there was a call in Congress for Kelsey to be honoured, and remarkably this was realised in less than a week, when President John F. Kennedy presented Kelsey with the Distinguished Federal Civilian Service Medal at a highly publicised White House ceremony on August 7, 1962, 48 hours after Marilyn was found dead.

The spotlight was now on thalidomide, the FDA and everyone concerned. Thousands of column inches were filled with analysis and interviews but not everyone was optimistic about the proposal of tougher new pharmaceutical regulation. With the prospect of greater control often comes outrage from those who will be controlled. John Osmundsen reported on the front page of the New York Times that “many medical authorities” in the US were “concerned that what some call the ‘frenzied public response to the thalidomide episode’ may adversely affect the nation’s drug laws”. Their concerns stemmed from the greater controls and accountabilities that they could foresee in the forthcoming legislation.

The only one of these concerned scientists to be named in the piece was Louis Lasagna who offered “a way out”. He is quoted as calling for “academicians and industrial scientists...to serve in advisory capacities to help draft sensible provisions to safeguard the American people”.

Perhaps Lasagna had himself in mind for this role, together with his “industrial scientist” colleagues at Merrell, for he went on to argue that “thalidomide is too valuable a drug to lose. It is the safest sedative yet discovered; it will not kill animals or humans even in heavy overdoses”. That Lasagna should still be rooting for thalidomide in August 1962, when reports of several thousand birth defects in Europe had already been received, is difficult to understand and perhaps betrays either a lack of judgement or a too cosy relationship with his industrial sponsors.

He went on to defend his position by linking the thalidomide tragedy with the other headline of the hour—Monroe’s premature death. Osmundsen reports: “Lasagna observed that, if Marilyn Monroe’s physician had been able to prescribe thalidomide instead of barbiturates, the movie star might be alive today”.

Lasagna’s claim is undoubtedly true, for in overdose thalidomide is a much safer drug than the Nembutal taken by Marilyn. But Lasagna failed to appreciate, or perhaps just failed to acknowledge, the likely outcome if thalidomide had been available on prescription (or even over-the-counter, as Merrell had wished) in 1960s America. The United States at the time was a much more medicated population than the UK or Germany, with a considerably larger population than both countries combined. The numbers of thalidomide-associated birth defects would likely have been proportionately greater in the US than elsewhere and would certainly have run into the tens of thousands.

Yes, Marilyn may have been saved, she may have completed Something’s Got to Give, her final doomed movie, and, who knows, even gone on to live long enough to receive her honorary Oscar one day, but the associated costs would have been enormous. Marilyn would not have been the only victim of barbiturate poisoning saved by the availability of a “safer” alternative. In New York City alone, between 1957-63 there were over 1,100 deaths due to barbiturate overdose. But those were not the lives Lasagna chose to balance against the use of thalidomide. It was Marilyn’s, the screen goddess, whose death at the age of 36 had made the front page of every newspaper and magazine in America only three weeks before.

The symbolism of his statement was powerful, and the counterfactual it presented was tempting. What if thalidomide had been prescribed instead of Nembutal, would Marilyn still be smiling her perfect inviting smile in Technicolor; would the fantasy still be alive? There is something absurdly crass about linking Marilyn’s, albeit manufactured, beauty with the monstrosity of thalidomide’s effects and Lasagna’s use of this imagery seems insensitive and misplaced.

Lasagna was, however, right when he predicted that thalidomide was “too valuable a drug to lose” but not, as he thought, because it was a useful sedative. In 1998, the FDA approved the drug for the treatment of erythema nodosum leprosum, a severe and debilitating complication of leprosy. Although thalidomide offered some benefit to patients with this condition it still possessed its teratogenic effects and the FDA took the unprecedented step of tightly controlling the drug’s marketing and insisting on a robust patient education programme, the maintenance of a patient registry and even mandatory pregnancy testing for sexually active women of childbearing age.

At the age of 80, Frances Kelsey, still working for the FDA, served on their Working Group to develop and implement uniform standards of safety for clinical studies using thalidomide. Her experience with the drug was, understandably, seen as a great advantage. While she was acutely aware of the potential benefits that thalidomide may offer certain patient groups, Kelsey remained cautious. “We need to take precautions,” she said, “because people forget very soon”.

Perhaps when we recall her meeting with Louis Lasagna, some 37 years earlier, and the position he maintained afterwards we might be forced to conclude that some fail to learn in the first place. 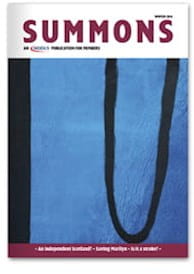