Our ethics columnist offers an ethical perspective on disagreement

SEVERAL apparently unrelated experiences have prompted me recently to think about disagreement. First, I led a session for clinical teams on ethical erosion in clinical practice and professional training. It was a memorable and moving session in which doctors at all stages in their careers shared stories, sometimes verging on confessions, of moments when they wished that they had challenged a colleague whom they perceived to have acted inappropriately or even unethically.

We explored why these doctors perceived “ethical challenge” as distinct from, and more difficult than, other sorts of disagreement. One participant explained that, for him, questioning ethics can sometimes appear to challenge the core of a person’s belief system and therefore identity. As such, sometimes even gentle debate and constructive challenge can feel, if not personal, certainly uncomfortable.

The second experience that has caused me to reflect on disagreement has been my preparations to welcome Debbie Purdy to St. George’s for an event organised by the Ethics Society. Debbie will be wellknown to many readers both for her legal action and campaign in relation to the law on assisted dying. I first met Debbie when we appeared on an episode of Radio 4’s Inside the Ethics Committee together. I had been particularly struck when Debbie said during the course of that recording that she had an excellent relationship with her GP, even though they each had diametrically opposing views about changes in the law relating to assisted dying.

Debbie explained that she and her GP enjoyed a therapeutic relationship that was built on trust and respect; a relationship that accommodates abject disagreement about one of the most emotive subjects in healthcare ethics.

It is possible for individuals to disagree irreconcilably about highly-sensitive subjects. Indeed, I would go further and say it is inevitable and desirable that dissent is not merely felt, but expressed and heard. I would argue that uncertainty, complexity and plurality of approach are signs of ethical competence not incompetence. The confidence to acknowledge and express that uncertainty and plurality (and to accept its expression in others) is, for me, what it means to learn and to practise ethics.

Finally, I have been listening to the second of Michael Sandel’s wonderful series The Public Philosopher on Radio 4. No matter what the topic or who has the floor or which direction the discussion may take, Professor Sandel is a patient, thoughtful and intelligent facilitator. Effective inquiry thrives because of his personal commitment to creating a respectful and inclusive atmosphere in which everyone’s voice is afforded equal attention irrespective of perceived status, personal biases or lazy assumptions. Michael Sandel is a role model for anyone who wants to create a safe environment in which ethical disagreement can be not just explored but harnessed to generate meaningful discussion in which everyone, irrespective of their views, is enriched.

The content is, of course, fascinating and stimulating, but it is Professor Sandel’s personal qualities – virtues or values if you will – that, for me, make these programmes uniquely worthwhile. His curiosity, enthusiasm, wit, humour, fairness and intelligence imbue every stage of the process. His gentle steer produces nuanced discussions that are rare in their quality and richness. And he does so by beginning with disagreement.

Disagreement is inevitable and it will often feel threatening. This is neither unexpected, nor is it unique to medicine. Few people (including me) like to be challenged or relish having the weaknesses in our arguments revealed. It is exposing and, if not done carefully, can result in feeling alienated and inhibited. Yet disagreement should be celebrated, especially in healthcare ethics. Homogeneity is not merely unrealistic, it is potentially dangerous: it compromises learning, reduces moral awareness and, at worst, can lead to the dysfunctional cultures in which individuals either do not speak out about poor practice or are ostracised for doing so.

When I was an undergraduate at university, I had an influential tutor who advised that I should always be sure to surround myself with those who disagreed with me. After one bruising tutorial too many, I was not, initially, persuaded of the value of such an approach. However, over 20 years later I can see the wisdom of that advice. Indeed, I believe that deliberately seeking out those whom I anticipate will disagree with me is vital. I also think I have learned that it is possible to disagree well. To do so requires patience, courtesy, sensitivity, fairness, self-awareness, empathy, intelligence and respect. No wonder we find it so difficult. Yet, everyone has an interest in creating a safe and effective environment in which disagreement can be explored and expressed.

So, perhaps now is the time to think about where, when and how disagreement occurs in your working life. Would you agree? 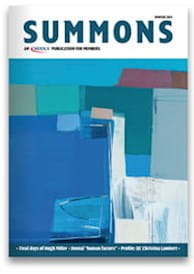