IN OCTOBER of last year the National Patient Safety Agency revealed that hospitals in England had reported a total of 111 so-called “never events” affecting surgical patients in the year 2009/2010.

Never events are defined as “serious, largely preventable patient safety incidents that should not occur if the available preventative measures have been implemented”. Primary care trusts are required to monitor and report their occurrence on an annual basis.

Just over half of these never events (57) were related to wrong-site surgery. The NPSA defines this as surgical intervention performed on the wrong site – be it the wrong organ or joint or eye or even the wrong patient. Reports in the press of catastrophic errors such as removing a healthy kidney in place of a diseased one or amputating the wrong leg seem to stretch credulity. And yet such things have happened in even the most up-to-date and “efficient” surgical wards. It has been estimated that one out of four orthopaedic surgeons in practice in the USA for more than 25 years will have performed at least one wrong-site surgery.

Such cases are often the result of multisystem failures. These might include errors in patient notes or a misread radiology report. It might involve GPs, nurses, radiologists, anaesthetists but in the final analysis, and from a medico-legal point of view, it is still the surgeon taking up the scalpel who bears ultimate responsibility. Such errors are indefensible and yet the risks are probably greater today than ever with more day surgeries and waiting list initiatives, meaning that surgeons are much more likely to be operating on patients they may not have seen before.

The recent NPSA 2010 report on never events has attracted particular attention as it comes just 10 months after the agency ordered the implementation of the Surgical Safety Checklist in every hospital in England and Wales. The checklist was devised by the World Health Organisation after a year-long global pilot of nearly 8,000 surgical patients across eight countries. The findings from this pilot study were compelling – adherence to the checklist resulted in a one-third reduction in surgical deaths and complications.

Back in January 2009 the NPSA made three key recommendations with actions to be completed within one year:
1: Ensure an executive and a clinical lead are identified in order to implement the surgical safety checklist within each organisation.
2: Ensure the checklist is completed for every patient undergoing a surgical procedure (including local anaesthesia).
3: Ensure the use of the checklist is entered in the clinical notes or electronic record by a registered member of the team, for example, surgeon, anaesthetist, nurse or operating department practitioner (ODP).

Central to the WHO checklist is a core set of standards that can be applied universally within any healthcare setting to address issues including correct site surgery, haemorrhage risk, antibiotic prophylaxis, airway management and the risk of allergies. A designated checklist coordinator must be made responsible for checking the boxes on the list; most often this will be a circulating nurse but it could be any clinician or healthcare professional participating in the operation.

The checklist itself is divided into three phases – sign in, time out, sign out – but it is obviously in the first two phases where the risk of wrong-site surgery is addressed.

Sign in is the period prior to induction of anaesthesia and includes the pre-surgical briefing at which the surgeon, anaesthetist and scrub nurse should all be present. The checklist calls for the patient to be involved in confirming identity against the hospital wristband, confirming the site of surgery and ensuring that informed consent for surgery has been given. Should confirmation by the patient be impossible, a carer or significant other can support this process.

Next the surgical site should be marked and ideally by the operating surgeon performing the procedure or, if appropriate, a nominated deputy who must be present in the operating theatre when the procedure is carried out. It is essential that the operative site is confirmed by the surgeon with the team prior to the start of surgery. The following recommendations on marking surgical sites were published in 2005 by the NPSA and the Royal College of Surgeons of England.

How
● Use reliable documentation and imaging (if applicable).
● The mark must be an arrow that extends to, or near to, the incision site and remains visible after the application of skin preparation.
● In some circumstances it may be appropriate to note the procedure to be undertaken.
● An indelible marker pen must be used that is suitable to the patient’s skin type and the type of skin preparation to be used.

When
● The surgical site must be marked in the designated area prior to surgery, e.g. ward or pre-admission area prior to pre-medication being administered if applicable.

Where
● Surgical site must be identified and marked accordingly although some exceptions may apply, e.g. some gynaecological and urological procedures that do not require external marking for surgery on singular internal organs (uterus, bladder).
● Surgical procedures that involve side (laterality) must always be marked with particular consideration to specific digits of hands, feet and spinal levels.

Time out is the phase prior to the start of the actual surgical intervention (e.g. skin incision). Here the checklist makes a number of further specific recommendations. The checklist coordinator should ensure that all team members have introduced themselves by name and role, including information regarding level of experience. Students and visitors or observers should also be introduced and particular attention should be paid when regular team members may be absent due to shift changes.

Next the surgeon, anaesthetist and registered practitioner must verbally confirm patient, site and procedure. This is the standard “time out” or “surgical pause” and should include confirmation of the name of the patient using the wristband, what surgical procedure is to be performed, the site and the positioning of the patient to avoid operating on the wrong patient or the wrong site.

This box should not be checked until the anaesthetist, surgeon, circulating nurse and patient (if not sedated) verbally confirm agreement. Only then can the operation go forward. A record of having used the checklist should be entered in the clinical note or electronic record.

The NPSA has collaborated with the Royal College of Radiologists to produce a checklist specifically adapted for radiological interventions where wrongsite and other errors are a risk. A collaborative project with the Royal College of Ophthalmologists has also resulted in a checklist specific for cataract surgery where there have been cases of the wrong eye being operated on. These can both be found on the NPSA website along with general guidance on the Surgical Safety Checklist.

It is clear that strict adherence to local procedures based on the WHO checklist will help ensure wrong-site errors become truly never events. In medico-legal terms, evidence that such procedures have been implemented will be essential in defending future claims of medical negligence in surgery and any subsequent disciplinary or GMC proceedings.

Despite the wide media coverage they attract, instances of wrong-site surgery remain rare. One recent case reported in the BMJ concerned a healthy 23-year-old man who presented for cataract surgery. In pre-op he expressed some concern that the surgeon was clear which eye was to be operated on. Later after numerous routine site verifications the patient lifted his surgical cap and said: “Had I realised all these steps would be taken, I wouldn’t have done this.” Shaved into the short hair on the side of his scalp was a large arrow pointing to the correct eye – better safe than sorry! 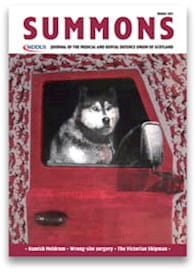