It's all about... timing

Deborah Bowman considers what relevance might time have in the perception of, and responses to, ethical questions and problems

BY inclination, I like to think things through and take my time over decisions. I realise this will do little to alter the view some readers might have of ponderous academics with ethics in their title.

In my defence, I have learned to respond quickly when required and recognise that it is sometimes necessary, but it is often an uncomfortable experience for me. I over-use the phrase “let me think about it”, although at least I do always go away and think about whatever the “it” may be.

I have long been fascinated by the temporal element of ethical choices and decision-making. Is a decision mulled over and considered at length a “better” one? What relevance might time have in the perception of, and responses to, ethical questions and problems?

I first began to notice time as a factor in clinical ethics when I co-founded a clinical ethics forum at the hospital and university where I work. It seemed that the majority of cases we received for discussion were coming to the forum retrospectively. The “crisis”, or at least the acute dilemma, had passed. The teams who brought the cases had entered a different phase: one of reflection and retrospection. The impulse was no longer to “solve” a pressing problem or to tackle an immediate question, but to step back and to consider the choices made.

Often, clinicians would express the view that doing so would help them if they were to encounter similar situations in future. However, the predominant impression with which I was left by these discussions was that there was an almost visceral urge to debrief in an informed, but non-judgemental space. With temporal distance, it was possible not only to ask the difficult questions, but also to face the answers that might emerge and to build ethical confidence. In these discussions, the toll of moral decision-making was often evident and I was left in no doubt that it endures long after a case has been concluded.

There is a much-read book that I keep on my shelf called Complex Ethics Consultations: The Cases That Haunt Us, and that title resonates with me like few others. However urgent or time-constrained an ethical decision or choice may be, its impact lingers long and has a temporal form of its own, casting a shadow (or sometimes a light) over the present and the future. Its effects will be felt by all those involved long after apparent resolution, often irrespective of whether the outcome is perceived as positive.

Time is rarely discussed in ethical decision-making, but this is, I think, an oversight. There are many ways in which the temporal dimension of moral choices is relevant. Like me, most people will have a preferred style in decision-making: are you decisive and swift in judgement or more deliberative? Most of us will have learned to adapt over time, but knowing one’s preferences and considering how to work with those who take a different approach is an important first step in facilitating high-quality and inclusive ethical decisionmaking in a clinical service or team.

Think about the temporal elements in an ethical question you’ve encountered. Did the notion of “duty of care” alter as the clinical situation unfolded? What variables were important at different stages in the case? Were there variables that warranted more attention at some points than others? How was the influence of time felt and managed? What is the legacy of that situation for you and others? How will that legacy inform your response in future?

Time also prepares us for difficult situations. As a theatre lover, I’m fascinated by the concept of rehearsal and its role in ethical practice. To know what one ought to do is often scant preparation for actually “doing the right thing”, particularly in a complex, pressured and hierarchical system such as the NHS. Time spent not only talking about, but practising what kinds of response might be possible in a safe environment, is invaluable. Experience is, by definition, a cumulative process, but one that is immeasurably enriched by structured support that allows for people to develop and for confidence to grow.

My friend and colleague, Ann Gallagher, has written persuasively about the value of “slow ethics”. She argues that, in a time-pressured health service, pausing to reflect and to reconnect with the fundamental virtues and values of healthcare rather than being seduced by the claims of the quick fix or simplistic solutions would raise morale of staff and patient alike. To do so would be to attend to what matters and to prioritise ethical practice that is sustainable. Like comedy, ethics is, it turns out, a matter of… timing. 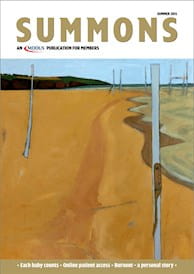