A question of candour

IN April 2006, John Moore-Robinson attended the A&E department at Mid Staffordshire General Hospitals NHS Trust following a mountain biking accident. He was examined by a junior doctor who did not suspect anything serious and discharged him with advice to take analgesia. Sadly the patient died of a ruptured spleen at another hospital the following day.

A statement written for the coroner by a trust A&E consultant that was critical of the treatment was not given to the coroner on the advice of the trust’s in-house solicitors. They believed that it dealt with issues concerning liability and was not appropriate for the inquest, which was a fact-finding exercise. Although the claim for negligence was settled out of court the family did not find out about the consultant report until the first Mid Staffordshire Inquiry.

The case of John Moore-Robinson was used by Robert Francis QC to highlight the inadequacy of current professional and ethical obligations for healthcare staff to be honest and open with patients when mistakes are made. In his view, what was needed was a statutory duty of candour backed by criminal sanctions against both organisations and individuals.

The actions of the trust in failing to pass on the consultant’s statement were not considered unlawful as at the time there was no legal duty to disclose the document. Nevertheless, it was felt that the trust’s in-house solicitors were “simply at the wrong starting point’ with their intention of withholding information which was not in the best interests of the trust to disclose.

The Francis Inquiry recommended that, where death or serious harm has been or may have been caused to a patient by an act or omission of the organisation or its staff, full disclosure must be given to the patient or their representatives whether or not they have asked for it. Furthermore, it recommended that it should be a criminal offence for any registered medical practitioner, nurse or allied health professional to knowingly obstruct someone in the performance of these duties or to provide information to a patient or relative with intent to mislead them about an incident, or to make an untruthful statement to a commissioner or regulator knowing that they are likely to rely on that statement.

Since the Francis Report was published in February 2013, much has been said about the pros and cons of a statutory duty of candour backed by criminal sanctions. Professor Don Berwick in his report did not agree with the need for an “automatic” duty of candour where patients are told about all errors, including near misses. In its final response to the Francis Report the government agreed to introduce an explicit duty of candour as a Care Quality Commission (CQC) registration requirement for organisations, but it did not accept the need for a criminal offence for any individual healthcare professional found to be in breach of the statutory duty of candour. This duty will very likely come into force in October 2014.

It should also be appreciated that existing obligations for doctors around openness and honesty are set out both in the NHS Constitution and the GMC’sGood Medical Practice. In so far as NHS Trusts are concerned, the NHS Standard Contract which came into force in April 2013 contains (at Service Condition 35) a contractual obligation of candour which states that providers must tell a patient (in writing, with all of the facts and an appropriate apology) about any unintended or unexpected incident that could have or did lead to moderate or severe harm or to the death of a patient.

Subject to parliamentary approval of the Care Bill, the draft regulations due to come into force in October will impose on health and social care providers a duty of candour for any harm to a service user resulting from their care or treatment above a certain “harm threshold”. For healthcare providers this threshold will include harm classified as “moderate” or “severe”, or where “prolonged psychological harm” has arisen. Duty of candour will also apply in cases of death, if the death relates to the incident of harm rather than to the natural course of the patient’s illness or underlying condition. One advantage of using this threshold is that it is the same as the harm threshold used in the contractual duty of candour (with the exception of the inclusion of “prolonged psychological harm”). Where the harm threshold has been breached, the service provider would need to:

• Notify the service user (which includes someone lawfully acting on their behalf where necessary) that the incident has occurred. This notification will include an apology.

• Advise and, if possible, agree with the service user what further enquiries are appropriate. Provide all information directly relevant to the incident.

• Inform the service user in writing of the original notification and the results of any further enquiries.

In assessing whether harm is low, moderate or severe, guidance can be obtained from the publication Seven Steps to Patient Safety, where the example given to illustrate the differences is a patient who suffers a perforation of the bowel during surgery. If recognised at the time, repaired, washed-out and antibiotics given, this would be classed as low harm. If the mishap was not picked up during the operation and resulted in septicaemia, with the patient requiring a return to theatre for repair, this would be moderate harm. Should the patient end up requiring a temporary colostomy and subsequent major operations this would constitute serious harm.

There will invariably be issues over categorisation of harm and one recent recommendation was to use the composite threshold of “significant harm” to cover moderate and serious harm and death. It is hoped that the final wording of the regulations can provide further clarity on this point.

Recent consultations on the statutory duty of candour have sparked debate about how it will operate, what it will cover and whether the draft regulations will be applied consistently. But what is clear is that a statutory duty on service providers will be implemented.

For the individual hospital doctor, the best advice is to ensure that they follow existing GMC guidance in telling patients when things go wrong and a patient is harmed. A prompt and full explanation of the short and long-term effects of the mistake along with an apology will not be seen as an admission of liability. The existing ethical duty on doctors is wider than the proposed statutory duty of candour, or indeed the contractual duty, so a doctor following this should be open and transparent with his patients in any case. However, as the statutory duty is likely to tie-in with the current contractual duty, it is also paramount that all hospital doctors understand and follow their organisations’ procedures for reporting patient safety incidents. Careful note-taking and documentation of any discussion explaining a mistake is also vital.

Where there are uncertainties over specific cases, advice should be obtained by contacting MDDUS. 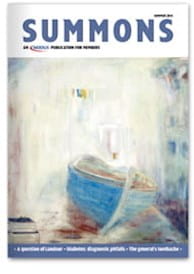