EARLIER this year the General Medical Council released a wide range of new guidance which came into force on 22 April 2013. The main development was the publication of an updated version of the GMC’s core guidance, Good Medical Practice (GMP), which had not been revised since November 2006. The GMC also published 10 pieces of “explanatory guidance” to demonstrate how the principles set out in GMP might be applied in practice.

One key aspect of the updated guidance is the GMC’s strengthened focus on raising and acting on concerns about patient safety. This is entirely separate to the new contractual duty of candour in the NHS, which applies to providers of services to NHS patients. A doctor’s GMP obligations are broader than this and apply to all doctors holding GMC registration, whether they work in the public or private sectors.

Within my recent practice I have encountered a number of instances of the GMC opening investigations into doctors who, in its opinion, failed to take sufficient action in respect of colleagues who posed a risk to patient safety. Here are some examples.

Dr X and Dr Y were the medical director and deputy medical director of a trust where the Care Quality Commission (CQC) uncovered serious patient safety issues. A number of doctors and nurses at the trust were referred to the GMC and Nursing and Midwifery Council by CQC. There was no evidence that Dr X or Dr Y had specifically been informed of the patient safety issues. However, the GMC commenced fitness to practise investigations into both of them on the basis that the errant conduct had happened on their watch.

Dr Z was the senior partner of a four-partner GP practice. He heard receptionists gossiping about one of the practice’s GPs being involved with a patient. Several years later, when it transpired that the GP had been involved in a sexual relationship with a vulnerable patient, Dr Z told the GMC about the gossip he had heard but had done nothing about. The GMC opened an investigation into Dr Z’s conduct.

The message from the GMC is clear: if you fail to raise and/or act upon concerns about patient safety when necessary, you are placing your own professional registration at risk. Ignorance of the guidance will not serve to protect your position, as the updated version of GMP specifically refers to doctors’ responsibility to be familiar with and follow both GMP and its supporting guidance.

Of course, many doctors feel extremely reluctant to raise concerns about their colleagues. A 2011 study published in BMJ Quality & Safety found that, of nearly 3,000 doctors questioned, approximately 40 per cent did not believe they should report “all instances of significantly impaired or incompetent colleagues”.

The purpose of this article is to draw together the various strands of guidance set out in GMP and its explanatory guidance to ensure that you are aware of your responsibilities relevant to the thorny issue of problem colleagues and patient safety.

The key message is that set out at paragraph 1 of the GMC’s Raising and Acting on Concerns about Patient Safety, namely: “All doctors have a duty to act when they believe patients’ safety is at risk, or that patients’ care or dignity is being compromised.”

The most relevant segment of GMP itself can be found at paragraph 25, which provides: “You must take prompt action if you think that patient safety, dignity or comfort is or may be seriously compromised”. The guidance goes on to state that if a patient is not receiving basic care to meet their needs, you must “immediately” tell someone who is in a position to act ”straight away”. Should patient safety be at risk because of inadequate premises, equipment or other resource issues, you should put the matter right if possible, or raise concerns in line with GMC guidance and your workplace’s policies, making a record of the steps taken.

Should your concerns involve a colleague who may be putting patients at risk, you should ask for advice from a trusted colleague, your defence body or the GMC. GMP further states: “If you are still concerned you must report this, in line with our guidance and your workplace policy, and make a record of the steps you have taken.”

The GMC has also introduced explanatory guidance regarding sexual boundaries. Sexual Behaviour and Your Duty to Report Colleagues states that if a patient “tells you about a breach of sexual boundaries, or you have other reasons to believe that a colleague has, or may have, displayed sexual behaviour towards a patient, you must promptly report your concerns”. Any suspicion of sexual assault or other criminal activity must also be reported to the police.

All of the guidance above should be balanced against your GMP obligations relating to teamwork, which require doctors to work “collaboratively with colleagues”, treating them fairly and respecting their skills and contributions. In each case you must use your professional judgement, as real-life situations are rarely black and white.

In the event that you do need to raise a concern the GMC advises doing this first with a manager or consultant. Should the matter involve a GP partner, it may be better to raise it outside the practice – for example, with the local medical director or clinical governance lead. Doctors in training might consider speaking with a postgraduate dean or director of postgraduate general practice education.

It is essential to be “clear, honest and objective” about the reason for your concern and you should acknowledge any “personal grievance that may arise from the situation”. Again it is important to keep a record of the steps you have taken to deal with the issue.

You should contact the GMC directly – or another body with authority to investigate the issue – in the following circumstances:

• If you cannot raise the issue with the responsible person or body locally because you believe them to be part of the problem.

• If you have raised your concern through local channels but are not satisfied that the responsible person or body has taken adequate action.

• If there is an immediate serious risk to patients, and a regulator or other external body has responsibility to act or intervene.

You might consider making your concerns public if you have exhausted all avenues where you work, or with an external body, and have good reason to believe that patients are still at risk of harm. However, such disclosures must comply with the Data Protection Act and not breach patient confidentiality.

Raising a patient safety concern, or receiving such a concern, is never easy. However, in the 2013, post-Francis world, it has never been more important to keep patient safety uppermost among priorities in your everyday practice.

Remember that the advisers at MDDUS are available to discuss any concerns you may have over complying with GMC guidance.

Andrea James is a partner at JMW Solicitors and specialises in representing healthcare professionals. Contact details: andrea.james@jmw.co.uk or phone 0161-828-1837 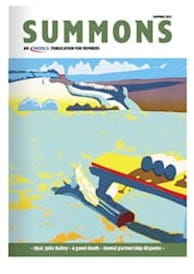